What is Soccer (Association Football)?

Known as Futbol or Association Football in countries outside of the U.S., Soccer is the most popular sport throughout the globe with over three billion fans. Adored for its simplicity and elegance, it's gaining fans and players every day.

Soccer is world renowned as the sport that never stops. With national teams, league tournaments, and exhibition matches, the professional players are always in the spotlight. Not to mention the World Cup every four years which takes close to a month to complete and garners viewership close to one billion for the final. 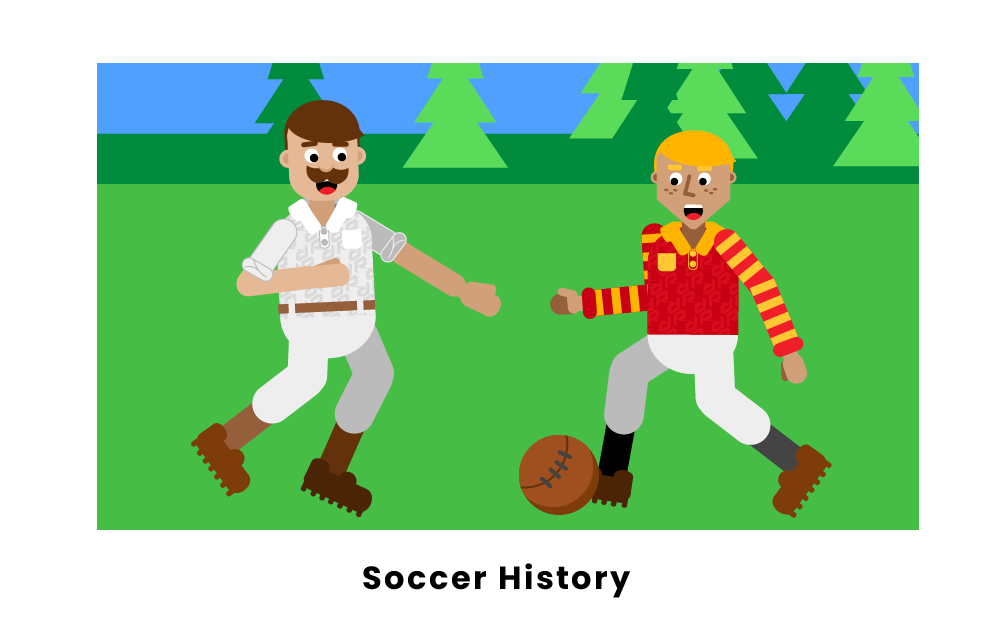 Although debated, it is said that soccer was played in Ancient China over 2000 years ago. Some other places like Japan and South America also played variations of the game long ago. However, it is agreed upon that it was in England that the sport as we know it today was finally made official. Football (soccer) had been developed, but was banned a number of times due to riots and violence before finally being named an official sport in the 19th century. It was in 1855 that the first official football club was formed: Sheffield F.C. The oldest club in existence today is Notts County, formed in 1862.

Soccer games are played on a grass field with a width of 90 meters and a length of 120 meters, the soccer field is universally known as the pitch. On the pitch, there is a center field line used for kick off and two 18 meter goalie boxes on either side of the field ahead of the goals. Inside the goalie boxes is the penalty box, which stretches 6 yards off of the goalline. The circle in the goalie box but outside of the penalty box marks where penalty kicks are taken, exactly 12 yards away from the goalline. 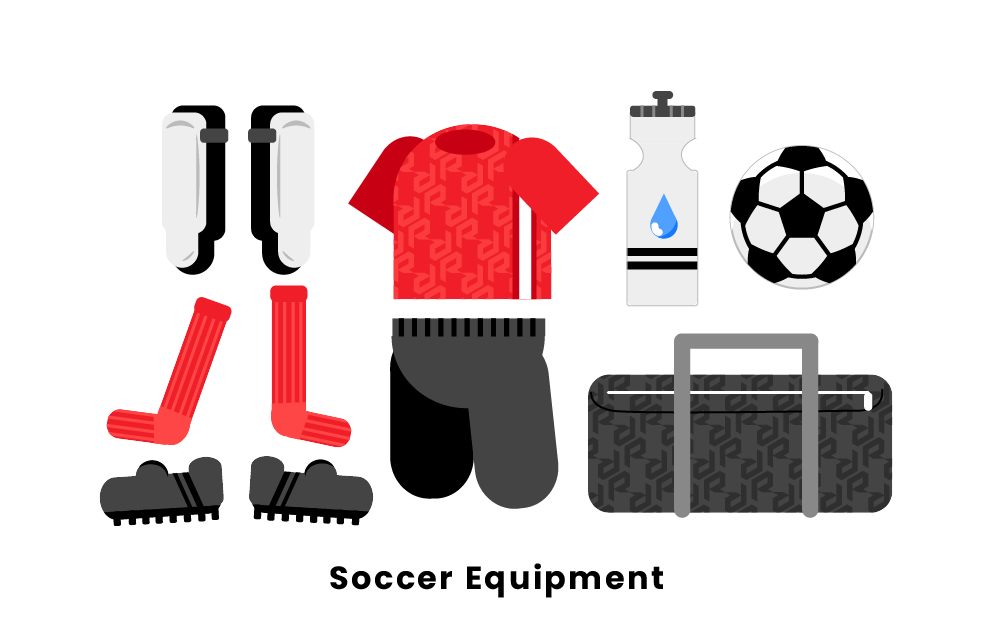 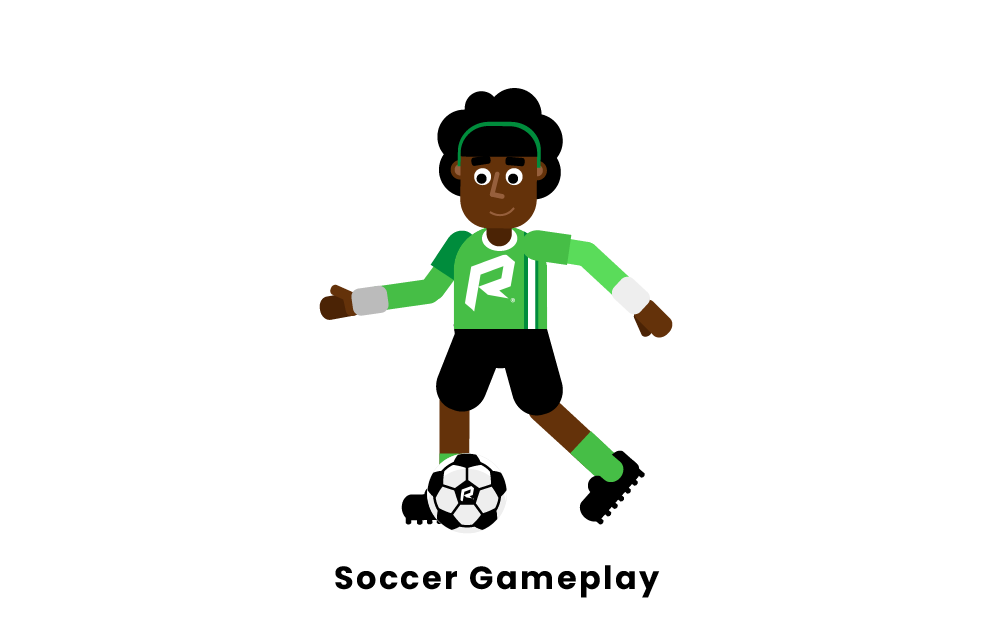 Scoring in soccer is all about getting the ball past the goalie into the net and because each goal is only one point the games can often end in a tie. In the league standings, the teams get one point for a draw and three points for a win, this points system creates a fair ranking used in tournaments.

Soccer is played using a mid-sized ball with a rubber center overlaid with synthetic leather. The slick leather surface is perfect for sliding the ball down the pitch. Competitively, the game is played by two teams of 11 with four different player classifications (goalies, midfielders, strikers and defenders).

In each match, there is one center referee that runs on the field and two officials on either side of the field who are running up and down the sidelines of the pitch, often within feet of the ball in play. 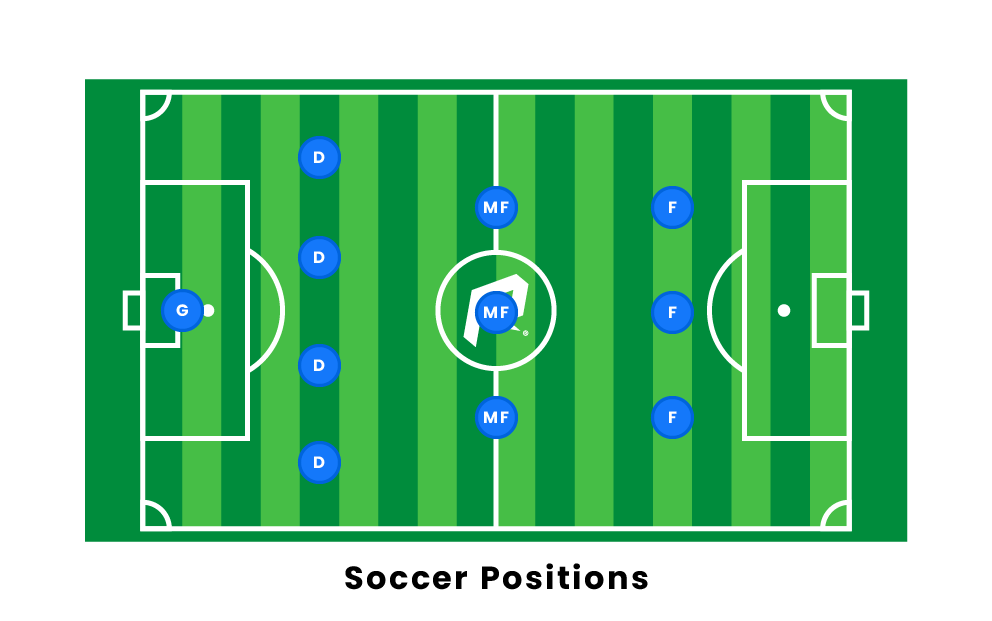 Each team has one Goalie and a mix of Midfielders, Strikers, and Defenders depending on the formation chosen by the coach. Field formations vary by team, but usually are defender and midfield heavy with two to three strikers at the most.

Below is a list of player positions and their roles: 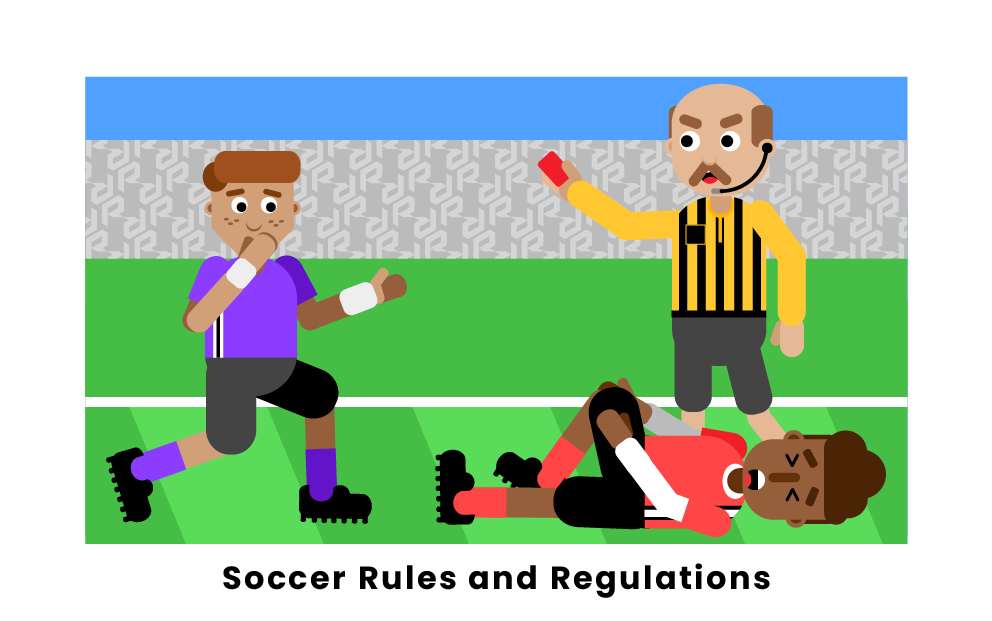 Soccer is often regarded as "The Beautiful Game" because of its intrinsic value and ease of play almost anywhere. When down to the basics, soccer is probably one of the easiest sports to understand. However, there are some rules within the sport that may be confusing to those with little experience around the game. Here are some of those rules explained:

Offsides: An offensive player is ahead of the last opposing defensive player at the time the ball is kicked in his or her direction; past the midfield line.

Yellow Card: Shown to a player by head ref as a warning for dangerous or disruptive play; 2 yellow cards earns a red card.

Red Card: Shown to a player by head ref for extremely dangerous or disruptive play, results in expulsion from the match without substitute replacement; also leads to a suspension for the next game.

Extra Time: In a tournament setting, extra time is played if the game ends in a tie; this comprises two 15 minute halves of added time to determine the winner.

Penalty Shootout: If tied after extra time, a match goes to penalties; teams take turns shooting from the penalty spot for a best of 5 shootout.

Golden Goal: Sometimes extra time is played under golden goal conditions; this means the next team to score a goal automatically wins. 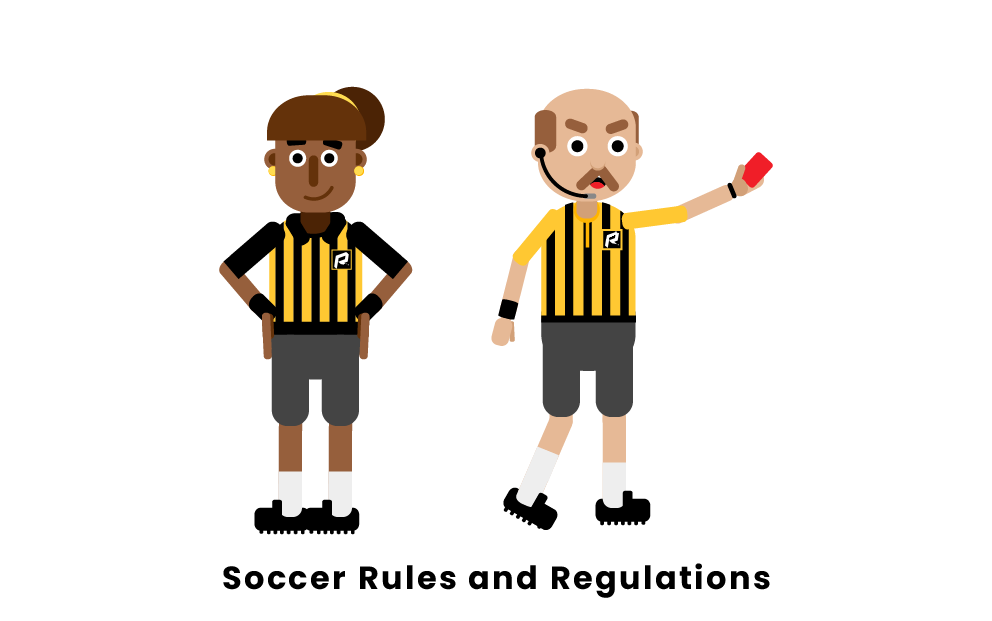 In soccer, there are three referees that are on the field during a match. First, there is the head ref, who has the highest authority in making calls and can overrule the other referees. The other referees are on either side of the field on opposite sidelines, and run horizontal to the position of the ball. This allows them to effectively make offsides calls as well as get a closer look while monitoring gameplay.

Off of the field there is another referee known as the Video Assistant Referee (VAR). This ref looks at the instant replays of controversial plays and has direct communication with the head referee. 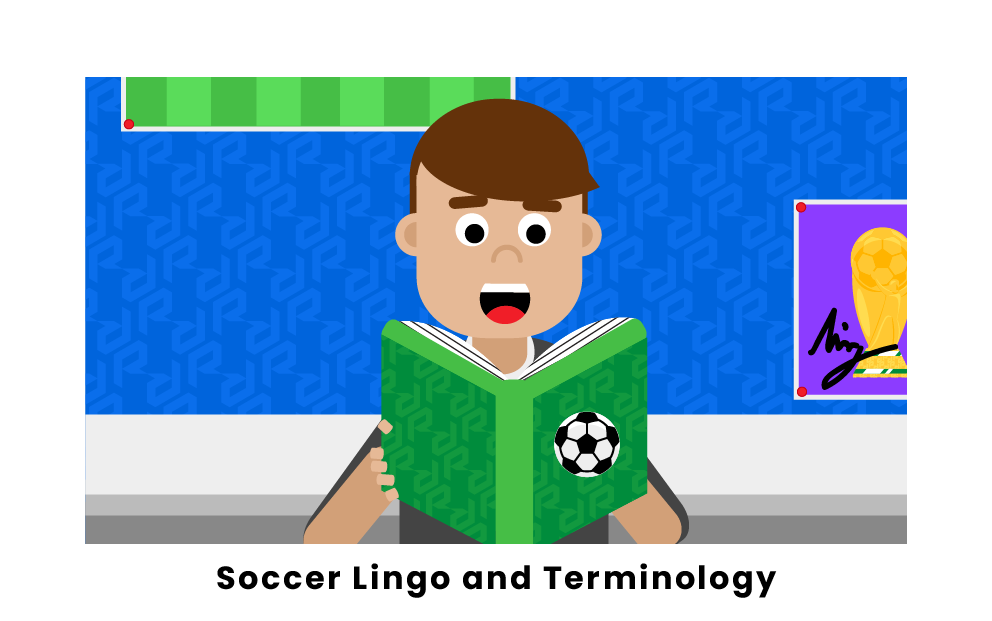 In soccer, there are some terms that tend to only be understood between soccer players themselves. These terms come from countless hours playing the beautiful game and have varied throughout the years.

Some of these phrases and their meanings are listed below. 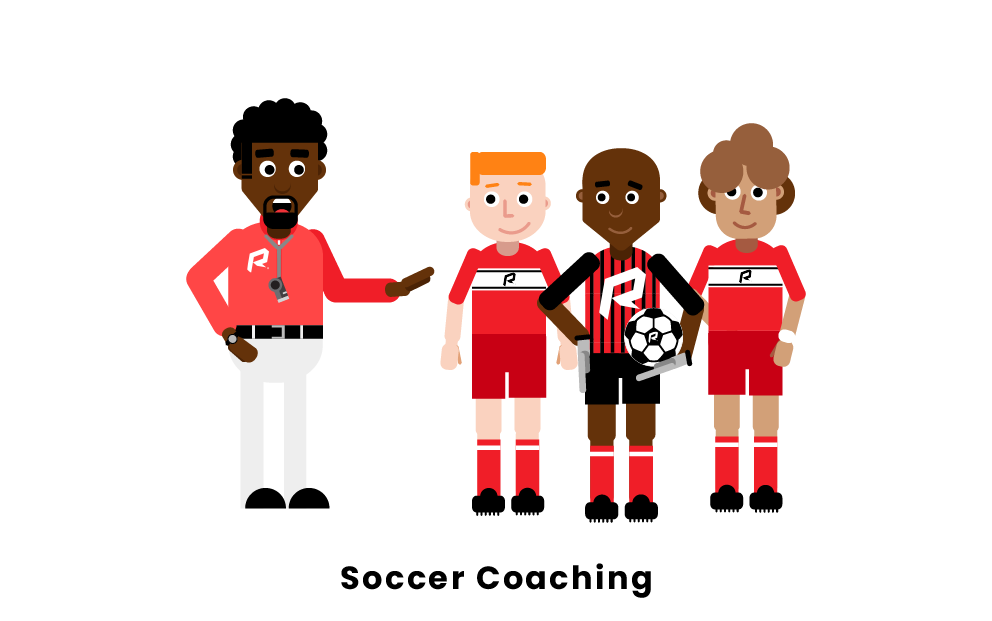 It is often the players that are accredited with the greatest successes of their teams and nations. However, soccer coaches are one of if not the most important piece of a team's success. Coaches are responsible for the teams strategies, lineups and substitutions, training, and much more. They must win over the respect of their players to best have authority to be the decision maker for a team. 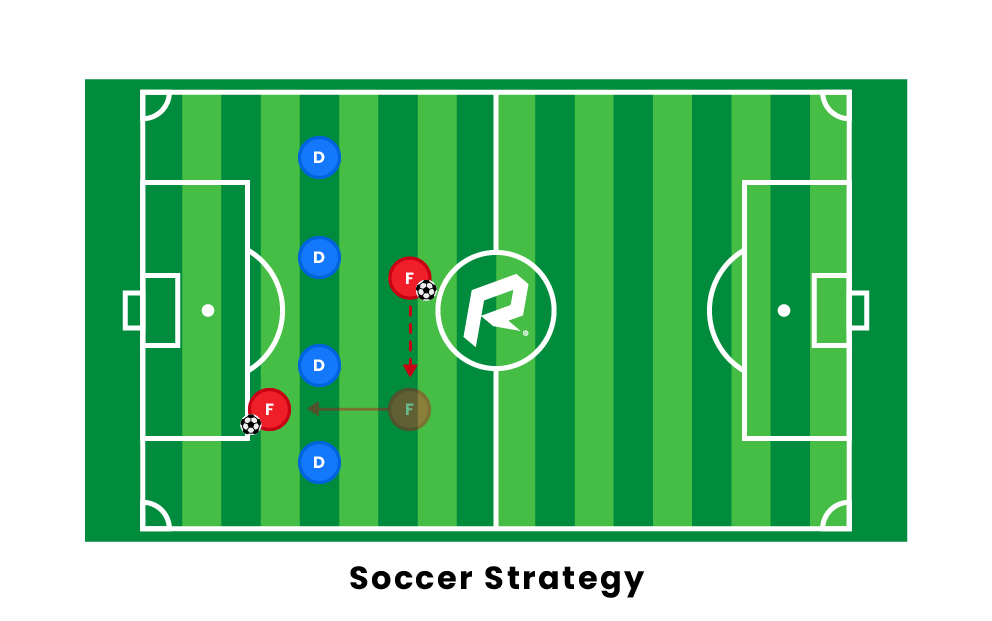 While in and of itself a simple game, soccer is like a game of chess for coaches and managers. The strategies involved in some of the most successful teams are very articulated and purposeful tactics. There are plenty of different strategies employed by different teams and coaches, but here are some of the variations that many managers tend to try. 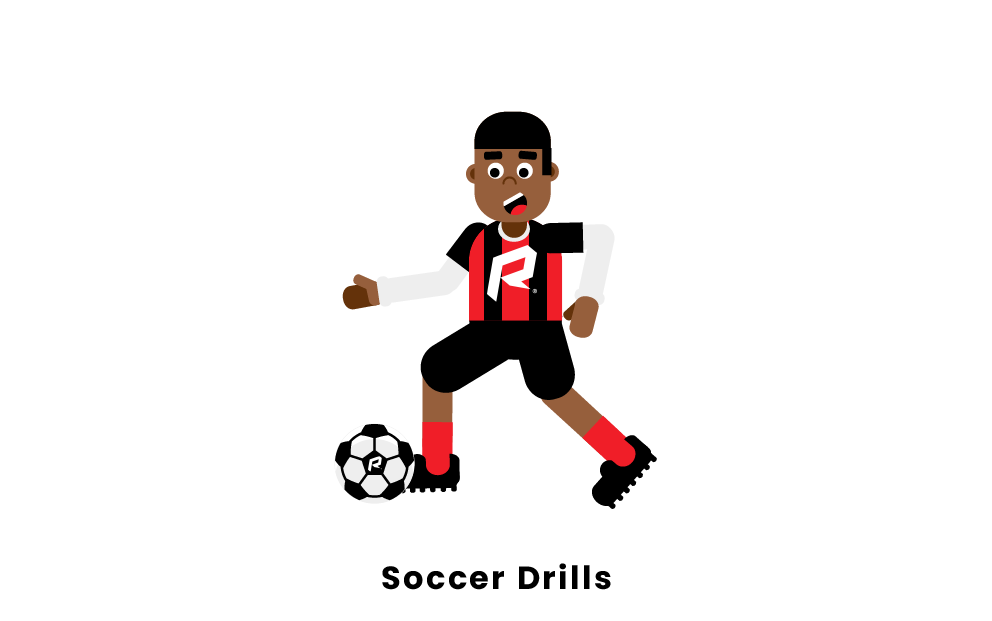 Soccer drills are carried out during practice sessions and are done to improve skills in several different areas of expertise. With enough practice, some drills and skills can be mastered and used in games to gain an advantage over the opponent. There is almost and endless list of practical soccer drills, but here are the different areas one can focus on developing: 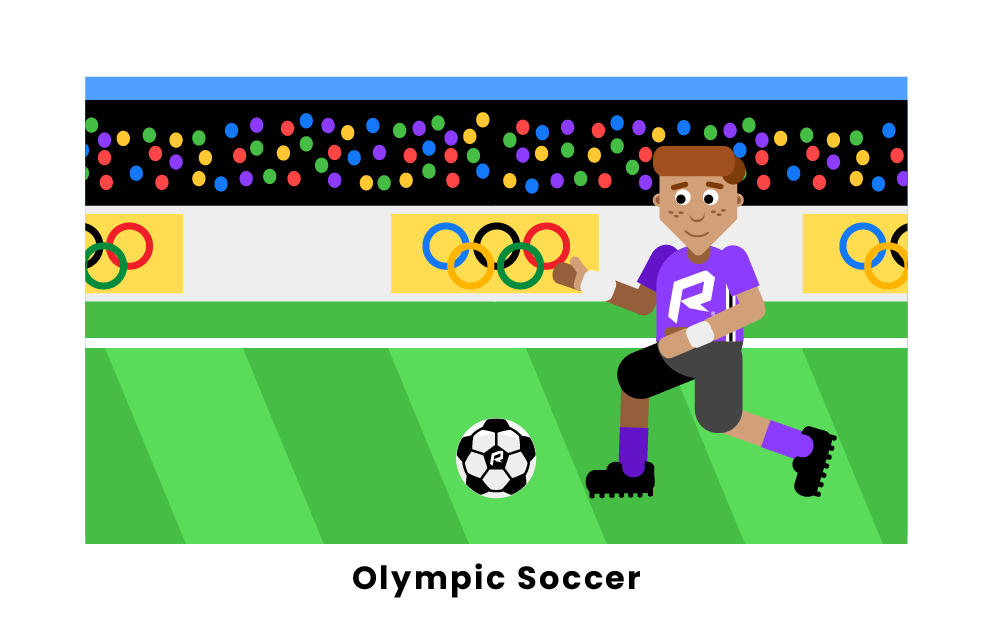 Soccer (football) is featured every four years in the Summer Olympic Games. Soccer in the Olympics is different from the World Cup in several ways. First, the men's and women's Olympic tournaments feature 16 and 12 teams respectively. In addition, the men's tournament has a unique rule which prohibits having any players over the age of 23 on the roster (with a three player exception). The men's tournament has been won by countries from Europe, South America, and Africa, while the women's has been won by only three different nations (USA, Germany, Norway). The women's tournament was added to the Olympic programme in 1984. 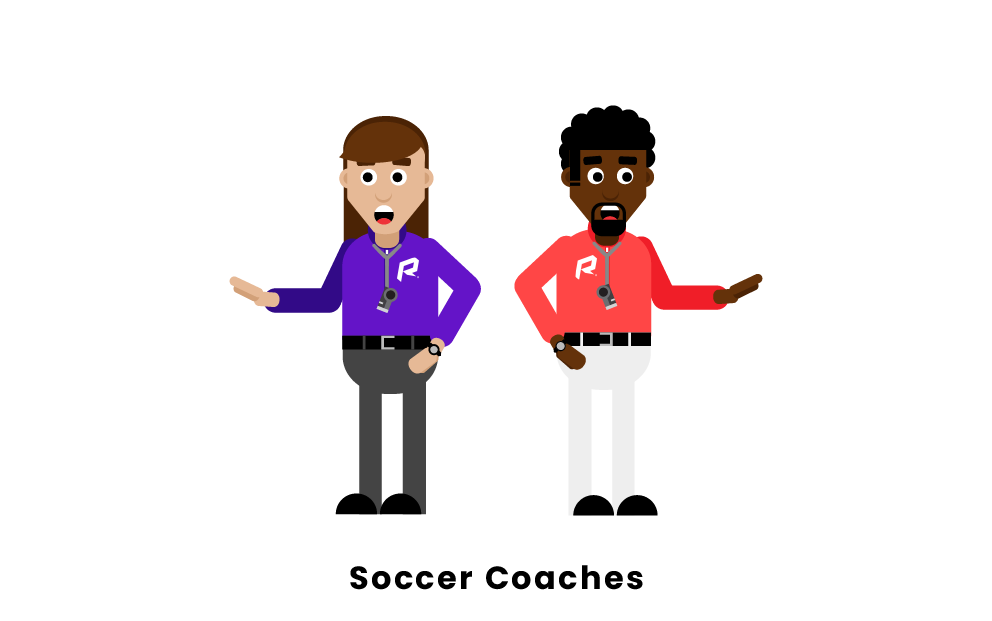 Some of the best soccer coaches and their teams are listed below. 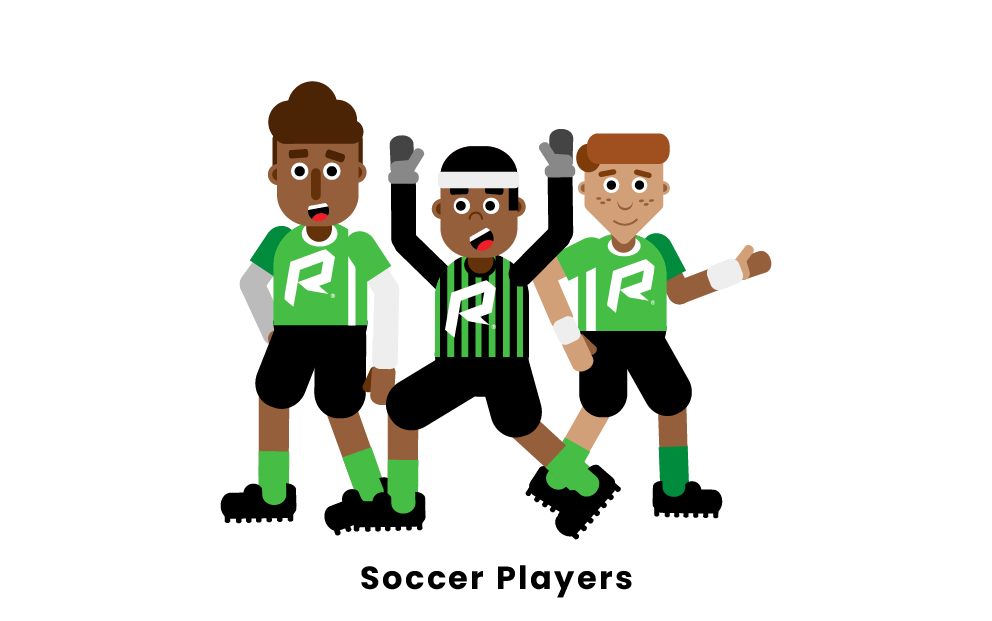 Being the most popular sport in the world, it is quite an achievement to be among the "best of the best" in soccer. To reach the top, players must spend many years perfecting their game as well as learning to become an incredible teammate. The most famous players tend to be the highest goalscorers, but the list of the best to ever play does not exclude other lower-scoring positions. Below are some of the most well known and prolific players to play the sport of soccer, along with their team and position. 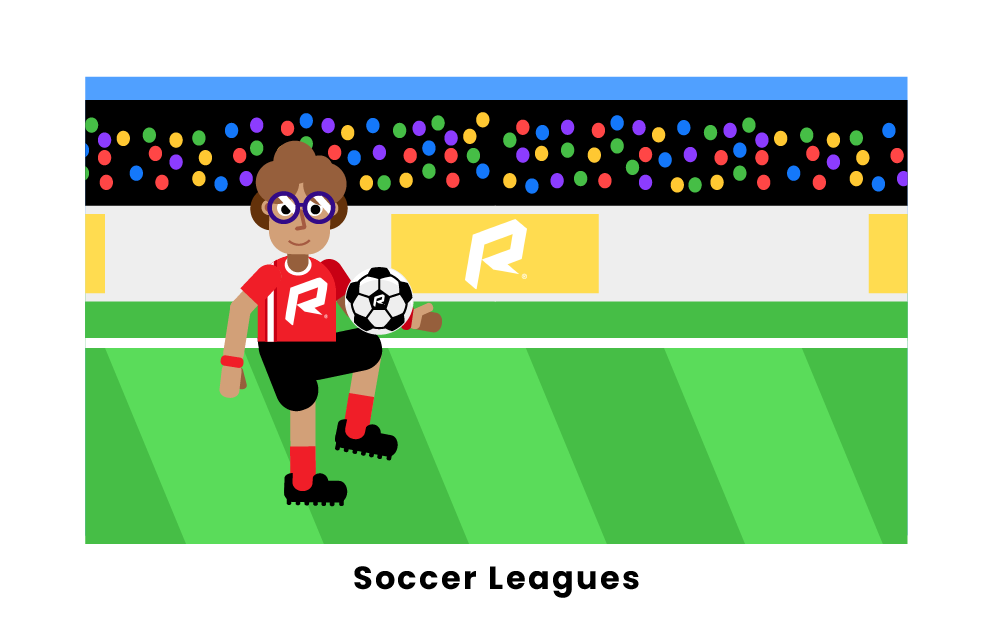 At the professional level, soccer teams play in a league usually made up of 10 to 30 teams. Generally each country has their own domestic system of professional leagues, with the top tier league being the most renowned and lucrative of the leagues. A team wins a league when they earn the most amount of points at the end of the season, usually 35-40 games. Teams can also win tournaments that are built into the league. Some of the world's top soccer leagues are listed below. 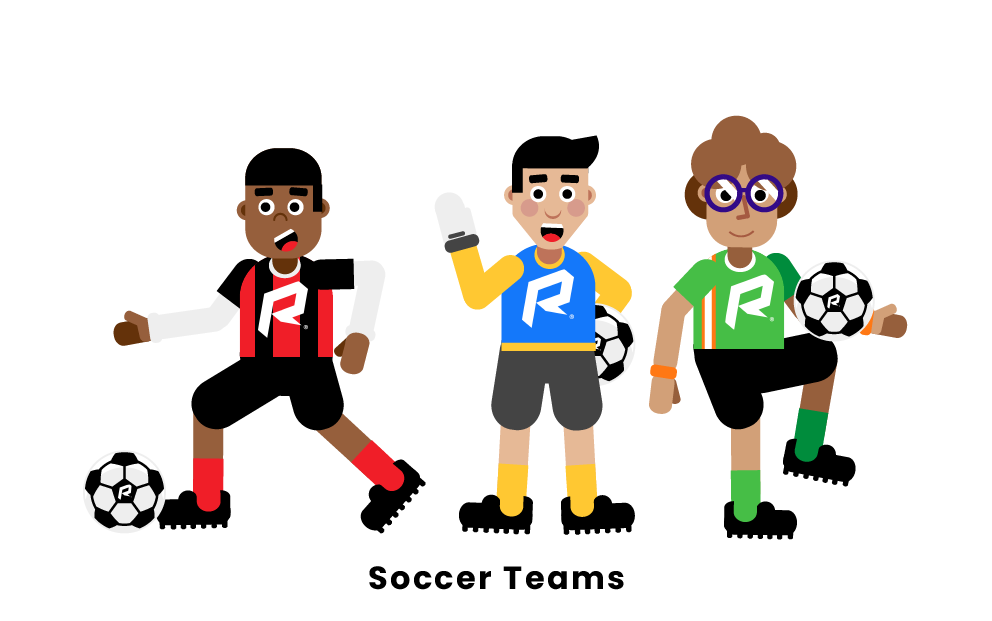 A professional soccer club must field 11 players at a time, and can have a range of different amounts of substitutes available depending on the league or tournament. With hundreds of leagues and teams made up of millions of soccer players worldwide, there exists a fierce competition to the top of the totem pole of the best soccer teams in the world. However, some clubs and teams are renowned for their consistent success and trophies won as some of the best on the planet. Here are a few: 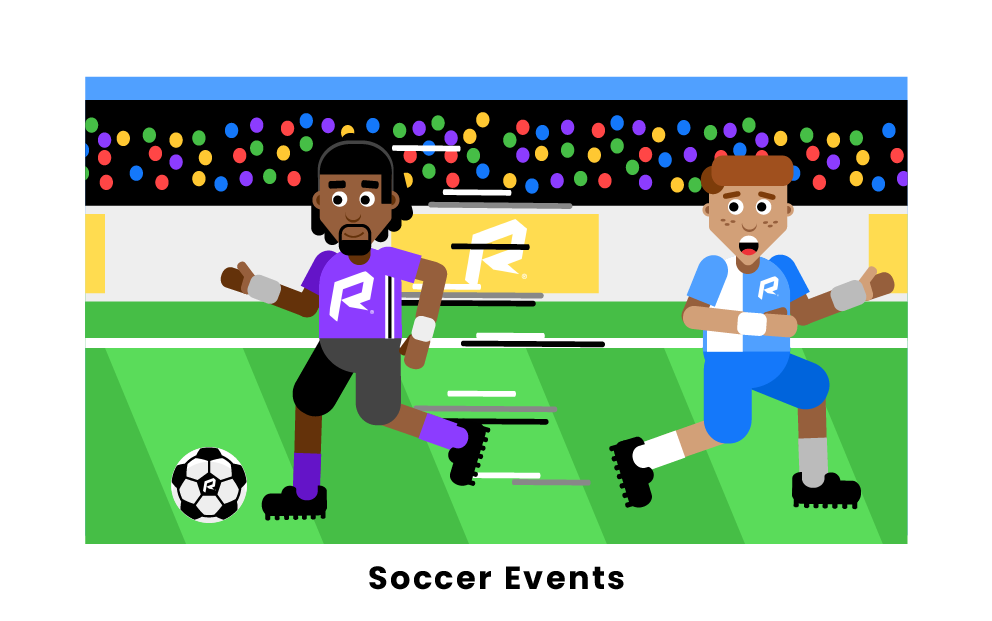 The biggest events in soccer include several iconic games and tournaments that are played around the world. The most famous event in soccer is the FIFA World Cup, an international tournament featuring some of the strongest 32 teams in the world. In fact, the 2018 World Cup recorded a record 3.5 billion viewers worldwide. Soccer events can be as small as a simple gathering for playing and as large as a worldwide tournament reaching billions. 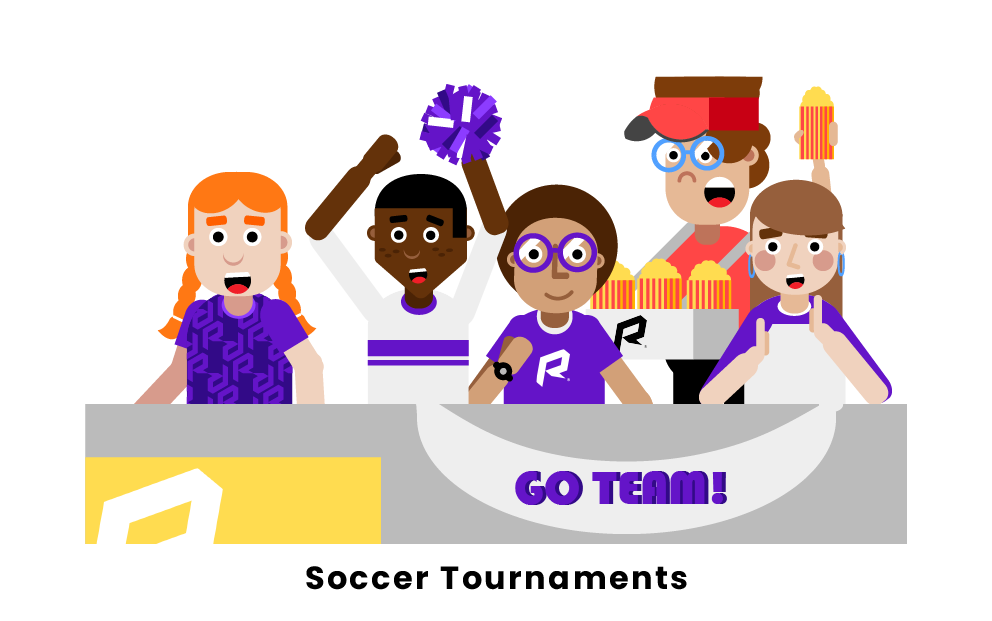 Soccer boasts some of the most popular tournaments around the world. The most popular of these are the FIFA World Cup and the UEFA Champions League. The World Cup brings together the top 32 national soccer teams to compete for one of the sport's highest honors. The Champions League brings together Europe's best professional club teams to play for the greatly sought for title.

Within each professional league, there is often an intra-league cup that is played aside from the regular season league games. This is generally not as prestigious compared to winning the league title. Another tournament that is played is the confederational tournament, which consists of an inter-continental tournament between a given continent's nations. For example, the European tournament is called the Euro, which is held every four years. 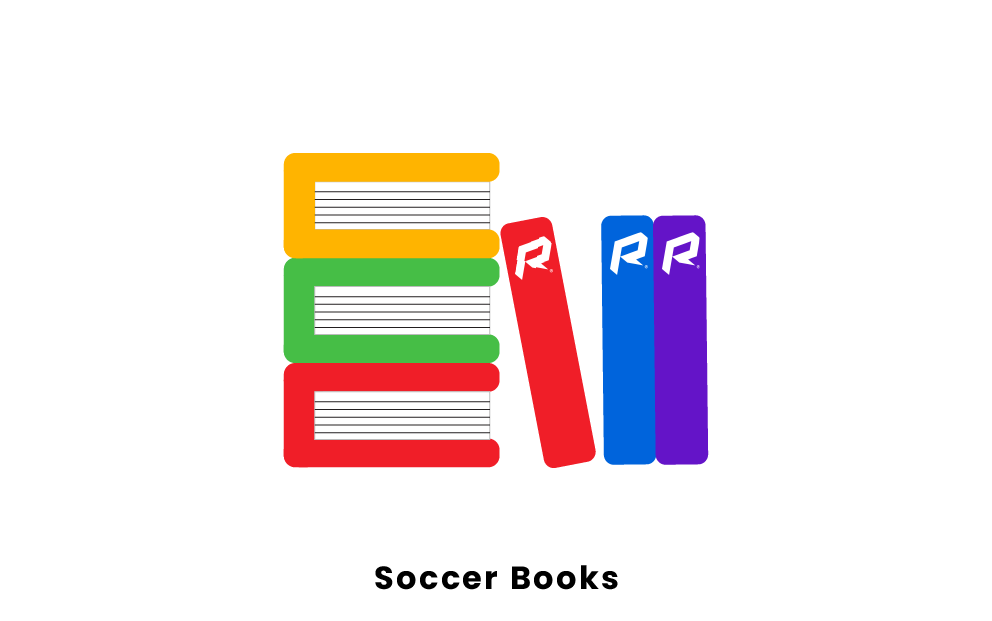 The sport of soccer provides a fascinating history and involves an unending amount of different strategies, teams and players. From these incredible stories have arrived some top tier books that attempt to bring the sport to life for the reader. Some of the best regarded soccer books are listed below: 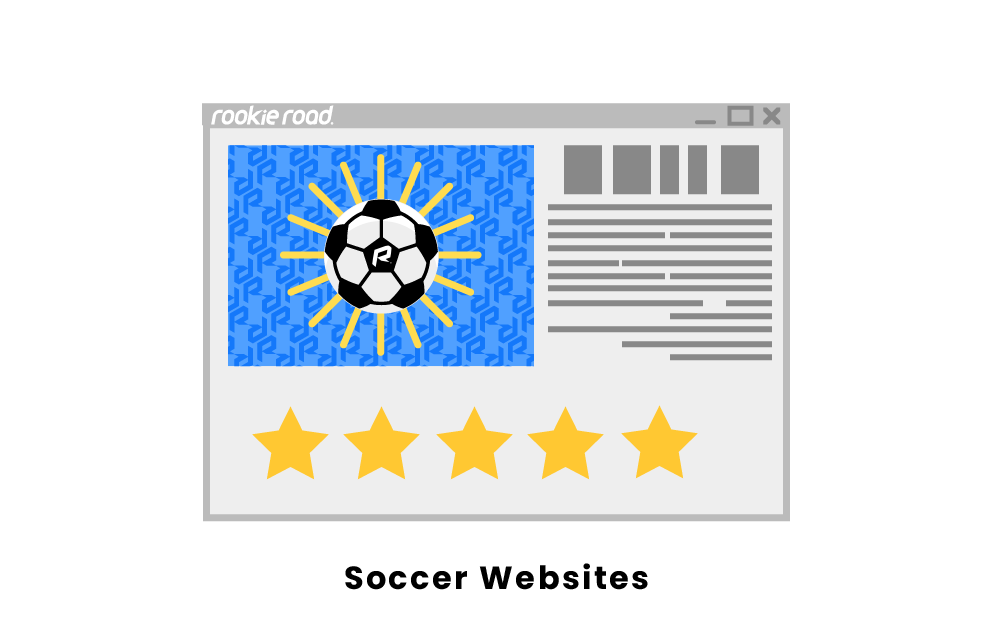 Accessing the sport of soccer can be as easy as a simple Internet search to satisfy curiosity. There are many resourceful websites on the net that provide great insight or information about soccer. These websites range in type from official league websites to tutorial and training websites for self-improvement.

Some of these websites are listed below.

Is it called soccer or football?

Both terms are correct. In the U.S. and Canada it is most commonly called soccer, but the rest of the world says football or fútbol. The most technical or proper term is association football.

What is offsides in soccer?

Offsides occurs when a shot or a pass is attempted to a player who is past the last remaining defender of the opposing team. If past the midfield mark, you may not pass the ball to your teammate if they are (at the exact moment of the pass) behind the final defender or player (aside from the goalkeeper) on your opponent's side of the field.

When is the World Cup?

The FIFA World Cup occurs every four years. The tournament has taken place since 1930, where it was hosted by Uruguay. The women's tournament takes place one year prior to the men's, and debuted in 1991.

How long are soccer matches?

A soccer match lasts 90 minutes and is divided into two 45 minute halves. Stoppage time is added to each half under the discretion of the head referee. If tied, a match may end as a draw, go to extra time, or go to a penalty shootout.

Pages Related to What is Soccer (Association Football)?