What Are The Rules Of Soccer? 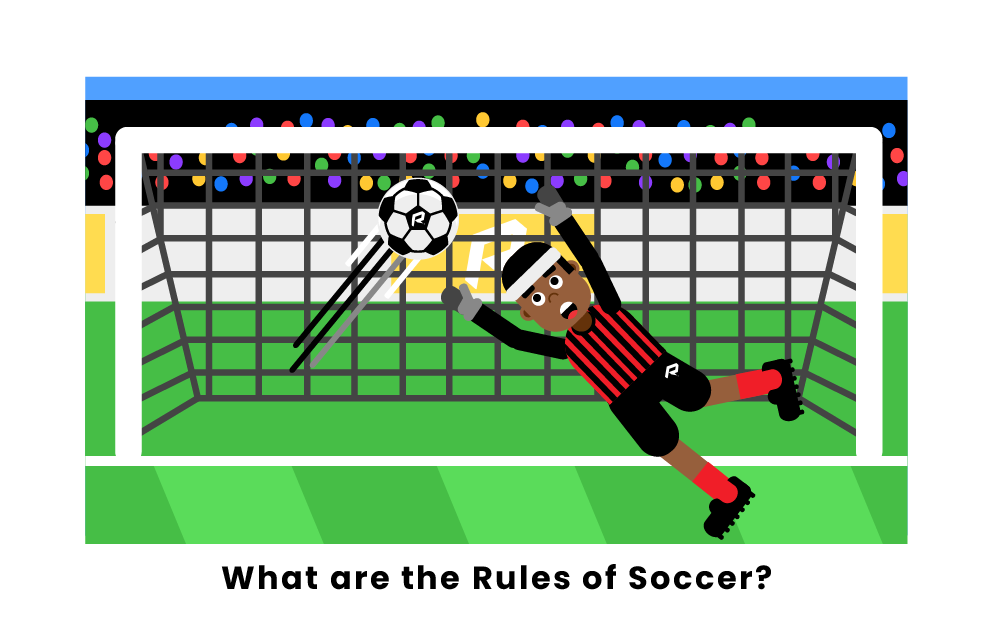 Soccer is an exciting sport that pushes your endurance, speed, and strength! The overall objective of the game is to kick the soccer ball into the opposing team's net. The team must rely on teamwork to pass the ball from one player to another in order to score goals. Players can only move the soccer ball using their feet, learning different techniques on how to run with the soccer ball and keep possession of the ball. Soccer games are usually split into two 45 minute halves, with coaching able to substitute players during quick pauses of the game.

Soccer is played on a rectangular field made of grass or artificial turf, with distinct boundaries. Important boundaries to note are a halfway line to divide the field into two, and from the centerpoint of the halfway line is a marked center circle with a radius of 5 yards.

Teams are allowed 11 players on the field during play, including the goalkeeper, more commonly known as the goalie. Players are required to wear a team jersey, shin guards, tall socks, and cleats as protective gear for every game.

The game starts with a coin toss, with an option to choose what goal a team would like to defend first or if a team can start with the soccer ball. The team that guesses the coin toss correctly wins and chooses either of those two options. Once the result of the coin toss is decided, all players will get in their positions and the referee will use their whistle to indicate the start of the game. This is called the kick-off. Kick-off also happens at the start of the second half of the game, and after a team scores a goal, the opposing team has the kick-off to restart the game.

When the ball is kicked out of the boundary lines, there are various ways to bring the ball back onto the field, depending on where the ball was kicked.

A goal kick is given to the goalie or a defender when an opposing player kicks the ball out of bounds over the defense team's goal line. The player who is kicking the goal kick usually tries to kick the ball far towards the opposing goal to get the ball away from their net.

When a ball is kicked out of bounds that is not past the defense or goal line, a throw-in occurs.A throw-in is when a player from the opposing team of the team that had possession of the ball last will grab the ball with their hands and throw the ball back onto the field, usually towards a player on the same team in order to get possession of the ball. The player must keep both of their feet on the ground while using both hands to throw the ball, staying behind the boundary line at all times. 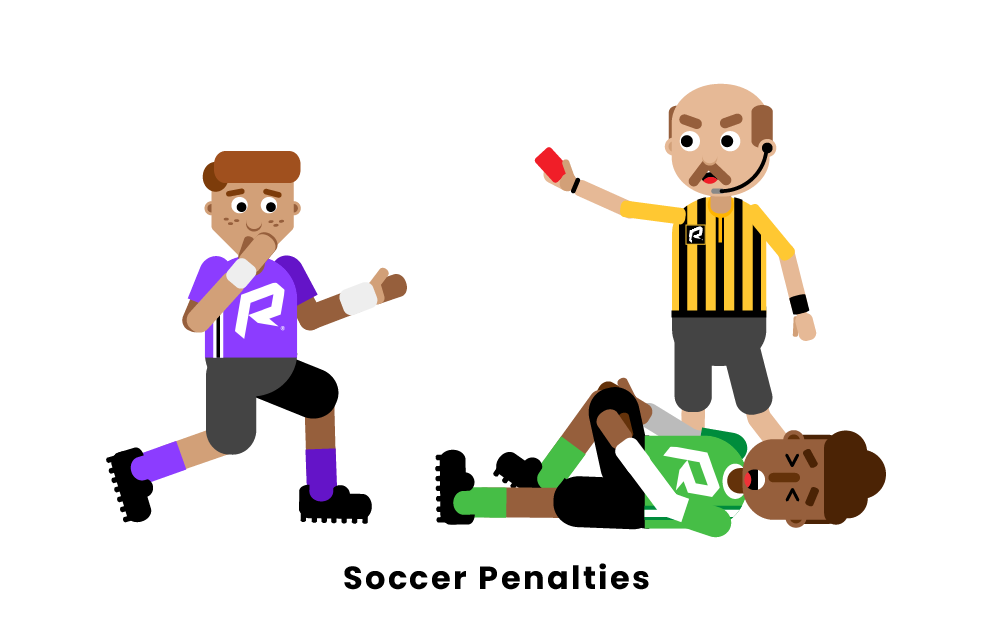 When a player engages in misconduct and/or foul behavior, the referee may call a penalty against them. The severity of the misconduct determines the consequence for the penalty. If a player kicks, trips, pushes, tackles, or another action of a similar infraction against an opponent, or commits handball, a direct free kick is awarded to the opponent.

A direct free kick is when the ball can be shot directly into the opponent's goal with any interaction from another player for the goal to count. A team is awarded an indirect free kick when an opposing player prevents the goalie from throwing the ball, or is offsides. A player is offsides when they are closer to the opponent's goal line then both the ball and the last defender.

An indirect free kick is similar to the direct free kick but the ball must touch another player before shooting towards the goal for the goal to count. A penalty kick is awarded by the referees when a player engages in misconduct stated above or commits handball, both in the team's penalty box. If this happens, the ball is put at the penalty spot and no other player can interfere with the ball until the ball has been kicked, except for the goalie who must stand at the goal line and protect the goal. If worse offenses persist, the referee may put down a yellow or red card, depending on the severity.

What is a handball in soccer?

The term handball refers to when a player touches the soccer ball with their arms or hands. This can happen when a player kicks the ball and the ball lifts off the ground and is moving in the air. The exception to this is the goalie; the goalie can grab the ball with their hands at any time. The consequence of the referee calling out handball is either a direct free kick or a penalty kick, depending on where the handball occurred.

What is a substitution in soccer?

A substitution is soccer is when one player from a team is swapped out with another player of the same team. Substitutions can only be done for a team during that team's throw-in, or the other team's throw-in only if that team is substituting players as well. In professional soccer, once players are substituted out of the game, they can no longer be re-entered back in. In collegiate soccer, players are allowed to re-enter the game once.

What is overtime in soccer?

When the second half of the game has finished, but both teams have the same number of goals, resulting in a tie, the referee will announce that the game must go into overtime. Overtime is extra given at the end of the game in order for one team to break the tie and win. The length of time for overtime is two 15-minute halves with a break between the two. This specific length of time, rather than having the overtime last until a team scores a goal, was done for players to be more strategic in their plays.

Pages Related to What Are The Rules Of Soccer?