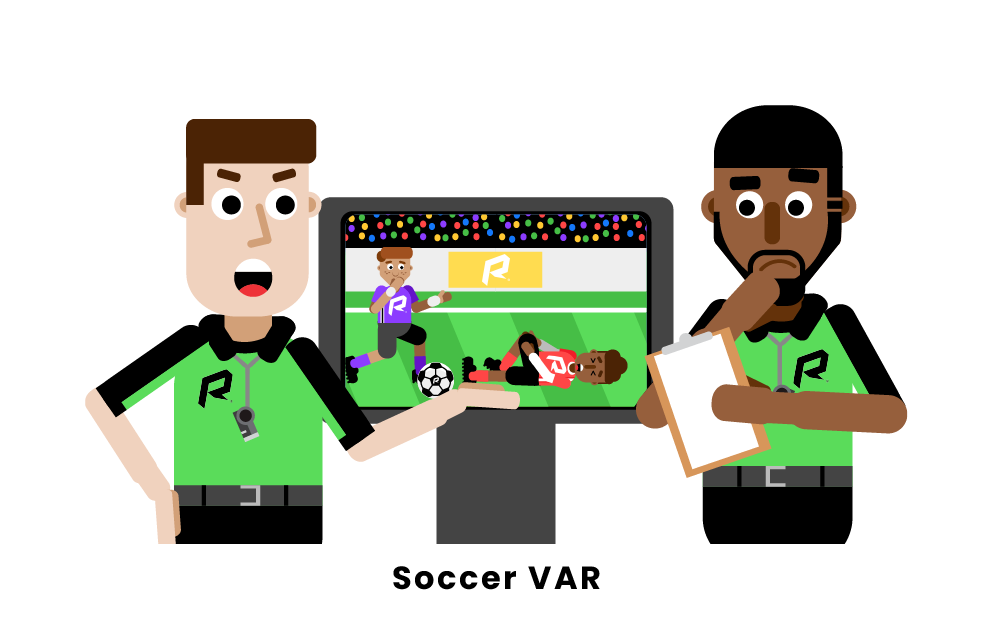 What is VAR in Soccer?

Video Assistant Referees (VAR) are used in soccer to help eliminate the presence of clear and obvious errors that happen during matchplay. VAR was first implemented in a match during a 2016 international friendly match between France and Italy. It wasn’t until 2017 that a professional match used it, first done in a Confederations Cup match. Major League Soccer in the United States implemented VAR in the fall of 2017. The English Premier League voted unanimously for trials of VAR in 2018, and installed the system into regular season play in the 2019/20 season.

There are four in-match occurrences that have been deemed to be game-changing incidents that trigger the guidance of VAR: goals, penalty decisions, direct red card incidents, and mistaken identity. In any scenario involving an incident of this kind, the head referee reserves the right to call for VAR, or VAR can advise the ref that further review should be undertaken.

Goals are the most prominent of the four match-changing situations and are probably the most exciting excuse for VAR in soccer matches. The unique goal line technology has essentially eliminated the potential for any errors regarding whether the ball has crossed the goal line or not. From a general perspective, VAR’s role in goal decisions is to decide if there was any kind of infringement that should disallow a goal that was incorrectly allowed or deemed controversial.

Some key infringements include offsides calls, unseen incidents, and goal line decisions. Because of VAR’s capability, sideline officials are instructed to keep their flag down until the chance passes in a potential goal-scoring scenario.

Often a very controversial topic of soccer matches, the awarding of a penalty kick can entirely change the momentum of a soccer match. VAR can thus be used to clear up confusion around certain calls or catch penalties that were missed due to the speed of regular gameplay. Some of these situations include a double touch by the kicker, encroachment by other players or the goalkeeper, and feigning at the time of the kick.

Having a player get sent off in a match presents a vast advantage for the other team. VAR can be used to assure that no wrong decisions are made when discerning whether a player deserves a red card. Subjective variables that the VAR could inspect include the severity of the foul, where the foul took place, and the perceived intention of the offense.

There are some cases where a referee cautions, sends off, or disciplines the wrong player after a foul. In this scenario, VAR can step in to inform the referee that they have made a mistake and so the proper player can be assessed by the referee. In any VAR case, there must be a clear and obvious error for VAR to intervene. However, the head referee can always seek the VAR if deemed necessary, or VAR can suggest further review after in-play monitoring.

Who makes the final decision on a call?

The authority, no matter the circumstance, always remains with the referee of the match. While VAR may lead to an overruling or cancellation of a call made by the referee, it is the referee himself who has the final call and makes the final decision. Players have no say during the process of reviewing a play in the Referee Review Area (RRA) or even on the field.

How many referees are required for VAR?

There must be at least two referees on the VAR team, which are the Video Assistant Referee (VAR) and an Assistant Video Assistant Referee (AVAR). FIFA ruled this to be the minimum requirement when incorporating VAR into a match. There is usually a Replay Operator in the booth as well with the VAR team in the VAR room. If play goes on while VAR is reviewing an incident, the AVAR is responsible for watching the real-time gameplay while the other incident is reviewed.

Does VAR check every goal?

VAR will review every goal that happens, at least in the VAR booth. While most goals do not require input from VAR, every goal will be reviewed to be sure that no clear and obvious errors were not overlooked by the referee. The review will include the attacking possession phase of the goal scoring team, which starts with the first point in the phase of play leading to the goal and ends with the goal or incident.

Will VAR ruin the typical flow of the soccer game?

While VAR has significantly changed the officiating in the sport, the chief philosophy of this new technology remains: minimum interference-maximum benefit. This mission advocates for the typical uninterrupted style of gameplay and minimizes the interruption while creating a more fair playing field for all. While there are pros and cons to VAR, ultimately it is a progressive move for a sport that has changed very little over time.