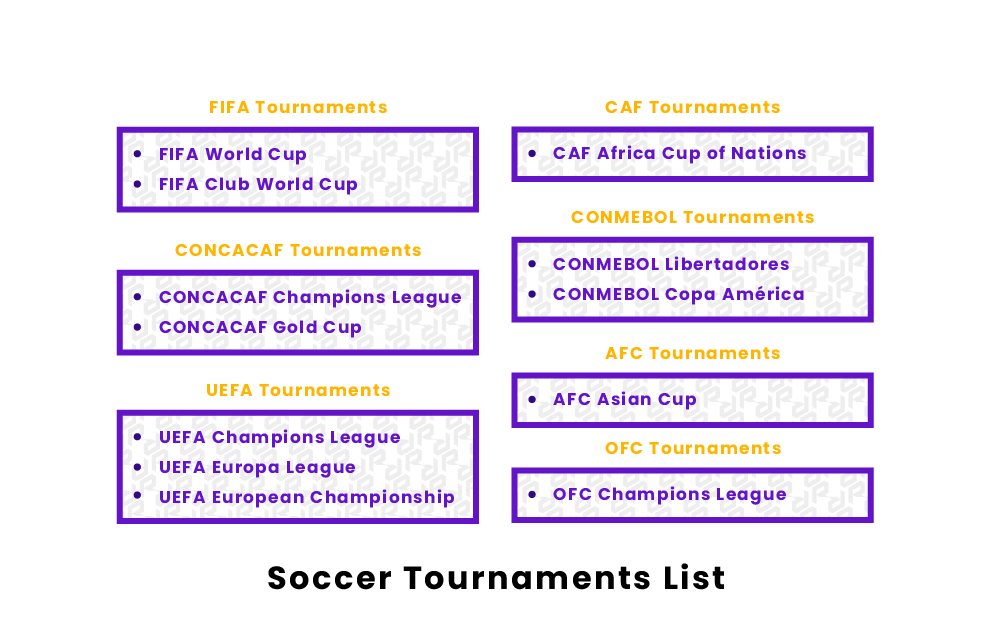 The Fédération Internationale de Football Association (FIFA) is the organization that governs international soccer competitions. It consists of representatives from each country with a FIFA recognized national club. FIFA is also the organization that chooses what nations will host the World Cup. The two most popular tournaments held by FIFA are the:

Organized by FIFA and held every four years at a chosen location, the World Cup is the world's most watched sporting event and determines the international soccer champion. Currently, 32 national teams participate (the host country & 31 qualifiers), but FIFA has approved changing the format to allow 64 participating teams. There is a FIFA sanctioned qualification process separate from the below competitions for the World Cup. In 2018, the competition will be held in Russia. In 2022, the competition will be held in Qatar.

The FIFA Club World Cup is a tournament that features the winners of each continental club competition in an international tournament. The winners of each of the six confederations and the host country participate, for a total of seven teams. The first edition of this tournament took place in 2000, and has been held every year since, besides 2001-2004 due to financial constraints.

One of the six continental governing bodies within FIFA is CONCACAF, standing for the Confederation of North, Central America and Caribbean Association Football. Like any FIFA division, they have their own tournaments amongst themselves, some which help determine which countries are eligible for the World Cup. The two largest CONCACAF tournaments are the:

The CONCACAF Gold Cup is a tournament held every other year between top North American, Central American, and Caribbean National Teams to determine the North American Champion. There has been only one year that the winner of the tournament was not either Mexico or the United States.

UEFA, short for Union of European Football Associations, is the governing body for continental competitions for both club and international soccer in Europe. UEFA holds multiple tournaments and season-long competitions each year. The top-flight tournament for European national teams is the UEFA European Championship, while the UEFA Champions League is the top-flight club competition in Europe. Read on to learn more about the most popular UEFA tournaments, which are the:

The UEFA Champions League is a season-long tournament featuring the best club teams from domestic leagues in Europe. The tournament consists of a group stage with 32 teams split into eight groups. These groups of four play each other twice, then the top two teams from each group automatically move on to the knockout stage. The knockout stage progresses from the round of 16 all the way to the finals, with each individual matchup featuring two legs. The final is the only round in which there is only one game played at a neutral site. The winner of the UEFA Champions League is often considered the best club team in the world, as it is the most prestigious club soccer tournament in the world.

CAF, short for Confederation of African Football, is the governing body for continental competitions for both club and international soccer in Africa. The largest tournament held by the CAF is the Africa Cup of Nations.

The Africa Cup of Nations, popularly referred to as AFCON, is a tournament between top African National Teams to determine the continent’s champion. The tournament has been held every two years since it was founded in 1957, and the winner is automatically eligible for the World Cup. Egypt currently holds the record for most AFCON wins, with 7 total titles.

CONMEBOL, also known as the South American Football Confederation, is the regional FIFA governing body for the continent of South America and its football teams. With 10 member associations, it is one of the smaller FIFA divisions, but it still has its own set of tournaments and eligibility regulations. The two largest CONMEBOL tournaments are the:

Copa América is a tournament held every 4 years to determine the greatest team in all of South America, even though teams from outside the region are routinely invited. Founded in 1916, the tournament follows a classic round-robin format until there is one champion of the final match. Uruguay and Argentina are tied for the most Copa América wins, with 15 total titles each.

Made of 11 member associations and two associate clubs, the Oceania Football Confederation is the smallest of FIFA’s six continental divisions. Still, they have their own set of tournaments, the biggest of which is the OFC Champions League.

The OFC Champions League is the premier tournament for the OFC division. Founded in 1987, the annual tournament has 18 club teams from across Oceania compete in a round-robin tournament until there is one winner left. The tournament’s winner is automatically eligible for the FIFA Club World Cup.

What are the biggest soccer confederations?

What is the biggest soccer tournament in the world?

By far, the biggest soccer tournament in the world is the World Cup. Every four years, the FIFA organization throws the largest event in soccer and one of the most popular sporting events in the world. After intense qualifiers, 32 national teams (including the host) compete until there is one winner decided. All matches are televised internationally and draw millions of spectators every year.