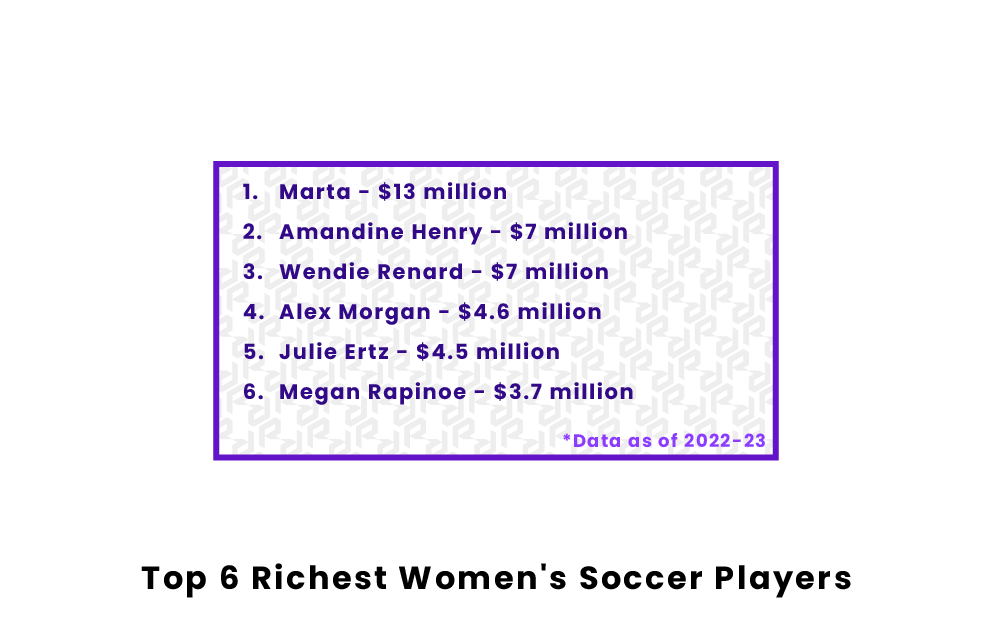 Soccer is an immensely popular sport that requires a lot of talent, skill, and physical ability. This leads to soccer being one of the most popular and well-funded sports in the world on the professional level. Below are six of the richest women’s soccer players of all time and how they managed to make their money.

Who Are The Richest Women's Soccer Players in the World?

Marta Vieira da Silva has a net worth of approximately $13 million. She is often regarded as the best female soccer player of all time, so it should come as no surprise that she’s also the wealthiest female soccer player on the planet. Marta plays professionally for the Brazilian national team and for the Orlando Pride in the NWSL. She has been awarded the FIFA World Player of the Year six times over the course of her career, five times consecutively from 2006-2010 and then again in 2018. Marta is currently playing on a contract that pays her $400,000 per year, one of the highest salaries in women’s soccer.

Amandine Henry is a French women’s soccer player whose net worth is approximately $7 million. She began her professional career at the young age of 15, playing for         Hénin-Beaumont, and by age 18, she was talented enough to earn a spot on France’s most prestigious team, Lyon. After battling a knee injury that kept her off the field for a year and a half, she returned and played for Lyon until 2016. Afterwards, she played for the Portland Thorns and Paris Saint-Germain before returning to Lyon in 2018, where she still plays currently. Henry has won numerous awards in her career, including a Silver Ball. She won a NWSL Championship in 2017 while playing for the Thorns and has won the Division 1 Féminine with Lyon 12 times.

French center-back Wendie Renard has a net worth of $7 million. The center-back plays for Lyon in the French Division 1 Féminine and the France national team, captaining both teams. One of the most accomplished players in women’s soccer, Renard has won a remarkable 14 French league titles and eight European Cups. Lyon is one of the most successful women’s clubs in the world, and Renard is the team’s foundation. Born in Martinique, she played youth soccer before making the Lyon team during a walk-on trial at age 16. She has been with the club ever since. Between salary and sponsorship deals, she earns nearly $400,000 per year.

Alex Morgan is a talented American-born striker known for her dribbling ability and speed, who has a net worth of $4.6 million. Morgan currently plays for the US Women’s National Team and the San Diego Wave in the NWSL, while she has previously played for the Tottenham Hotspurs of the FA WSL and the Orlando Pride, also of the NWSL. She is a three-time Olympian with two gold medals as a result of those trips. She has managed to record a remarkable 110 goals in just 180 international matches as of 2022. All of this results in Morgan playing on a contract that pays her $450,000 per year.

Julie Ertz is a multi-faceted player from the United States with a net worth of approximately $3 million. She is a rare hybrid style of player, as she can be an imposing defender or a holding midfielder that helps her team in a number of ways. Ertz is also a member of the US Women’s National Team and plays in the NWSL. She currently plays for Angel City FC, which is based out of Los Angeles, but she spent the majority of her career playing for the Chicago Red Stars. In 2019, Ertz was named the US Soccer Female Player of the Year following dominant seasons both domestically and internationally. Julie Ertz makes an annual salary of $430,000.

Megan Rapinoe is an outspoken American-born forward with a net worth of $4.2 million. Her unique, entertaining style of play and social advocacy has garnered her extreme amounts of attention from fans, the media, and even politicians. Rapinoe currently plays for the US Women’s National Team and the OL Reign of the NWSL. Among countless other achievements, Rapinoe’s most notable achievement would be winning the Ballon d’Or, the trophy awarded to FIFA’s Player of the Year, back in 2019. Rapinoe currently earns an annual salary of $447,000.

Carli Lloyd was a long-time veteran of the US Women’s National Team, earning an estimated net worth of $3.3 million. During her extensive career, she made herself a household name. This offensive-minded midfielder has been a key member of the US Women’s National Team over the past few decades, as she played in more World Cup matches (25) and Olympic matches (22) than any other USWNT player in history. Before finally retiring in 2022, Lloyd had been receiving an annual salary of $518,000, which made her the highest-paid player in the history of women’s soccer.

Norwegian striker Ada Hegerberg is worth $3 million. She plays for Lyon in the Division 1 Féminine and the Norway national team. Hegerberg represented Norway in youth international play. As an adult, she led the national team to a silver medal in the 2013 UEFA Women's Championship. Hegerberg was named the 2016 UEFA Best Women's Player in Europe as well as the 2019 BBC Women's Footballer of the Year. Her current salary with Lyon is $425,000.

Sam Kerr is an Australian-born striker with a net worth of around $3 million. She currently plays professionally for the Australian Women’s National Team and FC Chelsea in the FA WSL. Kerr is the face of Australian soccer, as she’s managed to produce great results in Australia and several other continents. She previously experienced a lot of success playing for Sky Blue FC and eventually the Chicago Red Stars of the NWSL before moving on to play for FC Chelsea in the FA WSL. She hasn’t faced much of an adjustment with FC Chelsea as she’s already helped win two titles in her first two seasons with the team. Kerr is paid $500,000 per year, which made her the second-highest-paid player before Lloyd’s retirement, but now she is the highest-paid female soccer player on the planet.

Who is the richest women’s soccer player in the world?

Which women’s soccer player has won the most World Cups?

The record for women’s soccer player that has the most World Cup wins is a 28-way tie among players who have two wins. The first women’s players to accomplish a second World Cup win were Americans Brandi Chastain, Mia Hamm, Michelle Akers, Christine Lilly, and Julie Foudy in 1999. Most recently, this record has been tied by 11 members of the US team in 2019.

Which women’s soccer player has scored the most World Cup goals?

Brazilian soccer player Marta has scored the most goals at the FIFA Women’s World Cup. In her five World Cup appearances, Marta has scored 17 goals, making her the all-time record goalscorer in the tournament’s history. Marta also sits in first place for women’s soccer players with the most Player of the Match wins, with five, a record she shares with Japan’s Aya Miyama and America’s Carli Lloyd.