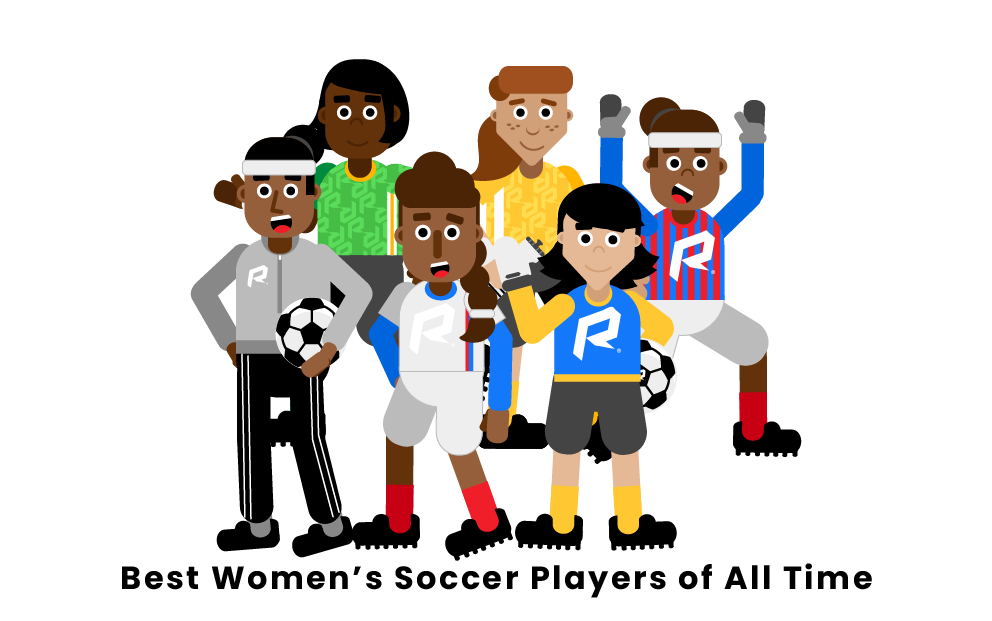 Who are the best women soccer players? 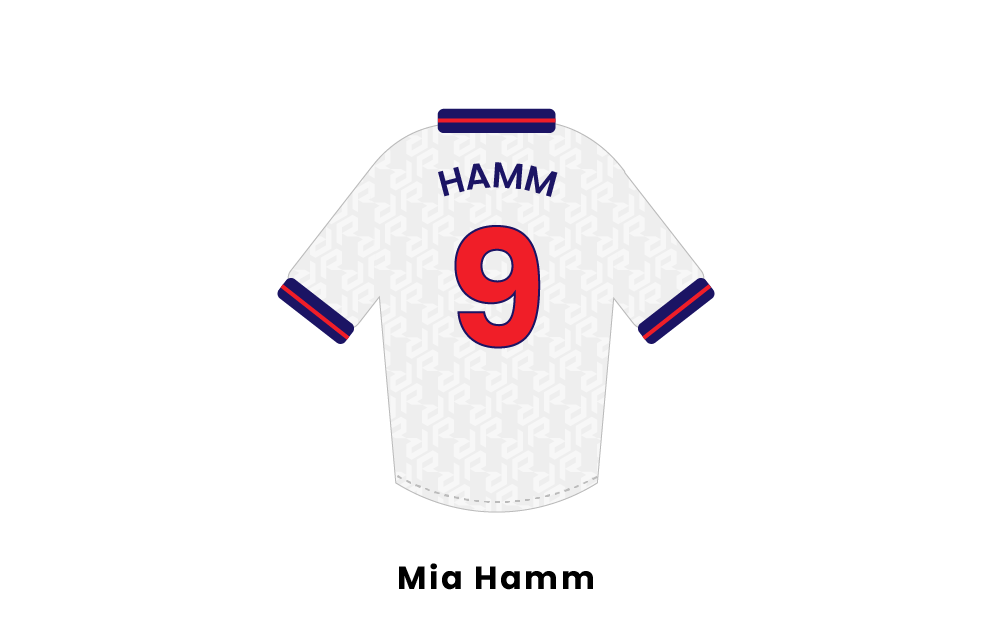 Mia Hamm could perhaps be recognized as one of the most prominent faces of U.S Soccer in history. Before her tenures with the University of North Carolina and the Women’s United Soccer Association, she began her international career with the United States Women’s National Soccer team at the young age of 15. At the time she had been the youngest person to ever participate in a match for the Women’s National team. She has a powerful winning history and leaves behind an impressive lineage of both professional and collegiate records behind her. She is noted to be one of the most famous soccer players of all time.

One of the most outstanding accomplishments Hamm completed at such a young age was leading the University of North Carolina to four NCAA Division I Championships in her 5 years with the team. During her 95 game campaign with the Tar Heels, they only lost one game the entire time. She was named ACC Female Athlete of the Year in 1993 and 1994 while also setting ACC records for goals, assists, and points.

As a 19 year old, Hamm led the 1991 U.S Women’s National Soccer Team to its first World Cup Championship as the youngest player on the team. She would continue her FIFA success in 1995 and would establish herself as one of the greatest female soccer athletes during the 1999 World Cup. During the 1999 World Cup, Hamm would break the all-time international goal record when she scored her 108th goal against Brazil. After a hard fought battle and multiple games throughout the tournament, Hamm and the 1999 US Women’s National Soccer team would go on to win the Championship title game against China and Hamm would solidify her spot in soccer history being praised for her leadership and inspiring performance.

Marta Vieira da Silva, better known as “Marta,” is considered one of the best women’s soccer players of all time. She began making her mark in soccer history when she joined Umeå IK, a Swedish women’s football club. During her tenure with the club, Marta led Umeå IK to four straight league titles and made a solid impact with her goal scoring abilities. While leading her team to consecutive successful seasons, Marta was named the FIFA Women’s World Player of the Year five consecutive times from 2006 to 2010. Her last two FIFA Women’s World Player of the Year awards came when she played for Santos, a Brazilian soccer club.

Marta helped solidify herself in soccer history during her international career. Pele himself named Marta as “Pele in skirts,” to which was widely appreciated by fans as a sign of respect to the great player. In 2007 at the Pan American Games, Marta led the Brazilian national team to a victory over the impressive United States U-20 team with a crowd of about 70,000 fans watching.

During the 2007 FIFA World Cup, Marta won both the “Golden Ball” and “Golden Boot” awards for the tournament. The Golden Ball is given to the best individual player and the Golden Boot is given to the top scorer. She also helped lead the Brazilian national team to two silver medals during the 2004 and 2008 Summer Olympics. One of her most recent achievements came after the 2019 Women’s World Cup where she became the first person to ever score a goal in five FIFA World Cup tournaments.

Christine Sinclair is perhaps one of the greatest scorers in women’s soccer. She began her rise to prominence during her college career at the University of Portland. As a freshman, Christine established her dominance as a scoring threat by leading all Division I freshmen in scoring with 23 goals. This accomplishment gave her some national recognition as she was named WCC Freshman of the Year and Soccer America Freshman of the year, along with a plethora of other team recognition awards. She would go on to have a historic career at the University of Portland finishing with 110 goals, 32 assists, and a whole list of accomplishments and awards throughout her collegiate campaign.

After college, she was drafted by the FC Gold Pride with the 8th overall pick in the inaugural 2008 Women’s Professional Soccer Draft. After having some success with the Gold Pride, she continued her professional career with the Western New York Flash for one season, and to this day is still playing with the Portland Thorns FC. Christine has a huge national presence when it comes to playing for her country’s senior national team. She has appeared in three Olympic Games, winning two bronze medals, played in five Women’s World Cups, and made her debut with the senior national team at the young age of 16. As one of the sport’s most prolific scorers of all-time she currently is the all-time leader in international goals with over 190 goals scored.

Michelle Akers is a retired American soccer player that dominated the international soccer scene during the late 1980s and 1990s. Akers was a part of the US National Women’s Soccer team since its inception in 1985, and participated in the first FIFA Women’s World Cup in 1991. Her American squad was able to bring home the World Cup trophy in both 1991 and 1995.

Akers was also a part of the gold medal-winning American squad during the first Olympic women’s soccer tournament in 1996. She recorded a total of 105 goals and 37 assists in her international career.

Abby Wambach is one of the most recognizable figures in US Women’s soccer history. She established herself as a reliable forward and provided her team with a strong scoring presence. She is famously known for scoring goals with her “diving headers.” She is a proven winner, and has won a multitude of titles from when she was a young girl to playing on an international stage.

For college, she chose the University of Florida Gators over top schools such as UNC and UCLA because she wanted the challenge of helping a newly established team. During her freshman year, she led the Gators to their first Division 1 NCAA title. She would go on to lead the team to four consecutive SEC titles. Wambach would also be rewarded with a list of accolades, such as SEC Freshman of the Year and two-time SEC player of the year.

Professionally, Wambach had outstanding runs with both the Washington Freedom and the Western New York Flash. However, she was known for her prolific international career with the United States Women’s National Soccer team. She has competed in 4 different World Cup tournaments and has led her team to two Olympic gold medals in 2004 and 2012.

Sun Wen was one of the best soccer players from China and a feared player by all competitors. Her impact and presence on the game remain unmatched by almost any other female soccer player.

Sun was drafted by the Atlanta Beat with the first overall pick in the Women's United Soccer Association inaugural draft. During her tenure with the team, she would have a huge impact on the game and be a valuable asset for the Beat. However, her stint was cut short by injuries and then preparation for the 2003 FIFA Women’s World Cup.

Sun rose to prominence as an impressive scorer at the international level. She started playing for the Chinese National team at the young age of 17. She went on to score 106 international goals, the most international goals scored by a female Chinese player. She even almost successfully led an upset over the US Women’s National team on two separate occasions. She helped her team win the Asian Cup four times, led the Chinese national team to participate in four world cups, and would go on to play in two Summer Olympic Games (earning a silver medal in 1996).

Homare Sawa established herself as one of the greatest playmakers in women’s soccer history. She is also considered to be the best Japanese women’s soccer player of all time. She began playing professionally at just the young age of 12 when she was brought up to play with Yomiuri Beleza, now known as NTV Beleza. She played over 136 matches and scored 79 goals in league play. After, she played for the Atlanta Beat for a short while and scored the first goal in franchise history.

Sawa was an elite force internationally. When she was 15, she scored four goals in her first international debut. She has an impressive record of international play with the Japanese National team, playing in multiple Olympic Games and even more FIFA World Cup appearances. She was named captain of the Japanese National team during the 2011 World Cup, with Sawa’s leadership and great play she led the team to their first World Cup title. Prior to taking a short retirement period, she again proved her leadership and led the national team to a silver medal during the 2012 Olympics. After coming out of retirement she returned to play internationally and played in her sixth World Cup. This accomplishment would allow her to be one of two athletes to have ever participated in six World Cup tournaments.

Before she rose to international fame, Kristie Lilly led her college team, the UNC Tar Heels, to four national championships.. After college, she was a founding member of the Boston Breakers and played every one of their inaugural games before focusing on international soccer. Known informally as the “Queen of Caps,” Kristine Lilly had a remarkable 24-year career playing for the US Women’s National Team and represented her country a record 354 times. During those years, Lilly played in five World Cups, winning the title with her team twice (in 1991 and 1999). She also played in the Olympics, winning gold in both 1996 and 2004.