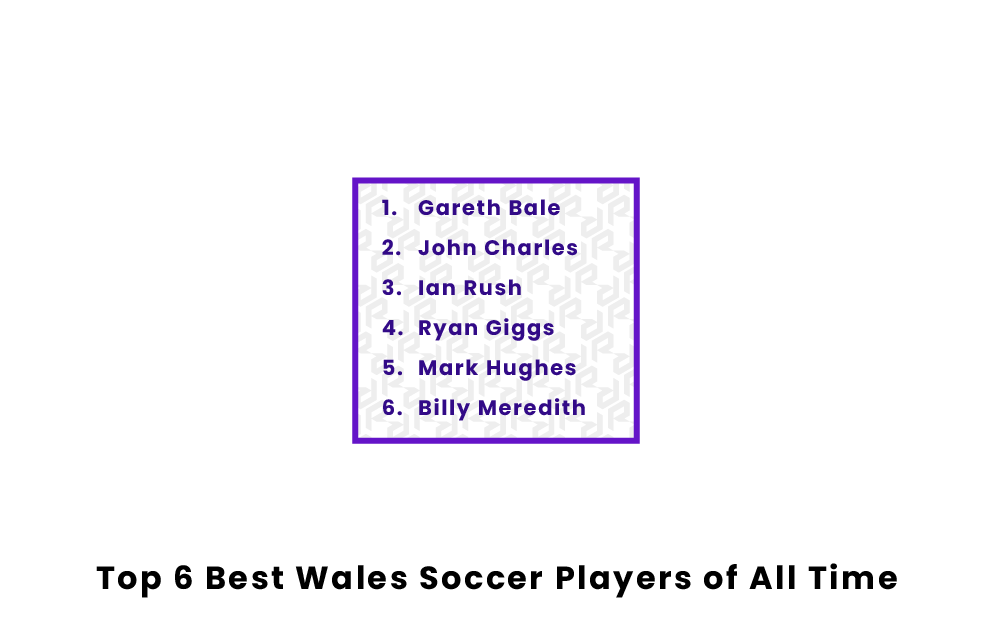 While Wales is a small country within Great Britain, it has produced an array of talented soccer players throughout its history. Many Welsh players begin their career playing for local Welsh clubs, moving on to larger teams in the English Premier League if they are talented enough. Here is the list of the top six best Welsh soccer players of all time.

Who Are The Best Welsh Soccer Players Ever?

Gareth Bale is regarded as the best Welsh soccer player of all time. Bale was born in 1989 in the city of Cardiff, Wales. The right winger is widely known for his speed and his shooting ability. Gareth Bale began his professional career playing for the English club Southampton. In 2007, Bale transferred to the English Premier League team Tottenham Hotspur F.C., where he transformed into a star player. Bale played for the club until he moved to the Spanish Giant Real Madrid in 2020 and later LAFC in 2022. Bale has won the Welsh Player of the Year award six times, as well as the UEFA Champions League a whopping five times.

The second-best Welsh soccer player of all time is John Charles. Born in the city of Swansea, Wales, in 1931, John Charles was a highly-skilled center forward who played for many top-tier clubs. Charles began his professional career playing for Leeds United in England in 1949. After a series of transfers between Leeds United and the Italian giant Juventus, Charles settled at Merthyr Town, a Welsh club, where he ended his career in 1974. John Charles was the top scorer in the Serie A in the 1957 season, scoring 28 goals. Additionally, he has won the Italian Championship with Juventus five times.

The third-best Welsh soccer player of all time is Ian Rush. Rush was born in the town of St. Asaph in Wales in 1961. He began his professional career in 1979, playing for Chester City. After finding success playing as a center forward, Ian Rush went on to play for legendary soccer teams such as Juventus, Liverpool Football Club, Leeds United, Newcastle Football Club, and even Sheffield United, one of the oldest professional soccer clubs in history. Among his achievements, Ian Rush helped Liverpool win the English Championship five times throughout his career with the club. Rush retired from soccer in 2000, playing for Sydney Rush in Australia.

The fifth-best Welsh soccer player of all time is Mark Hughes. The Welsh center forward was born in 1963 and played as a center forward throughout his career. Hughes began his professional career playing for Manchester United in 1983. After three years with the British club, he transferred to La Liga, where he played with Barcelona. After a series of loans between Barcelona and Bayern Munich, Hughes ended his career back in the English league with Blackburn rovers in 2002. Throughout his time in the English top flight, Hughes scored 64 goals. In both 1993 and 1994, he was named footballer of the year.

The sixth-best Welsh soccer player of all time is Billy Meredith. Meredith was born in the town of Chirk, Wales, in 1874, long before the rest of the top six Welsh players. Meredith played as an attacker prior to the establishment of the modern soccer positions today. He began his career playing for his hometown team Chirk AAA, eventually going on to play for Manchester City in 1894. In 1906 Meredith transferred to Manchester United, staying with the team until his return to Manchester City in 1921. The attacker retired after a long career in 1924. While Meredith’s career stats are not officially known since he played in professional soccer’s early years, he has gone on to become a Welsh soccer legend and a renowned Manchester City veteran.

Who is the best men’s soccer player from Wales?

The best men’s Welsh soccer player is Gareth Bale. The talented attacker was born in 1989 and is widely known for his speed and shooting ability. Gareth Bale began his professional career playing for Southampton. He went on to play with English giants Tottenham Hotspur F.C., rapidly scoring goals. Bale went on to play for Real Madrid in Spain and LAFC in the MLS. Throughout his career, Gareth Bale has won the UEFA Champions League a whopping five times.

Who is the best goalkeeper from Wales?

Who is the best women’s soccer player from Wales?

The best women’s soccer player from Wales is Jessica Fishlock. Fishlock was born in 1987 in the city of Cardiff. She began her professional career playing as a midfielder for Bristol City. Fishlock has played for clubs across the world, ranging from Glasgow City LFC, to FFC Frankfurt, and even to Melbourne Victory in Australia, though she is primarily known for her success at the French team OL Reign in Lyon. Currently, Fishlock coaches her previous team, Melbourne Victory, following her successful playing career.