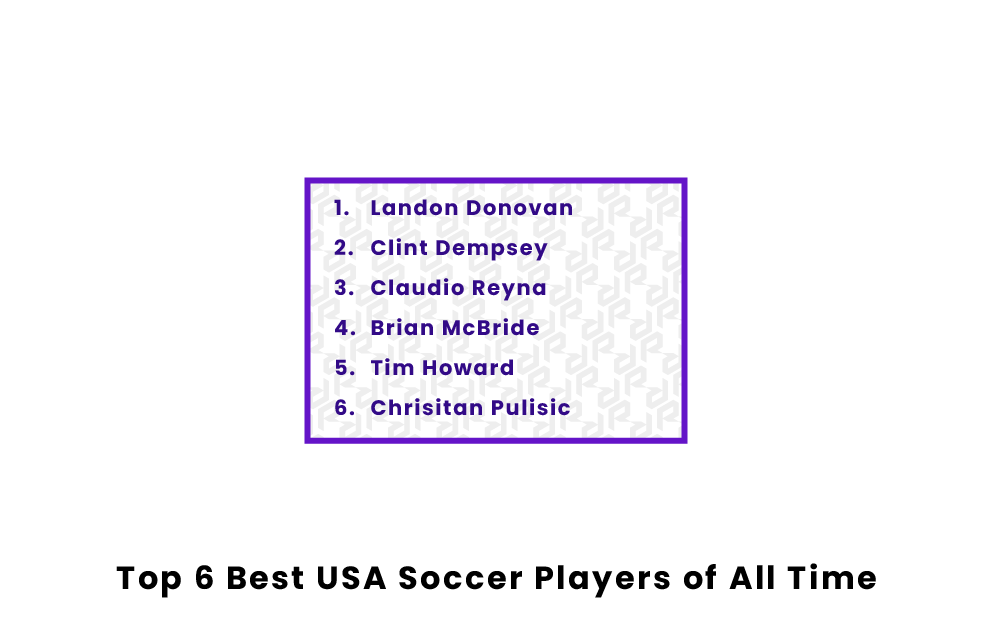 Globally, soccer is the most popular team sport and the World Cup is the biggest sporting event in the world. Teams like Brazil, Germany, and Italy have dominated the tournament for years, but what about the USA? Despite having no World Cups to its name, the American men’s national team is 26th in all-time total World Cup points and has had some great players to showcase throughout their history. The best of these players are listed below.

Who are the Best American Soccer Players Ever?

As the best USA soccer player of all time, Landon Donovan was the leader in both goals and games played during his time at the 2002, 2006 and 2010 World Cups. He is also the undisputed GOAT of the MLS. In the 2010 World Cup, Donovan scored a goal in the 92nd minute to win the game versus Algeria. This goal has gone down as one of the great moments in American sports history and created one of the most spine-chilling commentating calls of all time. For his career, Donovan has won multiple ESPYs and other awards that have cemented him as one of the greatest soccer players ever. In 2018, Donovan retired as a true American hero after a long and successful career.

Clint Dempsey’s grit and versatility alone make him one of the best soccer players the United States has ever seen. His ability to find success in multiple positions is very impressive. He has scored 47 goals for the United States national team and four in the World Cup. He was featured in 2006 and 2010 tournaments, but he is most known for his dominant and memorable performance in the 2014 World Cup. Across the pond, he was also the all-time leading goal scorer in Fulham history and spent a long time with the Tottenham Hotspurs. Despite spending a majority of his career in England, Dempsey is still considered an American legend.

Many older soccer fans will tell you that Reyna is the best United States player of all time for his power as an attacking midfielder. With only eight goals for the national team, he doesn’t show up in the scoring column, but his playmaking abilities set him aside from everyone else. He was a crucial member of three World Cup teams with a very memorable performance in 2002 where he was named an All-Star. He also spent a majority of his career in Scotland with the Rangers in addition to playing with Manchester City and the New York Red Bulls. He is currently the sporting director of Austin FC.

Brian McBride is remembered as one of the greatest American soccer players, especially thanks to his performance at the 2002 World Cup. USA was a big underdog thanks to a very poor 1998 performance, and they found themselves facing a stacked Portugal team. The team rallied though and won the game 3-0 with a remarkable winning goal effort from Mcbride. Across his entire career, he played 395 total games and scored 141 goals (including three in the World Cup).

Tim Howard is arguably the greatest goalkeeper the American national team has ever had. Over his 23-year career, he started for USA 121 times, was the tone setter for two World Cup teams, and set a record for most saves in a single World Cup game. He also played his first five seasons in New York in the MLS, making over 700 saves, and then spent 13 seasons in the Premier League with Manchester United and Everton. He then came back to America and finished his career with the Colorado Rapids.

As the youngest and only active player on this list Christian Pulisic has already won three U.S. Soccer Male Athlete of the Year awards, including one when he was 18 years old. That is only one less than all-time legend Landon Donavon. Pulisic first appeared on the American national team when he was 17 years old. He also currently plays as an attacker for Chelsea in the Premier League. He has the opportunity to make a statement in the upcoming 2022 World Cup in Qatar and improve his ranking amongst the best all-time American players.

Who is the best men’s American soccer player?

The best men’s American soccer player is, without a doubt, Landon Donavon. Playing from 1999 to 2019, he made 157 appearances for the U.S. Men’s National Team and scored 57 goals. He is also well-known for his time with the LA Galaxy where he played 11 seasons. For this, Donavon has been given the title of greatest MLS soccer player of all time. He now manages the San Diego Loyal.

Who is the best goalie from the United States?

The best goalie from the United States is Tim Howard. Howard appeared in two World Cups and played in 121 games  for the United States Men’s National Team. He has appeared in 688 total games throughout his career and has saved 832 shots. He has the world record for most saves in a World Cup game with 16 versus Belgium in 2014. He is also responsible for 207 shutouts in his 688 games.

Who is the best women’s American soccer player?