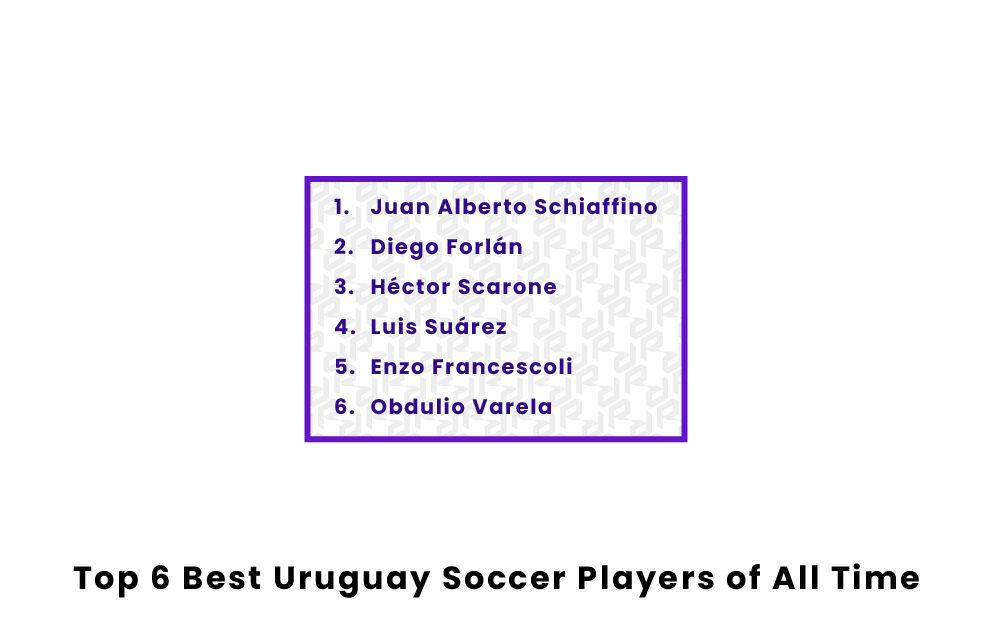 The World Cup titles in 1930 and 1950 have made Uruguay among the greatest national soccer teams in history. After decades of disappointment, “La Celeste” rose back to the top at the 2010 World Cup, coming in fourth, and followed that result with a win in the 2011 Copa América. Read on to learn about the best Uruguayan soccer players of all time!

Who are the best Uruguayan Soccer Players ever?

Known as one of the few players in international soccer to have played for two different national teams (Italy and Uruguay), Juan Alberto Schiaffino earned immortality by scoring the first goal in the 1950 FIFA World Cup final.

Before the 1950 World Cup, Uruguay was not considered one of the top teams. However, they reached the final after a surprising campaign. There, thanks to an all-time display from forward Juan Alberto Schiaffino, who scored the game's opening goal, Uruguay managed to pull off one of the biggest upsets of all time, beating host country Brazil.

Diego Forlán is the cover boy of Uruguay’s second golden generation that reached fourth place at the 2019 World Cup and won the Copa América in 2011.

The former Atletico de Madrid player led the Celeste in the 2010 World Cup, scoring five goals, which earned him the Golden Ball and the Golden Boot, the awards given to the best player and top scorer of the tournament. A year later, he delivered again for Uruguay, scoring a brace in the 3-0 final win against Paraguay. Diego was also part of the Uruguayan side that finished fourth at the 2013 FIFA Confederations Cup.

Having scored 31 goals in just 51 matches, Héctor Scarone was the key figure in the first golden generation of the Uruguayan national team that won the inaugural 1930 World Cup on home soil.

A skilled center forward with a killer instinct, Scarone led Uruguay to four Copa América wins from 1917 to 1926, making him one of the most decorated players in the national team’s history. The former Nacional player also took part in the 1924 and 1928 Olympics, bringing home the gold medal each time. His 31 goals are also the fourth-highest tally in Uruguay’s history.

Together with Diego Forlán and Edinson Cavani, Luis Suárez formed one of the deadliest attacking trios of the 21st century in international football. Luis Suárez arrived at the 2010 World Cup as a semi-unknown player from Ajax and became a national hero after a stellar tournament.

Suárez took part in three World Cup tournaments, with Uruguay scoring seven goals in 13 matches, including a brace against South Korea in 2010 to send his team to the quarterfinals. Suárez was also crucial in the 2011 Copa América win, scoring four goals and bringing the best player of the tournament back home. With 66 goals in less than 140 matches, Suárez is the all-time leading scorer in Uruguay’s history.

Despite a moderate World Cup success, as he never went past the round of 16 in both of his appearances in 1986 and 1990, Enzo Francescoli is one of the greatest players in the history of “La Celeste.” The current sporting director of River Plate was the leader of the Uruguayan national team that won three Copa América titles from 1983 to 1995.

Francescoli became Uruguay’s captain in 1989, leading his team in the 1990 World Cup and the 1995 Copa América. In his last Copa América, Francescoli scored two goals and a penalty in the shootout in the final against Brazil, giving his country their 16th international title.

Alongside Juan Alberto Schiaffino, Obdulio Varela was one of the heroes who pulled off the biggest World Cup upset of all time in 1950 against host country Brazil. Varela debuted for “La Celeste” in 1939 and later won the Copa América in 1942.

Before the 1950 World Cup, Varela was handed the captain's armband. Varela never lost a World Cup match as a captain, winning seven straight before getting injured in the 1954 World Cup, where Uruguay finished fourth. Varela played the 1950 World Cup final as a sweeper and was crucial in sending back every Brazilian attack in the match’s final minutes.

Who is the best men’s soccer player from Uruguay?

Juan Alberto Schiaffino, the hero of the 1950 World Cup, is considered the greatest soccer player from Uruguay. Schiaffino brought Uruguay back to glory with his goal in the 1950 World Cup final and then led his side to fourth place in the 1954 World Cup after a campaign where they beat Czechoslovakia, Scotland, and England.

Who is the best goalie from Uruguay?

Fernando Muslera is considered the greatest goalkeeper in Uruguay’s history. After making his debut in 2009, Muslera became Uruguay’s number one and has kept that spot ever since. Muslera led his team during the 2010, 2014, and 2018 World Cups and through five Copa América tournaments. In his first World Cup in 2010, Muslera turned into a hero by saving two penalties in the shootout against Ghana to send Uruguay to the semifinals.

Who is the best women’s soccer player from Uruguay?

Angélica Souza is the best women’s soccer player from Uruguay. The former River Plate Montevideo striker is the all-time leading scorer in the history of the Uruguayan women’s national team and among the most capped players.