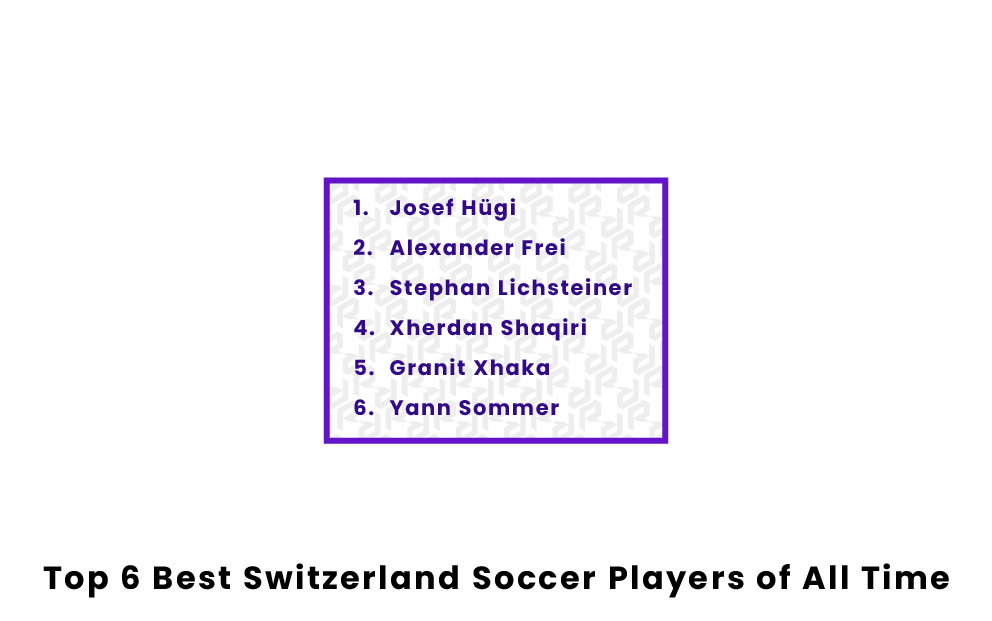 Switzerland is among several national teams that have become a stable underdog at the World Cup and the Euros since the late nineties. Starting in 2004, Switzerland has not missed a single major tournament berth and even pulled off some great upsets. Let’s now find out who the top Swiss players of all time are!

Who are the best Swiss Soccer Players ever?

Josef Hügi was the most iconic Swiss player of the 20th century. The Swiss national team did not have great success until 2006 but still managed to qualify for seven World Cup tournaments before then. Led by Hügi, Switzerland reached their best result at the 1954 World Cup when they were eliminated by Austria in the quarterfinals.

The FC Basel legend had a legendary run at the 1954 World Cup, scoring six goals, including a brace against Italy and a hattrick against Austria. These six goals earned him the Silver Ball, the award given to the second-highest goalscorer of the tournament.

Having scored 42 goals, which made him the top scorer in the Swiss national team, Alexander Frei was the biggest soccer icon in Switzerland in the early 2000s.

Frei made his debut for Switzerland in 2001 in a World Cup qualifier against Yugoslavia. In his second match against Luxembourg, the Basel native scored a hattrick, immediately setting the tone for a legendary international career. Alexander Frei took part in four major tournaments with Switzerland, two UEFA Euros and two World Cups, captaining the Swiss team at the 2010 FIFA World Cup in South Africa.

With 108 appearances, Stephan Licsteiner is the third-most capped Swiss international of all time. For many years, the former Juventus right back dominated his section of the field and provided great defensive stability thanks to his tirelessness.

Lichstainer participated in three World Cup tournaments and was handed the captain armband in 2015. As captain, Lichsteiner led Switzerland to a first-round appearance at the 2016 Euro and the 2018 World Cup, where they were able to finish second in a group that included Brazil and Serbia. Lichsteiner closed his international career in 2019 with 15 goal contributions.

Ever since he made his international debut in 2010, Xherdan Shaqiri has become the star of the Swiss national team. Thanks to his class and versatility, Shaqiri can play almost any position in the three up top or even as a central midfielder.

Shaqiri took part in three World Cup tournaments, 2010, 2014, and 2018, scoring four goals, including a hat trick against Honduras in 2014. The current Chicago Fire star also had a great impact at Euro 2016, where he scored a bicycle kick goal against Poland and a brace against Turkey at Euro 2020 to send Switzerland to the knockout phase.

Arsenal midfielder Granit Xhaka has become a pillar of the Swiss national team in just over ten years of his international career. Known for his warrior spirit, Xhaka is among the best two-way midfielders in the world, winning many tackles and scoring wonder goals thanks to his long-shot abilities.

Xhaka participated in the 2014 and 2018 World Cup, scoring in both tournaments. Thanks to his great leadership skills, he was nominated as the national team’s captain after Stephan Lichsteiner retired in 2019. As the team’s captain, Xhaka was one of the key players in Switzerland’s miraculous upset against France in the round of sixteen at Euro 2020.

Alongside Xhaka, Shaqiri, and Seferovic, Yann Sommer was one of the heroes that led Switzerland to the quarterfinals at Euro 2020. The Borussia Monchengladbach goalkeeper stole the show after saving Kylian Mbappé’s penalty in the round of sixteen shootout. Sommer also saved a penalty in the quarterfinals shootout, but it was not enough, as Switzerland could not pull off another miracle against Spain.

Sommer made his international debut for Switzerland in 2012 and became the starting goalkeeper after the 2014 World Cup. Since then, he has started every game at Euro 2016, the 2018 World Cup, and Euro 2020 and has accumulated a total of 30 clean sheets.

Who is the best men’s soccer player from Switzerland?

Josef Hügi is the best men’s soccer player from Switzerland. In eleven World Cup appearances, Switzerland has only made it to the quarterfinals once, when a hat trick by Josef Hügi was not enough to send the team to the semifinals. A stellar 1954 World Cup campaign, where he scored six goals in three games, makes Josef Hügi the greatest player in the history of the Swiss national team. His six goals in the tournament are also the highest number of goals scored by a Swiss player at any World Cup.

Who is the best goalie from Switzerland?

Yann Sommer, who became the starter following the 2014 World Cup, is not only Switzerland’s greatest goalkeeper, but is also one of the best players ever in the history of the Swiss national team. Sommer’s incredible saves have allowed Switzerland to clinch the ticket to the 2022 World Cup, winning a qualifier group stage against reigning European Champions Italy. The former FC Basel goalie was also the hero at the 2020 Euro saving the decisive penalty that sent his team to the quarterfinals.

Who is the best women’s soccer player from Switzerland?

Switzerland has had some great players, but no one tops the performance of Ana-Maria Crnogorčević, who has scored 67 goals in 135 matches with the national team. Switzerland is among the national teams that have started rising to the elite of European women’s soccer in the 21st century. The team reached the round of sixteen at the 2015 World Cup and made it to the group stage at both Euro 2017 and Euro 2022.