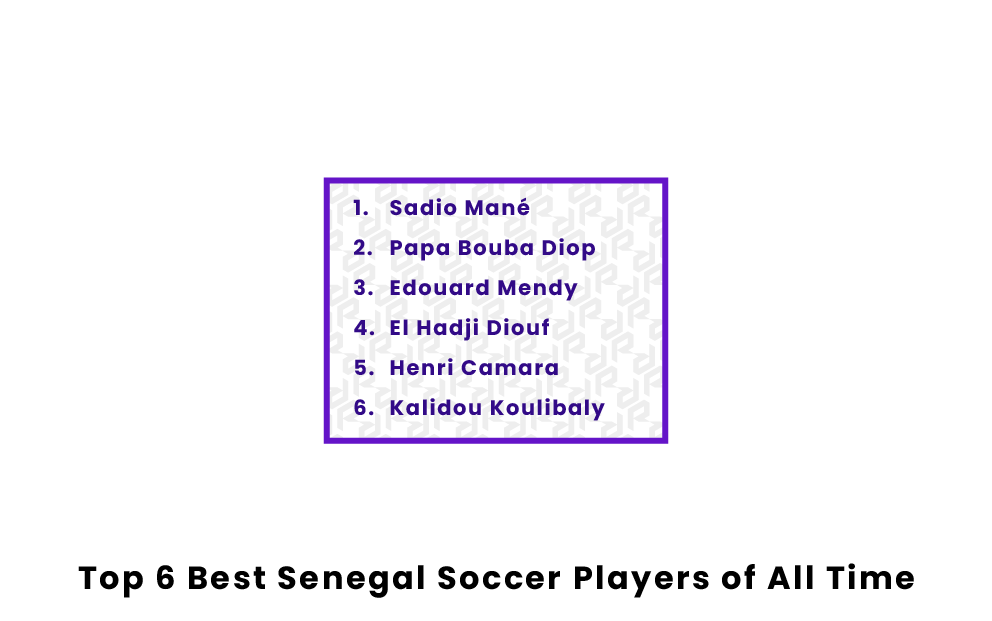 Soccer is one of the most popular sports around the world, and fans travel from far and wide to watch highly anticipated tournaments such as the FIFA World Cup. After gaining independence from France in 1960, Senegal established the Senegalese Football Federation and launched its own competitive soccer team. The Senegal men’s soccer team has been a top international competitor ever since. Here is a list of the top six best Senegal soccer players of all time below.

Who are the best Senegalese Soccer Players ever?

Sadio Mané is one of the most talented Senegalese soccer players of all time, although he almost didn’t play the sport. His father banned him from playing soccer, but he eventually pursued his dream. When he joined Liverpool FC, Mané even became the highest paid African soccer player of all time.

In his career so far, Mané has scored 100 Premier League goals, a feat that has only been accomplished by two other African soccer players previously. He is also the second Senegalese soccer player to win the African Footballer of the Year award, which he won in 2019. Although the COVID-19 pandemic dampened Mané’s strong performance on the pitch, he is still considered a top-performing soccer player.

Papa Bouba Diop is one of the most beloved Senegalese soccer players of all time. Diop, whose nickname was “the Wardrobe” due to his tall stature, helped the Senegal men’s soccer team break team records and compete in championship games. Diop scored the only goal against France, who were then reigning champions, in the 2002 World Cup. At the age of 41, Diop passed away in France in 2020. His teammates Henri Camara and El Hadji Diouf both remembered Diop as a model and outstanding player. Soon after his death, the president of Senegal erected a museum in honor of the soccer player. Despite his early death, Diop’s soccer legacy will be remembered for many years to come.

Edouard Mendy is a Senegalese goalkeeper with an incredible career. Mendy began playing in France, but he struggled to make ends meet and relied on unemployment support. Finally, he made a breakthrough when he signed with Stade de Reims in 2016. Thanks to his success on the pitch, Mendy was added to Chelsea FC’s roster in 2020, and he helped the team win the Champions League during the 2020-2021 season. The goalie also plays for the Senegalese national team during international competitions.

El Hadji Diouf is one of the best and most controversial soccer players in Senegal history. He is well known for playing two positions: striker and midfielder. Diouf first entered professional soccer at 17 when he played for the Sochaux club in France. The young player soon became the captain of the Senegal national team in 2006 and later retired in 2007. However, Diouf came out of retirement the next year and played in the 2008 African Cup of Nations (AFCON) with Senegal. Finally, in 2014, Diouf retired for a second and final time. Despite his controversial, impassioned behavior on and off the field, Diouf is one of the most beloved Senegalese players in professional soccer history.

Henri Camara had a rich career that spanned over two decades. He made his international debut when he played for Senegal in the 2000 Africa Cup of Nations. Camara had previously played for the Teranga Lions and is considered the most capped player (99 appearances) and highest goalscorer (31 goals) of all time in the Lions FC. Over the span of his career, Camara played for 18 soccer clubs in total, which included clubs in Scotland, England, France, Switzerland, and Greece. After 20 years of intense soccer play, he retired in 2018.

Kalidou Koulibaly is a highly sought-after Senegalese soccer player. Born in France to Senegalese parents, he began his career playing for SR Saint-Die. Koulibaly then joined Chelsea FC in summer 2022. He is currently known as one of the best center backs in the professional soccer world and has accumulated over 300 appearances (as of 2022). He is also a staunch supporter of social justice (especially after enduring racism while playing for a soccer team in Naples, Italy) and helps underprivileged children in Senegal. Thanks to his hard work both on and off the field, Koulibaly will go down in professional soccer history as one of the most beloved Senegalese soccer players of all time.

Who is the best men’s soccer player from Senegal?

The best men’s Senegal soccer player is Sadio Mané. Similarly to his teammates Sakho and Cissé, Mané began his soccer career when he joined the Generation Foot Youth Academy. While playing for RB Salzburg, Mané racked up a record of 20 goals and 11 assists during his first season. Following the 2018-2019 season, Mané was awarded the PFA Player of the Year and the Premier League Golden Boot award. He also played for Senegal in the African Cup of Nations in 2019.

Who is the best goalie from Senegal?

Edouard Mendy is considered the best Senegalese goalie of all time. He earned the 2022 FIFA’s Best Goalkeeper award and was the first African to win the award. Mendy played for Senegal and helped the team win the 2021 African Cup of Nations. He is a part of the Premier League Chelsea FC. Mendy has also racked up many notable wins over the years, including the UEFA Champions League finals game during the 2020-2021 season, the UEFA Super Cup during the 2021-2022 season, and the FIFA Club World Cup in 2021.

Who is the best women’s Senegal Soccer Player?

Asisat Oshoala is considered the best women’s Senegal soccer player. In early 2022, Oshoala won the African Player of the Year award along with Senegal men’s soccer player Sadio Mane. She has won the Women’s Player of the Year award five times in a row, which beat Nigerian Perpetua Nkwocha’s previous record. Oshoala also won the Pichichi Award for leading scorer in the Primera Division, becoming the first African woman to do so.