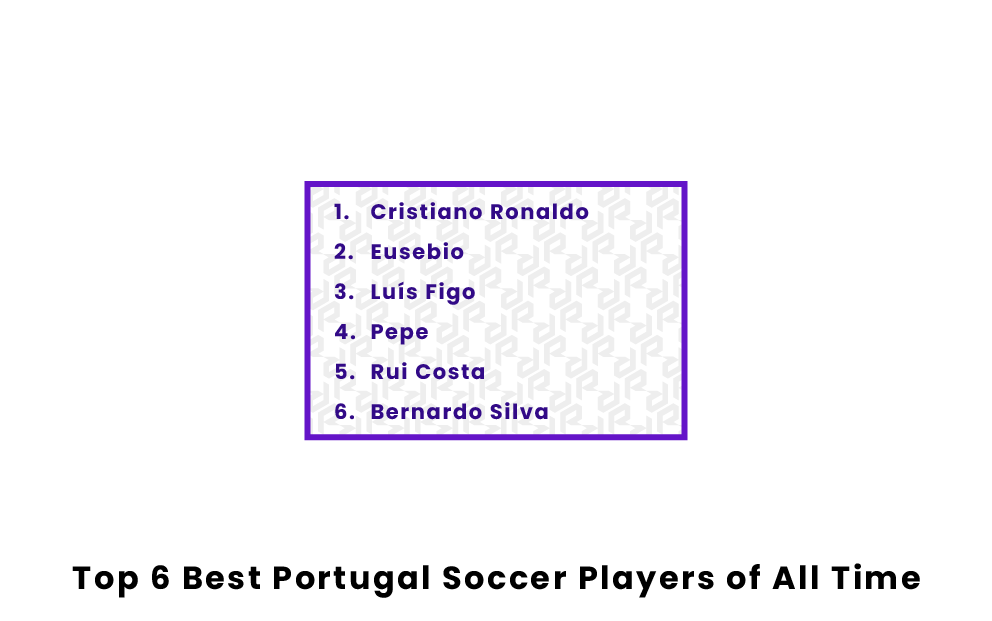 The Portuguese national football team has represented Portugal in international play for over 100 years, and is governed by the Portuguese Football Federation. When people think of Portuguese soccer players, they typically think of Cristiano Ronaldo. Ronaldo is one of the most famous soccer players of all time, but he’s not the only star to come from Portugal. On this list are the top six players of all time from Portugal.

Who are the Best Portuguese Soccer Players Ever?

Ronaldo has dominated everywhere that he has played. As a 16 year old, Ronaldo was signed to a large deal by Manchester United of the English Premier League. Ronaldo has also played with Real Madrid of the Spanish league La Liga and Juventus of the Italian Serie A league. After a few years playing for Juventus, Ronaldo returned to Manchester United and the English Premier League.

Eusébio da Silva Ferreira was a Portuguese soccer player who lived from 1942 to 2014. Ferreira was born in Maputo, which is the capital of Mozambique. Ferreira, who is sometimes referred to as just “Eusebio,” also went by the nicknames “Black Panther,” “Black Pearl,” and “o Rei.”,

Eusebio was a striker who used his speed and his deadly shot to score countless goals. He scored nine goals in the 1966 FIFA World Cup, making him the top goal scorer of the tournament. His country, Portugal, managed third place in that tournament.

Eusebio has appeared on many people’s lists of the top footballers of all time, including Pelé’s 2004 FIFA 100.

Luís Figo is another brilliant soccer player from Portugal who played in the late 1900s and early 2000s. He is best remembered as a creative winger who could elude almost any defender.

Figo made headlines in 2000 when he transferred from Barcelona to Real Madrid, as the two teams are serious rivals.

Kepler Laveran de Lima Ferreira, known as “Pepe,” is a professional footballer who plays for Futebol Clube do Porto, a team in the top Portuguese soccer league. Pepe has also played for  Marítimo, Real Madrid, and Beşiktaş.,

Pepe was actually born and raised in Brazil but opted to play for the Portuguese national team. He has 128 caps playing for Portugal, and has appeared in three FIFA World Cups and four UEFA Euro Championships.

Pepe is a center back and is known as a strong and hard-working defender. At times, he has also played as a defensive midfielder. He has aggressive tendencies, often resulting in picking up cards.

Rui Manuel César Costa is a former professional soccer player from Portugal. Currently, he is the 34th president of the S.L. Benfica sports club.

Costa played at the attacking midfielder position and was known for his playmaking and careful decision-making. He was nicknamed “The Maestro” and “Il Musagete.”

Costa represented his country in three UEFA European championships, as well as one FIFA World Cup.

Bernardo Mota Veiga de Carvalho e Silva, known more commonly as “Bernardo Silva” or just “Bernardo,” is the sixth-best soccer player from Portugal. Silva is one of the best midfielders in the world, most recently playing for Manchester City in the Premier League.

Silva’s best attributes include his stamina and his willingness to work. While he typically plays as an attacking midfielder, he is also often deployed at the forward or winger position. His athleticism allows him to be effective from many different areas of the field.

Bernardo was born in Lisbon, Portugal, in August of 1994. Silva does not have as much international experience as the other players on this list, as he is the youngest of the six. Still, he made Portugal’s 2018 FIFA World Cup team.

Who is the best men’s soccer player from Portugal?

Cristiano Ronaldo is by far the best men’s soccer player from Portugal. Ronaldo is one of the all-time greats, and while there are many elite footballers from Portugal, none touch Ronaldo’s legacy. Ronaldo boasts the most international goals, five Ballon d’Ors, and four Golden Shoes. Ronaldo also captains the Portuguese national team, thanks to his great leadership skills.

Who is the best goalie from Portugal?

Rui Patrício is the best goalkeeper from Portugal., Patrício, born in 1988, is the keeper for Portugal’s national team. He made his professional debut at just 18 years of age, after attending Sporting CP youth academy. Patrício has represented Portugal at two FIFA World Cups and four European Championships. In the 2016 Euro finals, Patrício and Portugal were crowned champions.

Who is the best women’s soccer player from Portugal?