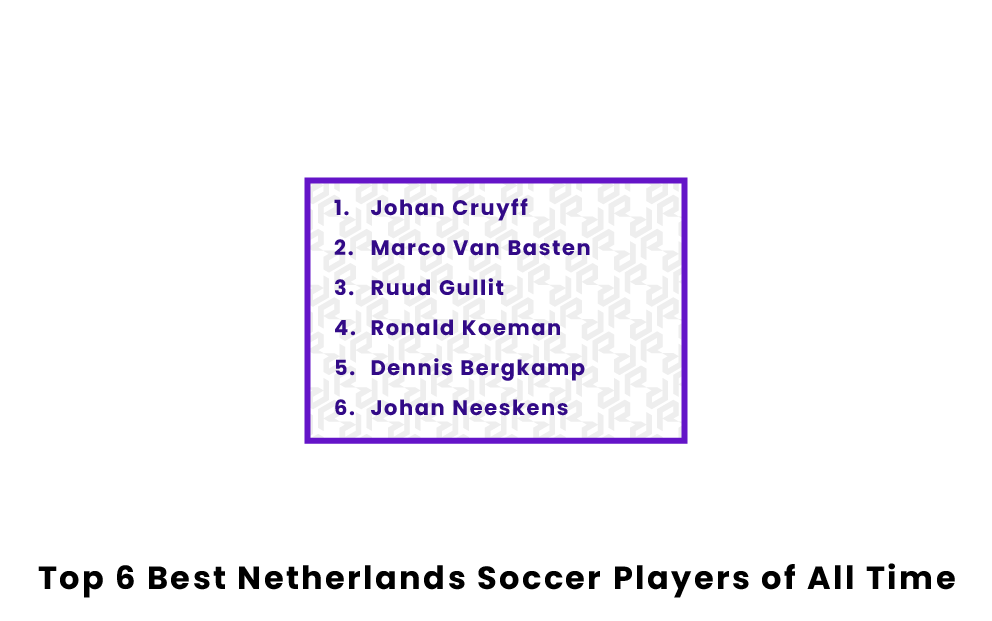 The Netherlands is known for producing some of the greatest soccer talents in the history of the sport. Apart from their iconic neon orange home international jerseys, the Netherlands is easily recognized by its wealth of talented attacking players. Here is the list of the top six greatest Dutch soccer players of all time.

Who are the Best Dutch Soccer Players Ever?

Not only is he the best Dutch soccer player of all time, but Johan Cruyff is also one of the greatest soccer players in history. Cruyff was born in the capital city of Amsterdam in 1947. He made his professional career debut for the Dutch giants Ajax in 1964, staying with the club until 1973, when he made his move to Barcelona. Throughout his career, Cruyff played for a number of clubs across Europe and the United States. In 1984, he ended his run with Feyenoord after 20 successful years in the sport. Notably, the attacking midfielder is credited with creating the “Cruyff turn,” an effective move that many players use when dribbling.

The third-best Dutch soccer player of all time is Ruud Gullit. Gullit was born in the city of Amsterdam in 1962. In 1979, he made his professional debut with the Dutch side Haarlem. Gullit played for multiple teams across the Netherlands until he transferred to AC Milan in Italy in 1987. He played for various Italian teams until he finished his career with England’s Chelsea F.C. in 1998. Ruud Gullit was a talented second striker, scoring a whopping 89 goals across 198 appearances in the Dutch league. In the Italian League, he scored 62 goals throughout 178 matches.

The fourth-best soccer player of all time from Holland is Ronald Koeman. Koeman was born in Zaandam, Netherlands, in 1963. He began his professional career at 17 years old, playing for FC Groningen in 1980. Just three years later, Koeman transferred to Ajax and later PSV Eindhoven in 1986. After a stint with FC Barcelona, the legendary sweeper ended his career back in the Dutch league in 1997, playing for Feyenoord. Koeman is renowned for his defending ability, denying shot opportunities and protecting the 18-yard box.

The fifth-best soccer player from the Netherlands is Dennis Bergkamp. Bergkamp was born in 1969 in Amsterdam. Throughout his career, he played as a second striker, becoming a leading goalscorer. Like many of the Dutch greats, he began his professional career playing for the Netherlands club Ajax in 1987. In 1993, he moved to Italy’s Serie A, where he was signed by Inter Milan, and later ended his career in 2006 in the English Premier League playing for Arsenal. Throughout his tenure in the Premier League, Bergkamp scored 87 goals. He went on to win the English Premier League with Arsenal three times.

The sixth-best Dutch soccer player is Johan Neeskens. Neeskens was born in the town of Heemstede in 1951. He started playing soccer professionally in 1970 with Ajax. Across his 21-year career, Neeskens played as a central midfielder for clubs such as Barcelona, New York Cosmos, and Zug 94. Across his 413 total professional club matches, Johan Neeskens scored 85 goals, an impressive feat for a playmaking midfielder. Additionally, across 49 international games playing for the Netherlands National Team, Neeskens scored 17 goals. Johan Neeskens is often regarded as one of the greatest central midfielders of all time.

Who is the best men’s soccer player from the Netherlands?

The best men’s Netherlands soccer player of all time is Johan Cruyff. Additionally, Cruyff is also regarded as one of the greatest soccer players in history. Many know Cruyff as he is credited with creating the “Cruyff turn,” a dribbling move that is often used to throw defenders off. Across his 20-year career playing professional soccer, Johan Cruyff was awarded the Ballon D’or award three times, a rare achievement that very few players have achieved.

Who is the best goalie from the Netherlands?

The best goalie from the Netherlands is Edwin van der Sar. Born in 1970, van der Sar began his goalkeeping career playing for Noordwijk in the Dutch league and was quickly bought by Ajax. Van der Sar went on to play for giant teams like Juventus, Fulham, and Manchester United before he retired in 2011. Across his 821-game career, Edwin van der Sar only conceded 718 goals, an impressive statistic for a goalkeeper.

Who is the best women’s soccer player from the Netherlands?

Arguably the best women’s Netherlands soccer player is Vivianne Miedema. The Dutch center forward was born in 1994. She initially began playing professionally for the Dutch team SC Heerenveen in 2011, but moved to German giants Bayern Munich in 2014. Since 2017, Miedema has starred on the Arsenal women’s team. Across her club soccer career, she has scored 246 goals in total as of 2022. In her time with the Netherlands Women’s Team, Miedema has scored 83 goals across 94 appearances.