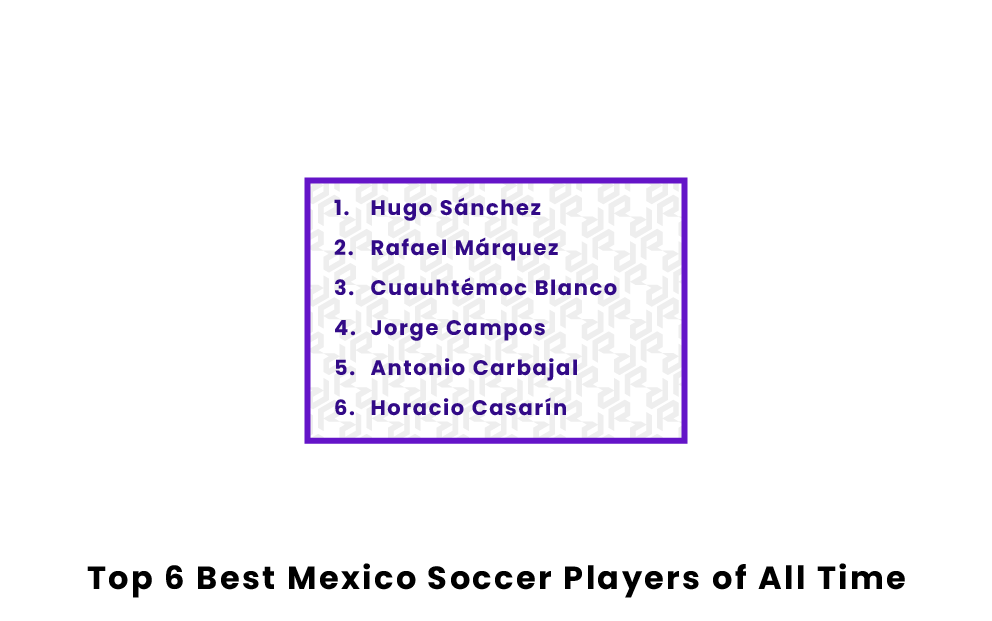 Throughout the history of soccer, Mexico has had a long tradition of producing some of the world’s best talent. Many of these players have played on the international stage, dominating the competition in Europe and beyond. They’ve also represented their home country in the beginnings of their careers and on soccer’s biggest stage: the FIFA World Cup. These six players are the best male soccer stars from Mexico.

Who are the Best Mexican Soccer Players Ever?

Based on his achievements as a member of some of Europe’s greatest soccer teams, Hugo Sánchez is Mexico’s greatest soccer player of all time. Sánchez was a forward whose professional career lasted over two decades, with some of the most spectacular play ever seen in the sport. Sánchez began his professional career with the UNAM club out of Mexico City, with whom he scored 97 goals. However, he is perhaps most famous for his time spent at both Atlético Madrid and Real Madrid, where he scored a combined 218 goals. He also helped Mexico win the gold medal in soccer in the 1975 Pan American Games. At the turn of the 21st century, he was voted the best soccer player of the 21st century from the North Central American and Caribbean region (CONCACAF).

Throughout his long professional career, Rafael Márquez was the definition of consistency. Márquez is almost undoubtedly the best defender to have ever come out of Mexico, and he made a name for himself playing for teams such as Barcelona FC, Monaco, and the New York Red Bulls. Márquez was a member of Barcelona between 2003 and 2010, and was absolutely instrumental in their success during those years. In 2004, they won the Champions League final against Arsenal, making Márquez the first Mexican player to win a Champions League final. Márquez played in five World Cups with Mexico, growing a legendary status in the country. In 2007, he was even nominated for the FIFA World Player of the Year.

With a legendary career that spanned more than two decades, Cuauhtémoc Blanco is a name that will go down in the history books of Mexican soccer. Blanco spent most of his career playing in Mexican soccer leagues and, throughout his career, amassed 181 goals. He also had some legendary performances playing forward and attacking midfielder for the Mexican national team, where he totaled 38 goals in 119 appearances. This led to him receiving the silver boot and silver ball awards for his performances in the 1999 FIFA Confederations Cup in the CONCACAF region. He was also awarded the Mexican player of the year award in 2002-2002.

Jorge Campos is likely the best goalkeeper in Mexican soccer history. Jorge Campos began his professional career in 1988 and finished in 2004. In those years, Campos built a legendary status as one of the best goalkeepers in the world. In Mexico’s premier soccer league, Liga MX, Campos won the Golden Glove five times. In 1993, he was awarded the Bronze Ball as he was voted the third-best goalkeeper in the entire world by the International Federation of Football History and Statistics (IFFHS). When he played in the United States’ biggest soccer league, the MLS, he was a three-time All-Star.

Another world-class goalkeeper to come out of Mexico, Antonio Carbajal was one of the best early talents from the country. Carbajal began his professional career with Club España out of Mexico City. He eventually transferred to León, which plays out of Guanajuato, and where he played from 1950 to 1966. The IFFHS ranked him as the 15th-best goalkeeper of the 20th century, thanks to his consistently excellent play. He also appeared in five World Cups for the Mexican National Team. As a member of León, Carbajal was twice able to take home a Copa de México championship with his team, the first in 1955 and the second in 1956.

Horacio Casarín had a legendary career with a variety of teams that spanned 21 years. His storied career began at a very young age; he was just seventeen when he made his professional debut with Necaxa. He found major success when he transferred to Atlante a few years later, where he scored 107 goals in six years. This success led him to transfer to Barcelona for a pair of seasons, though he moved back to Mexico afterward. As a member of the Mexican National Team, Casarín was able to score 15 goals in a mere 16 appearances.

Who is the best men’s soccer player from Mexico?

The best men’s soccer player of all time from Mexico is Hugo Sánchez. Throughout his professional career, he scored 397 goals. He was also quite successful on Mexico’s national team, where he helped the team to win the Pan American Games in 1975. Sánchez was also extremely productive as a member of some of the most successful European soccer teams, so he was an enormous source of pride back in Mexico. Not only is Sánchez the best Mexican soccer player, but he’s also one of the greatest soccer players in history, regardless of origin.

Who is the best goalkeeper from Mexico?

Jorge Campos is the best goalkeeper from Mexico. Campos is famous not only for his spectacular play as a goalkeeper, where he played aggressively and with incredible daring, but also because of his highly unique style. Campos is famous for some of the crazy kits he would wear to games. He often wore bright neon colors with patterns on both the shorts and the jersey. In a way, it complemented his wild play style.

Who is the best women’s soccer player from Mexico?

The best female soccer player from Mexico is Maribel Domínguez. Domínguez has played for a wide variety of teams, including Barcelona and four different professional teams in the United States. She’s found wide success playing forward. However, she’s probably most famous for her efforts as a member of the women’s national team, where she’s scored 82 goals across 116 career appearances. In 2005, she was even nominated for the FIFA Player of the Year award.