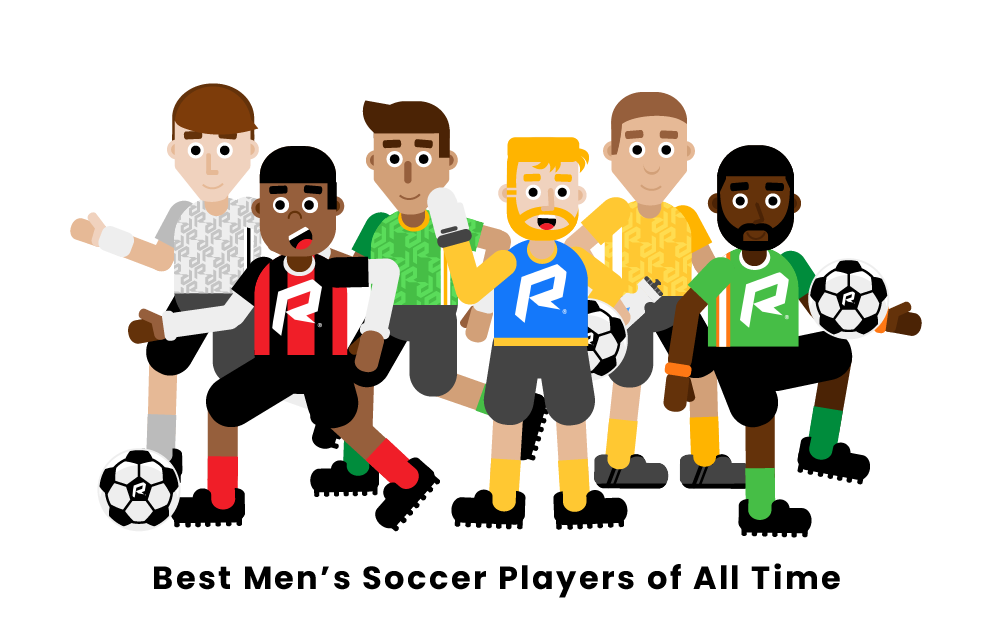 Soccer is one of the oldest and most widely practiced sports in the world, with over 3.5 billion fans and 250 million players spread across 200 participating countries. With such a large fanbase and number of teams, soccer players who stand out as the best of the best are often known around the world for generations, leaving an indelible mark upon the sport and its fans. Below, we discuss the top 6 best men's soccer players of all time.

Who are the best men's soccer players of all time?

Quite possibly the best-paid and most widely-known athlete in the world, Pelé (whose given name is Edson Arantes do Nascimento) is a former soccer player from Brazil and a three-time World Cup champion. Born on October 23, 1940, Pelé played for a minor league soccer club in his youth but was initially rejected by a major league club in the city of São Paulo. However, in 1956, at the age of 16, Pelé joined the Santos Football Club, winning nine league championships and winning the Libertadores Cup and the Intercontinental Club Cup in 1962 and 1963, respectively. Pelé became known as the "Pérola Negra" (Portuguese for "Black Pearl"), and soon was a national hero in his home country of Brazil. In 1958, Pelé helped his team win his first of three World Cups, and immediately afterward, Brazil declared him a national treasure to prevent other countries from recruiting him to their teams. Throughout his career, Pelé won two more World Cups, in 1962 and 1970. In 1969, during his 909th first-class soccer match, he scored his 1,000th professional goal. In his World Cup career, Pelé scored 12 goals in 14 games.

He briefly retired from soccer in 1974 but then joined the New York Cosmos of the North American Soccer League for three years to help promote the sport in America. In 1977, Pelé finally retired for good. The following year, he received the International Peace Award for his long career, as well as Athlete of the Century awards from the French magazine L'Equipe and the International Olympic Committee. Since his retirement, Pelé has published many autobiographies, starred in documentaries about his life, and has even composed music. In 1995, he was named Brazil's first-ever Minister of Sports, a title he held until 1998. He has also served as a UNESCO Goodwill Ambassador and a United Nations Ambassador for ecology and the environment.

One of the top soccer players of the 1980s, Diego Maradona, hailed from Argentina and was renowned for his skills on the soccer pitch, notably in controlling the ball and creating opportunities for goals. Over the course of his career, Maradona played for teams in Argentina, Italy, and Spain and was a World Cup champion for Argentina in 1986. Maradona began playing soccer very early in his life. Making his debut in first-division soccer at age 16, Maradona was the youngest Argentine ever to appear on a first-class team but was prevented from joining the World Cup team in 1978 because it was felt that he was still too young. In 1982, Maradona moved to Europe, briefly playing for FC Barcelona in Spain and SSC Napoli in Italy, winning championships for both teams. He returned to Spain soon afterward and then to Argentina, where he played his final soccer match for the Boca Juniors on October 25, 1997.

Across his career, Maradona appeared in four World Cups (1982, 1986, 1990, and 1994), the most famous of which was his 1986 appearance, where he scored two pivotal goals, including one later called the "Hand of God" goal, which Maradona scored with his hand, though the official mistakenly believed he had scored with his head. After ending his career, Maradona went on to coach the Argentine National Soccer Team, leading them to the quarterfinals of the 2010 World Cup.

One of the current soccer players on our list, Lionel Messi, hails from and plays for Argentina, as well as for Paris Saint-Germain in France. Born in Rosario, Argentina, in 1987, Messi was recruited by a youth club at age eight. By age 13, Messi was offered the ability to train with FC Barcelona's youth academy, an opportunity he eagerly accepted. Though Messi remains one of the shorter professional soccer players, his unique height and skill have garnered him comparisons to Diego Maradona, who was of a similar build and speed. Since his professional debut, Messi has played for FC Barcelona and the Argentine National Team. However, in 2021, he left to join Paris Saint-Germain in France. Throughout his ongoing career, Messi has set many records, among them becoming the first player to score five goals in a Champions League match, becoming Barcelona's all-time leading scorer, and accumulating the most goals in a calendar year, with 91 goals scored in 2012. Messi has not yet won a World Cup, but his ongoing career means that the accolade is still a lingering possibility.

Johan Cruyff (born Hendrik Johannes Cruijff) was a Dutch soccer player who won numerous honors throughout his career. After playing soccer in his youth, Cruyff joined Ajax, a youth club in Amsterdam, at the age of ten in 1957. He made his senior debut for the same club at 17. While playing for Ajax, Cruyff participated in winning six league titles, four national cups, and three European Champion Clubs' Cups (later renamed the Union of European Football Associations Champions League). His success led him to transfer over to FC Barcelona, where he was named captain and won even more championships in the 1970s.

Cruyff also played for the Dutch National Team, scoring 33 goals in 48 international matches. In the 1974 World Cup, the Dutch team, led by Cruyff, were nicknamed "Clockwork Orange" for both the novel of the same name and their orange jerseys. Though they failed to win, Cruyff excelled and was given the Ballon d'Or ("Golden Ball"), the World Cup's MVP Award, that year.

In 1979 and 1980, Cruyff joined a few American teams, including the Los Angeles Aztecs and the Washington Diplomats. He then returned to the Netherlands to play for Ajax, as well as the Dutch team Feyenoord, winning his ninth Dutch championship and fifth National Cup. After retiring, Cruyff coached various teams, including Ajax, FC Barcelona, and the Catalonia National Team.

One of the most well-known names in modern soccer, Portuguese star Cristiano Ronaldo has become a household name even among non-soccer fans in recent years. Ronaldo was raised around soccer, as his father was the equipment manager for a local club named Andorinha. Thus, Ronaldo began playing soccer from a young age. However, his aspirations were briefly impeded by the discovery of a heart condition at age 15, which required surgery to correct. Nevertheless, Ronaldo recovered quickly and fully, and was soon back on the field.

After playing for the Clube Desportivo Nacional of Madeira, Ronald transferred to the Sporting Clube de Portugal (also known as Sporting Lisbon), where he made his professional debut in 2002. In 2003, Ronaldo's excellent performance led him to sign with world-famous Manchester United, the star soccer team of Great Britain. His career skyrocketed instantly, and he quickly became known as one of the best forwards in the sport. During the 2007-08 season, Ronaldo scored an amazing 31 League and 11 Cup goals, while also winning the Golden Shoe award for being the leading scorer in Europe. The stunning season performance also led him to be named the FIFA World Player of the Year. Ronaldo soon left Manchester United to join Spain's Real Madrid, where his success continued.

In 2013, Ronaldo scored a total of 66 goals across his 56 appearances with both Real Madrid and the Portuguese National Team, an effort which earned him his second World Player of the Year Award. Ronaldo also became known off the field for his endorsements, ushering in a new era of soccer stars in advertising by becoming the third-ever athlete (after Michael Jordan and LeBron James) to land a "lifetime" contract with Nike. Ronaldo also established his own brand of products, "CR7," which includes shoes, underwear, and fragrances. In 2018, Ronaldo left Real Madrid to play for Juventus, and in 2021, he returned to Manchester United. He has not yet won a World Cup, but his ongoing career makes a future win a distinct possibility.

Italian soccer player Paolo Maldini was born in 1968 and is widely regarded as one of the greatest defenders in the game. After success in youth soccer, Maldini debuted for AC Milan in 1984 and remained on the team for his entire career, which lasted until 2009. As a player for AC Milan, Maldini won numerous championship trophies, including five UEFA League Championships, seven Serie A titles, one Coppa Italia, five Supercoppa Italiana titles, five European Super Cups, two Intercontinental Cups, and one FIFA Club World Cup. Maldini also played for the Italian National Team beginning in 1988, earning 7 goals in 126 international matches before ending his career with the National Team in 2002. During his time with the National Team, he was captain for eight years, gaining a record at the time for the most appearances as captain of the National Team, with 74 games played as captain. Maldini participated in four FIFA World Cups with the Italian Team, never winning but successfully reaching the semi-final of the 1990 World Cup and the final of the 1994 World Cup. Maldini retired from soccer in 2009, though he played in various special matches over the years and even played professional tennis for a time. In 2018, he became the Sporting Strategy and Development Director for AC Milan, and in 2019, he was promoted to Technical Director.

Who is the greatest men's soccer player of all time?

Many men's soccer players have been named the greatest of all time over the years, including famous names such as Diego Maradona, Lionel Messi, Johan Cruyff, and Cristiano Rinaldo. However, many people consider the greatest men's soccer player of all time to be Pelé, the Brazilian star athlete who won three World Cups and scored over 1,000 goals in his career. Pelé has undoubtedly changed the soccer world, and many of the records he accumulated still hold to this day, making him a strong contender for the greatest male soccer star of all time.

Who is the men's soccer player with the most goals scored?

Depending upon statistics, the men's soccer player with the most goals scored is either Pelé or Cristiano Ronaldo. Pelé holds the absolute record for the most goals scored in a specified period, with a Guinness World Record approved count of 1,283 goals throughout his lifetime. However, in his professional soccer career, Pelé accumulated a total of 775 goals in 840 matches, while Cristiano Ronaldo has scored 816 goals in 1,124 matches. This means that Ronaldo has scored more goals in his professional career than Pelé.

Who is the men's soccer player with the most Champions League titles?