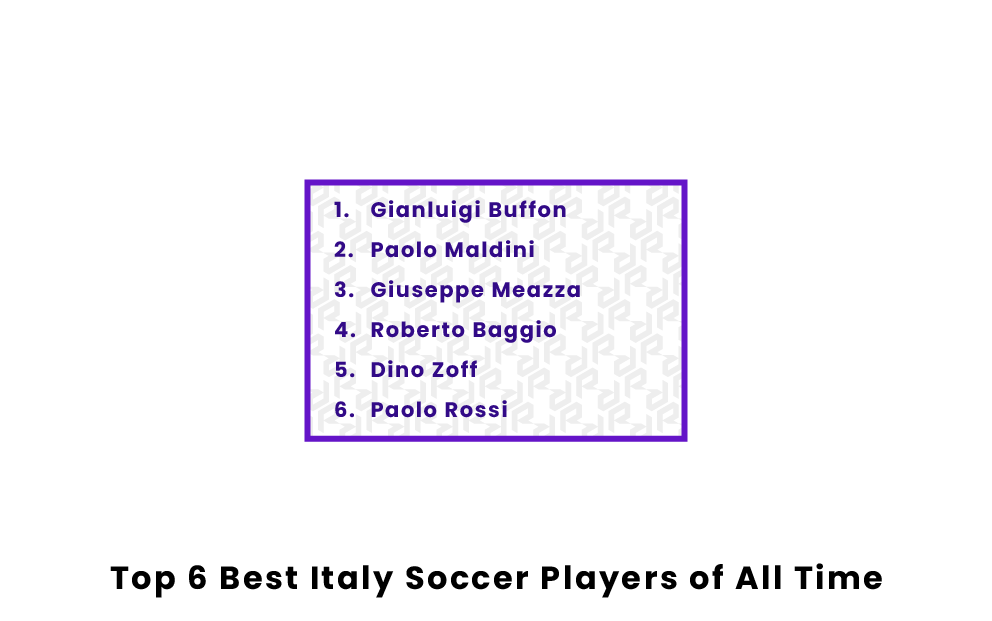 Who are the best Italian Soccer Players ever?

Thanks to his miraculous saves and unprecedented longevity, Gianluigi Buffon contributed to making the Italian national defense one of the toughest to face over the years. With 176 caps, Buffon is the all-time leader in appearances in the history of the “Azzurri” and was a key player in Italy’s win at the 2006 FIFA World Cup.

Buffon was among the best players at the 2006 FIFA World Cup, allowing only two goals in the whole tournament and making some crucial saves in the final. This earned him his first Ballon d’Or top-five finish, which was followed by another one in 2017 as a sign of how he was able to keep his elite status over the decades.

Considered by many the greatest defender of all time, Paolo Maldini is among the winningest players in soccer history, despite never winning a trophy with the national team. Maldini was a pillar of the golden “Azzurri” generation that finished third in 1990, second in 1994, and reached the quarterfinals in 1998.

Having captained the national team in most games from 1990 to 2002, Paolo Maldini is the Italian international with the most minutes played at the World Cup. The former AC Milan player has 23 appearances over four editions of the tournament and was never subbed off.

The legendary striker Giuseppe Meazza is among the only three players to have won multiple World Cup titles with Italy, as he was the star in 1934 and 1938. His transcendental impact on Italian soccer has earned him eternal memory, as the stadium shared by Inter Milan and AC Milan was named after him in 1980.

With 33 goals in 53 games, Giuseppe Meazza is the second-highest goalscorer in the history of the Italian national team. Meazza also has three World Cup goals under his name, including the second goal of the game in the win against Brazil in the 1938 World Cup semifinal.

1993 Ballon d’Or winner Roberto Baggio is among the classiest players to ever wear the Azzurri jersey. “Il divin codino (The divine ponytail),” as he was called due to his hairstyle, was the biggest superstar in Italian soccer in the nineties.

With nine goals over three World Cup tournaments, Baggio is the joint-highest World Cup goal scorer for Italy and is the player that scored in most editions of the tournament (three) for the Italians. Despite a penalty miss in the shootout in the 1994 World Cup final, Baggio will always be remembered as one of the best number ten in Italy’s history.

The Italian national team is known for its great tradition of goalkeepers, with Gianluigi Buffon and Dino Zoff holding many international soccer records. The former Juventus captain, Dino Zoff, led Italy to great success in his 15-year career with the Azzurri, becoming the only player in the country’s history to win both the UEFA Euros and the FIFA World Cup.

Similarly to Buffon, Zoff was able to stay at the top of the game for multiple decades and is still the oldest player to have ever suited up for Italy, being over 41 years old in the last international match of his career.

A hero at the 1982 FIFA World Cup, Paolo Rossi was one of the deadliest strikers for Italy in the eighties. After a rough start during the group stages in 1982, Paolo Rossi led Italy to an underdog win in the tournament thanks to a hattrick against Brazil, a brace against Poland in the semifinals, and a goal against West Germany in the final.

Rossi holds many records for Italy, as he is the joint overall top scorer for Italy at the World Cup and is tied with Schillaci as the player who scored the most goals in a single tournament. His heroics earned him the Ballon d’Or in 1982 after winning the World Cup title.

Who is the best men’s soccer player from Italy?

Over almost a century of history, Italy has had five Ballon d’Or winners and some of the best players to wear the Azzurri jersey. Among them, Gianluigi Buffon is acknowledged as the best ever in Italy's history. Considered the greatest goalkeeper of all time, Buffon is the Italian player with the most caps for the national team and played a crucial role in the Azzurri’s journey to the fourth World Cup title in 2006.

Who is the best goalie from Italy?

The Italian national team has always had a great tradition of goalkeepers with players like Giorgio Ghezzi, Dino Zoff, Walter Zenga, Gianluigi Buffon, and Gianluigi Donnarumma. Buffon is considered the best Italian goalkeeper, thanks to his legendary contributions in the 2006 tournament and his longevity that allowed him to stay at the highest level for over two decades. He became the Italian international with the highest number of appearances, with 176.

Who is the best women’s soccer player from Italy?

Elisabetta Vignotto is the best women’s soccer player from Italy. The current Sassuolo Women’s Team president collected 97 goals in 95 appearances over 19 years with the Italian national team and is among the top three players in all-time appearances.