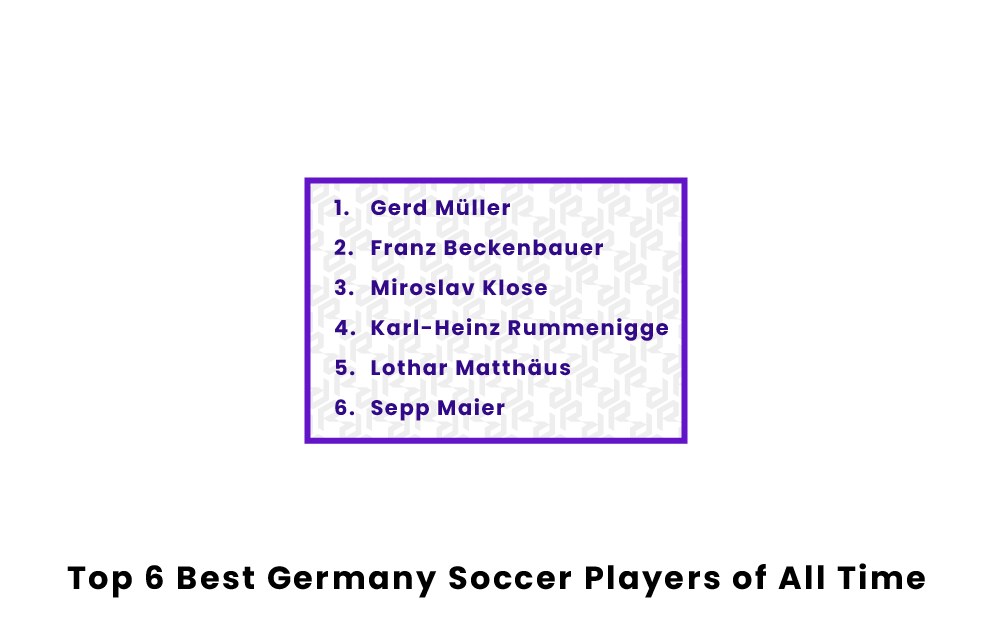 Who Are the Best German Soccer Players Ever?

One of the greatest soccer players of all time, Gerd Müller stands out amongst all other German soccer players. Müller spent the majority of his club career playing for Bayern Munich (1964-1979) while also spending time with Nordlingen (1963-1964), the FL Strikers (1979-1981), and the Smith Brothers (1981-1982). Between those four clubs, Müller scored an outstanding 608 career goals. This ranks him in the top ten all-time of all players. For Germany, Müller scored 68 goals in just 62 matches, ranking second all-time for Germany behind Miroslav Klose. As for team success, Müller led Bayern Munich to four Bundesliga titles and helped Germany to the 1974 World Cup title.

A longtime teammate of Gerd Müller for both Bayern Munich and Germany, Franz Beckenbauer is considered one of the greatest defenders of all time. He was with Bayern Munich from 1964-1977 before spending time with the New York Cosmos (1977-1980, 1982-1983) and Hamburger SV (1980-1982) at the end of his career. He is credited with revolutionizing the modern-day sweeper position and anchored Germany’s defense for years. Despite primarily playing defense, he did manage to score 74 goals at the club level and 14 for Germany throughout his career. Alongside Müller, he helped Bayern Munich to four Bundesliga titles and Germany to the 1974 World Cup triumph.

The man who holds both the career scoring record for Germany and the career World Cup scoring record for any player is Miroslav Klose. Klose’s 71 career goals for Germany and his 16 goals at the World Cup both represent all-time marks. Additionally, he managed 258 career club goals while primarily playing for 1. FC K’lautern (2000-2004), Werder Bremen (2004-2007), Bayern Munich (2007-2011), and Lazio (2011-2016). His most outstanding team accomplishment was leading Germany to the 2014 World Cup title. Incredibly, he managed to win first, second, and third place at the World Cup during his career. Just as amazingly, Germany never lost a match in which he scored.

Another prolific goal scorer, Karl-Heinz Rummenigge takes the next spot on this list. Like many of the great German players over the years, Rummenigge played the majority of his club career with Bayern Munich from 1974-1984. He would go on to play for Inter Milan (1984-1987) and Servette FC (1987-1990) before retiring. In all, he scored 294 career goals between those three clubs, and he won two Ballon d’Or Awards for being the best player in the world in 1980 and 1981. With Germany, he scored 45 career goals, including 9 in World Cup play. He led Germany to runner-up finishes at the 1982 and 1986 World Cups, as well as victory at the 1980 European championship.

Lothar Matthäus was a defensive midfielder who also had a knack for putting the ball in the back of the net. At the club level, he spent time with six clubs over 21 professional seasons, netting 202 goals in 782 matches during that time. He helped his teams win eight league titles in all, seven in the Bundesliga and one in Serie A. With Germany, he scored 23 goals in a team-record 150 career appearances. He also holds the record for most World Cup matches played all-time with 25. His most impactful moment with Germany was leading them to the World Cup title in 1990, defeating all-time great Diego Maradona and Argentina in the final.

One of the greatest goalkeepers of all time, Sepp Maier takes the final spot on this list. He was the goalkeeper for Germany in 1974 when he led them to the World Cup title alongside Gerd Müller and Franz Beckenbauer. During that tournament run, Maier kept four clean sheets in seven matches played. In all, throughout his German career, he kept 43 clean sheets in 95 matches. At the club level, he spent the entirety of his career with Bayern Munich from 1962-1980. During those nineteen seasons, he kept 219 clean sheets in 705 matches and helped Bayern Munich to four Bundesliga titles.

Who is the best men’s soccer player from Germany?

While there have certainly been plenty of talented players over the years, Gerd Müller stands out amongst the rest as the greatest German soccer player of all time. He is in the top ten in goals scored all-time at the club level with 608, and he ranks second to Miroslav Klose in career goals scored for Germany despite playing far fewer matches than Klose. He was a key factor in Germany winning the World Cup in 1974.

Who is the best goalie from Germany?

Germany has had several great goalkeepers over the years, but the first and arguably greatest of them all is Sepp Maier. Maier was the goalkeeper when Germany won the World Cup in 1974, and he kept four clean sheets in seven matches during that tournament. In all, he kept 43 clean sheets in 75 matches for Germany during his career, as well as 219 in 705 matches during his nineteen-year career with Bayern Munich.

Who is the best women’s soccer player from Germany?

Bridgit Prinz is the best women’s soccer player from Germany, tallying 128 career goals for Germany in 214 career appearances. She also managed 282 career goals at the club level while playing for FSV Frankfurt, FFC Frankfurt, and the Carolina Courage. Prinz won three FIFA World Player of the Year Awards in a row from 2002-2004.