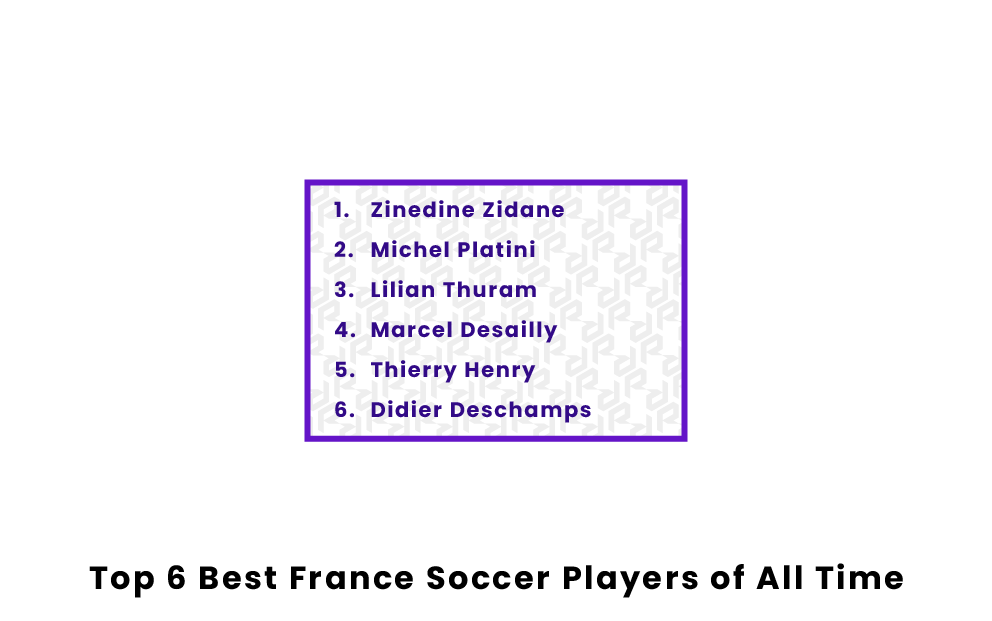 The French soccer team is a perennial world power, having won the World Cup in 1998 and 2018. France has also qualified for the ultimate tournament every time since 1998. There have been plenty of phenomenal players that wore the French uniform. Read below to learn about the six greatest French players ever.

Who Are the Best French Soccer Players Ever?

There’s little debate about the greatest French soccer player of all time. Zinedine Zidane is one of eight players to win the World Cup, the Champions League title, and the Ballon d’Or award. The midfielder helped his country win the World Cup in 1998 with two goals in the final against Brazil. As great as Zidane was, he’s more known now for an infamous incident during the 2006 World Cup Final between France and Italy. In extra time, the captain headbutted Italian defender Marco Materazzi and was ejected from the contest. The Italians ended up capturing the World Cup in penalty kicks shortly after.

One of the greatest soccer players during the 1980s, Michel Platini won three consecutive Ballon d’Ors, making him the first to achieve such a feat. “Le Roi” was a part of the 1978, 1982, and 1986 France World Cup squads, leading the latter two teams into the semi-finals. The midfielder also played a massive role in France’s 1984 Euro final victory over Spain, scoring the opening goal in the 57th minute of the match. Overall, Platini scored 41 times for his country in 72 appearances, currently fourth in French soccer team history.

Arguably one of the greatest defenders in the history of the game, Lilian Thurman helped stabilize the back end of France for 14 years. Zidane got most of the glory for his scoring prowess, but Thurman was the unsung hero of the 1998 World Cup Championship squad and the 2000 Euro Championship team. In 1998, the defender stepped up when it mattered the most, scoring the only two goals of his international career in the World Cup semifinals against Croatia. Thurman first equalized the game in the 47th minute; then he delivered what proved to be the winner in the 70th.

Marcel Desailly is another defender of that 1998 French World Cup championship team. Desailly was primarily a central defender, and he was one of the best to ever do it. Desailly was a leader and had an uncanny ability to see the field. Overall, the central man played 20 seasons. He was on both the 1998 French World Cup Championship team and the 2000 Euro title squad. Desailly also appeared on the 2002 World Cup team and was captain for all three contests. Unfortunately for him and his squad, the French did not advance past the group stage that year.

Thierry Henry is France’s all-time leading international goal scorer, with 51 goals in 123 career caps for the French national team. Six of those goals came in his 17 total appearances in the World Cup. His most impressive performance came in his first World Cup appearance, as he scored three goals during the team’s title run. In club play, Henry recorded a record four Premier League Golden Boots and played an integral role in Arsenal’s invincible team from 2003-04.

Didier Deschamps isn’t just one of the greatest French players ever; he’s one of the best managers ever. Deschamps was the captain of the 1998 World Cup Championship team and the manager of the 2018 title squad. Speaking of leadership, the midfielder became the youngest captain ever in 1993 to win the Champions League. Overall, Deschamps was a great player, but he’s more known for being a leader, as his stats don’t necessarily represent just how great he was.

Who is the best men’s soccer player from France?

The greatest men’s soccer player from France of all time is Zinedine Zidane. Zidane was the heart and soul of the 1998 France World Cup Championship team. Overall, the midfielder scored 31 goals for the French and appeared in three World Cups for his country (1998, 2002, and 2006).

Who is the best goalie from France?

There have been plenty of great French goalkeepers, but arguably the greatest one is Hugo Lloris. He was the main man in the cage for the 2018 World Cup Championship team. He allowed just three goals throughout the entire knockout round, including shut-outs in the quarterfinals and semifinals.

Who is the best women’s soccer player from France?