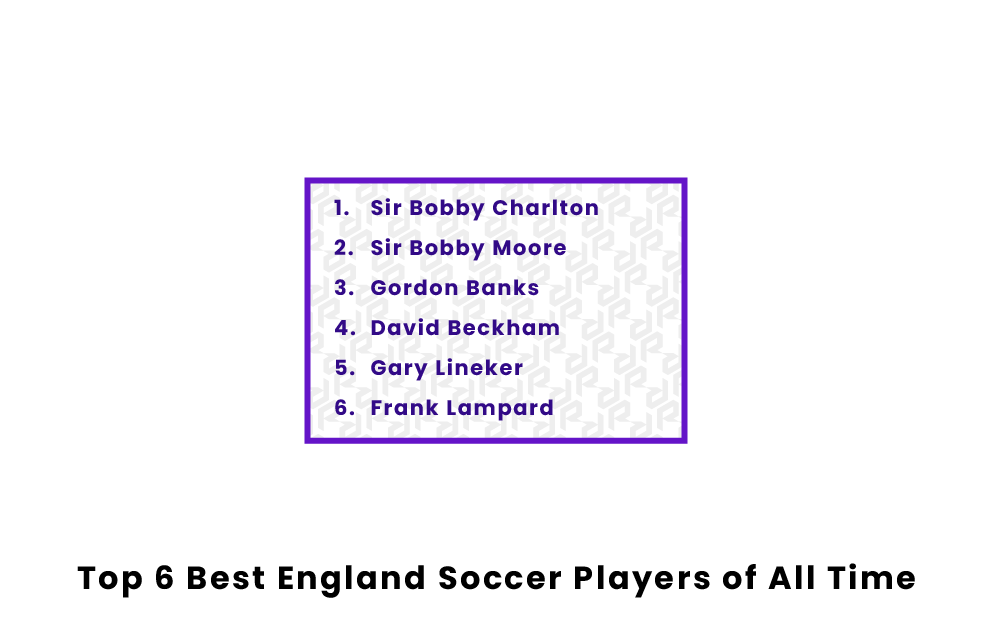 As the birthplace of the sport, soccer in England has a long history. England is the home of the first official soccer league, The Football Association, which was established in 1863. Throughout the centuries, England has seen many strong teams composed of talented players. Below are the six best soccer players in the history of English men’s soccer.

Who Are The Best English Soccer Players Ever?

Born in 1937, Sir Bobby Charlton is an absolute soccer legend. At age 15, he joined the Manchester United Youth Team, and that was the start of a lengthy and highly-decorated career with Manchester United. Charlton primarily played midfield or as a forward. During his first season, Charlton scored a perfect hat trick (when a player scores three goals, one with each foot and one with their head) and became a team starter. After that, it wasn’t long before Charlton led England to its first (and only) World Cup Win in 1966. After his retirement in 1973, he took on a managerial role for Present North End for two years before becoming a director for Manchester United in 1984. He was knighted in 1994.

While Sir Bobby Charlton got a lot of attention for scoring goals for England during their World Cup run, his teammate Sir Bobby Moore was the unquestioned leader of the team. Moore is regarded as one of the greatest defenders of all time, and his leadership from the back led him to be named captain of the English squad for 90 matches throughout his career, including during the 1966 World Cup, which England won. As for his club career, he played the majority of his career with West Ham United, making more than 500 appearances with them and leading them to victories in both the 1964 FA Cup and the 1965 European Cup.

The third-straight member of the 1966 World Cup champion team is goalkeeper Gordon Banks. Along with Sir Bobby Moore, Banks helped lead the English team from the back. In his career with England, he had 35 clean sheets in 73 matches. As for his club career, he primarily played for three teams: Chesterfield, Leicester City, and Stoke City. He led Leicester City to the League Cup trophy in 1964, and eight years later, he helped Stoke City to the same title. He made 26 appearances with Chesterfield, over 350 appearances with Leicester City, and over 200 with Stoke City.

One of the most famous footballers of the modern era, David Beckham comes in at number four on this list. While Beckham did not have quite the success on the international level as the three previous players on this list, he did manage 17 goals and 42 assists in his 115 appearances for England. At the club level, Beckham had a lot more team success. While with Manchester United, he helped the team win six Premier League titles (1996, 1997, 1999-2001, and 2003) as well as the 1999 Champions League title. Additionally, he won the 2007 La Liga title with Real Madrid, the 2011 MLS Cup with the LA Galaxy, and the 2013 Ligue 1 title with Paris Saint-Germain. Overall, he had 111 goals and 178 assists for his club teams in all competitions.

One of, if not the most prolific goal scorers in English history, Gary Lineker takes the penultimate spot on this list. He has the most goals scored in English World Cup history with 10, and he won the 1986 Golden Boot Award at the World Cup for scoring the most goals (six) of anyone at the tournament. Overall, for England, he scored 48 goals in 80 career appearances. At the club level, he mainly played for Leicester City (1976-1985), Barcelona (1986-1989), and Tottenham Hotspur (1989-1992), along with one season at Everton in 1985 and two with the Nagoya Grampus to finish his career from 1992-1994. Overall, between all those teams, he scored 187 goals in 355 career appearances.

While the 10 players below did not quite make the cut for the top six, they still deserve some recognition as honorable mentions:

Who is the best English men’s soccer player?

While there have certainly been plenty of talented soccer players in English history, Sir Bobby Charlton stands out amongst the rest. Charlton helped lead England to the 1966 World Cup title, the only such title in English history. Additionally, he won the 1966 Footballer of the Year Award and scored 49 career goals in 106 appearances for England. His success on the pitch led to him being knighted by Queen Elizabeth II in 1994.

Who is the best goalie from England?

England’s goalkeeper during the 1966 World Cup, Gordon Banks, deserves the title of greatest goalkeeper in English history. Along with helping to lead England to the aforementioned World Cup, he kept a clean sheet in nearly half of his career matches for England, doing so 35 times out of 73 matches. At the club level, he led Leicester City to the 1964 League title and did the same for Stoke City eight years later in 1972.

Who is the best English women’s soccer player?

Like the men, there have been many talented female English soccer players over the years, but the best of them all is arguably Kelly Smith. In 117 career appearances for England, she scored 46 goals. At the club level, she managed to win every major trophy several times over and is certainly one of the greatest female footballers ever, regardless of nationality.