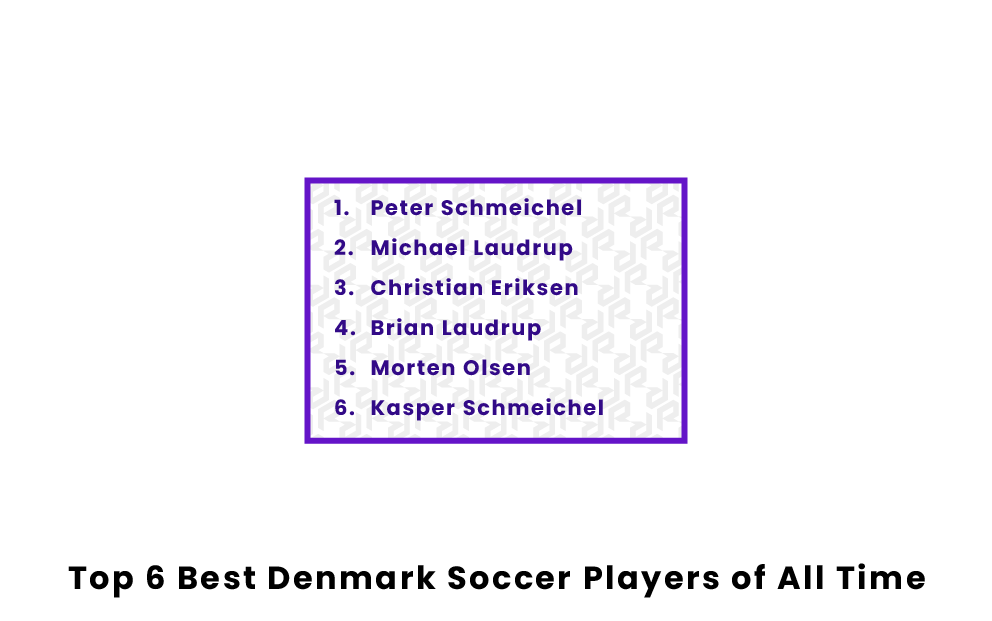 After a history of few World Cup and Euros appearances, the Denmark national team has conquered the hearts of fans around the world in the last three decades, making some unlikely runs, including a win in the 1992 Euros. Let’s now take a look at the six best Danish soccer players of all time!

Who are the Best Danish Soccer Players Ever?

Considered one of the greatest goalkeepers of all time, Peter Schmeichel was the leader of a Denmark side that shocked the world by winning the 1992 UEFA Euros and the Confederations Cup in 1995.

Schmeichel allowed only three goals in the 1992 Euro campaign as Denmark became the biggest underdog to be crowned European Champions. The former Manchester United goalkeeper holds the record for both appearances and best goals allowed ratio with 51 clean sheets in 121 matches. Peter Schmeichel also scored a penalty goal in a 2-2 friendly against Belgium in 2000, making him one of the few goalies to have scored with their national team.

As one of the very few players to have suited up for both FC Barcelona and Real Madrid, Michael Laudrup dominated the scene in Europe thanks to his silky touch and great goal-scoring ability.

Despite not making the 1992 Euro squad due to differences with the head coach, Laudrup captained Denmark in the 1995 Confederations Cup win and led his country to a quarterfinal appearance in the 1998 FIFA World Cup. His performances in the 1998 tournament in France earned him a spot on the All-Star team as he was crucial to the Danish win against Nigeria in the first round providing two assists.

Since his senior national team debut back in 2010, Christian Eriksen has become the biggest star on the Danish side. His classy touch and unmatched game vision make him one of the best number ten of his generation.

Over the years, Eriksen has become a complete midfielder that can score in any way, especially from set pieces, and that can offer good defensive support. His great plays have contributed to creating a new golden Danish generation that reached the quarterfinals in the 2018 FIFA World Cup in Russia, the semifinals at Euro 2020, and qualification for the 2022 FIFA World Cup.

Brian Laudrup, together with his brother Michael, was one of the key players in Denmark’s great success in the 1990s. Unlike his brother, Brian took part in the 1992 Euro campaign and provided two crucial assists in the semifinal to help Denmark reach the final.

The former Rangers player was a big factor in the 1995 Confederations Cup, providing an assist against Saudi Arabia and scoring in the penalty shootout win against Mexico. However, his best display with the Denmark national team came in the 1998 FIFA World Cup, where he scored two goals and provided two assists as Denmark was eliminated by Brazil in the quarterfinals.

Despite not having played for any top European soccer club, Morten Olsen is one of the biggest legends in the history of the Danish national team. The sweeper had over 102 appearances for Denmark, which makes him the eighth-most capped player of all time, scoring two goals.

Olsen is among the captains with the most appearances for Denmark as he led his country at the 1986 FIFA World Cup and 1988 UEFA Euros. Morten Olsen is one of the most versatile players in Danish soccer history as he played in many positions, including winger, defensive midfielder, and center back.

After a Euro 2012 campaign as the backup goalkeeper, Kasper Schmeichel, the son of the legendary Peter, made his way to the starting goalkeeping spot, quickly establishing himself as one of the top goalies in Europe.

Known as a penalty specialist, Kasper Schmeichel’s saves from the spot were crucial for Denmark all throughout the team’s journey to the quarterfinals in the 2018 FIFA World Cup. Schmeichel saved a penalty against Peru to seal a 1-0 group stage win and stopped Luka Modric’s penalty in the quarterfinals to send the match to extra time. The OG Nice goalkeeper also had a fundamental role in the team’s qualification journey to the 2022 FIFA World Cup, keeping a clean sheet in each of the qualifying matches.

Who is the best men’s soccer player from Denmark?

Peter Schmeichel is the best Danish soccer player ever. With 129 caps, he is the Danish international with the most appearances of all time. He also has the highest number of clean sheets with 51 and is the only goalie in Denmark’s soccer history to have scored a goal. His miraculous saves and leadership were crucial for Denmark to win their first and only major trophy in the 1992 Euro.

Who is the best goalie from Denmark?

The Schmeichels have defended the Danish goal for decades, constantly putting the national team among the most solid defenses in Europe. Although Kasper is nearing many of his father's records as he is trying to bring another international trophy to Denmark, Peter Schmeichel is considered the best Danish goalie of all time. His saves led the Danes to one of the biggest Cinderella stories at the 1992 UEFA Euros.

Who is the best women’s soccer player from Denmark?

The Danish Women’s national team has taken part in four FIFA World Cup tournaments, reaching the quarterfinals in 1991 and 1995. The “Red and White” have had some great talent over the decades, including legendary center back Katrine Pedersen, whose 210 caps are the most in the team’s history, and forward Johanna Rassmussen. However, attacking midfielder Pernille Harder is considered the best women’s soccer player from Denmark ever, as she is the all-time leading scorer with seventy goals in less than 140 matches.