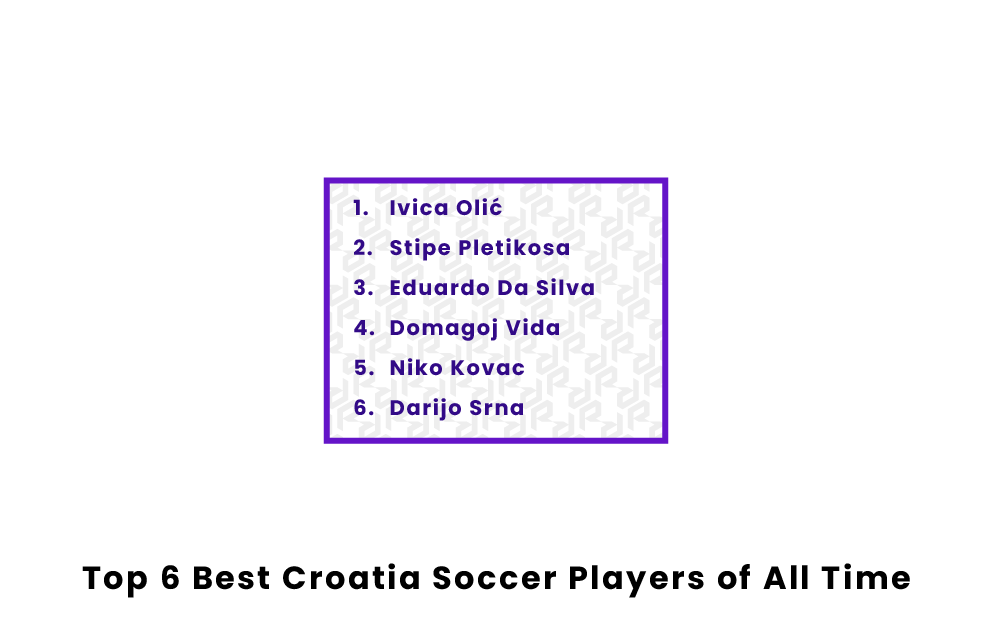 Though it is a small country, Croatia is known for its powerhouse soccer team. FIFA recognized Croatia as a national football team after the dissolution of Yugoslavia. In 1998, they competed in their first World Cup, and they just so happened to finish in third place. This year, the team plays their first game in the 2022 Qatar World Cup on November 23 against Morocco.

Who Are the Best Croatian Soccer Players Ever?

Born in Davor, Croatia (formerly Yugoslavia), Ivica Olić is a former player and current manager and assistant coach for Croatia. He was primarily a striker, playing in the forward position, having played for teams like F.C. Bayern Munich and CSKA Moscow and, obviously, the Croatian National Team. With the national team, Olić played in the 2002, 2006, and 2014 World Cups, becoming the oldest World Cup goal scorer of all time. In 2016, he announced through a letter that he would be retiring from the national team, and just one year later, he became the assistant coach.

Stipe Pletikosa was born in 1979 in Split, Croatia, a now popular tourist destination. He started playing professionally as a goalkeeper in 1996 when he played on a club team in Split. After a few years, he moved on and began playing for the Croatian National Team in 1999 while also playing for teams in the British and Russian Premier Leagues, La Liga, and more. He is known as one of the greatest goalkeepers of all time, winning many tournaments and individual awards as well. He retired in 2014 after 114 caps. In 2021, he joined the Croatian Football Federation as a technical director of the national senior and under-21 teams.

Eduardo da Silva is a Brazilian-Croatian soccer player who played on the Croatian National Team from 2002 until 2014. He played over sixty caps for the team and scored just short of thirty goals. He is Croatia's fourth-highest scoring forward ever. He was born in Rio de Janeiro, and while he became a Croatian citizen to play soccer for the country, he played for many club teams in Brazil as well, including Flamengo and Atlético Paranaense.

Domagoj Vida is a Croatian-born defender who plays for both the Croatian National Team and AEK Athens. He plays all defensive positions but does his best in the center or the right side. He began his career with the Croatian team in 2010 and has since played 99 caps! In his second game with the national team, he played all ninety minutes, and continued to prove himself as a trustworthy defender. He played as captain for the team for the first time in 2018 against Jordan. He has played in several World Cups for the nation and has appeared on this year’s preliminary roster.

Niko Kovač is a German-born, Croatian former soccer player and current manager. He began his professional career in 1996 as both a member of the Croatian National Team and the German club Bayer Leverkusen. A strong central midfielder, Kovač scored the winning goal for Croatia in the final qualifying match for the 2002 World Cup. In 2006, he became the captain of the national team before retiring two years later after the Euro 2008 tournament.

Darijo Srna is a former Croatian international soccer player who also played for the famous Ukrainian soccer club, Shakhtar for many years. Right now, Srna is the director of football of Shakhtar, always showing his loyalty to the growth and success of the club. Throughout his playing career, he played both midfield and defense. Srna played for the Croatian team from 2002 through 2016, becoming captain in 2009. By his retirement, Srna held the second-highest number of international appearances, with 134 caps.

Who is the best men’s soccer player from Croatia?

Ivica Olić is the best men’s soccer player from Croatia. Not only was he a loyal player to the Croatian national team, he was also a loyal club player throughout Europe during his tenure. He was a Champions League finalist in 2010 and 2012, a UEFA Cup winner in 2005, a German champion and DFB Cup Winner in 2010, a Croatian champion in 2002 and 2003, and won even more. Now, he is giving back to the soccer community as the assistant coach of Croatia.

Who is the best goalie from Croatia?

Stipe Pletikosa is the greatest Croatian goalkeeper. In 2013, he made NBC Sports’ best goalkeepers list for the year with one of his best saves for his club team in Russia. Stipe Pletikosa most certainly sets the scene for not only future Croatian goaltenders, but for goalies around the globe.

Who is the best women’s soccer player from Croatia?

Iva Landeka is the best Croatian women’s player of all time. At 33 years old, the defensive midfielder has played for the Croatian national team since 2006, making over fifty appearances. Additionally, Landeka has played in two World Cup qualifying matches and two UEFA Euro qualifiers.