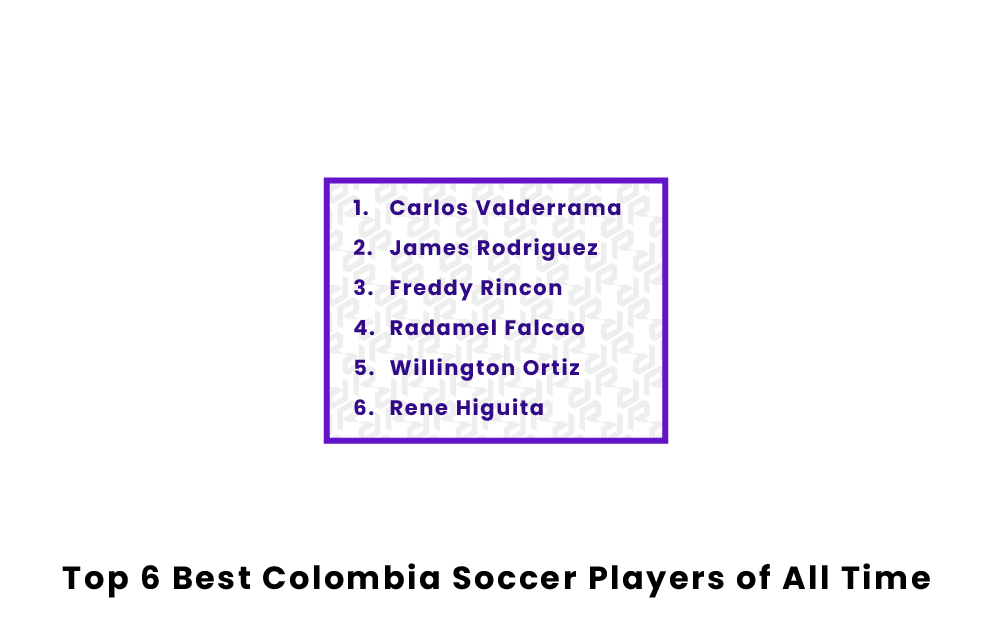 Colombia has a rich history of producing international soccer stars. While the South American country has not won a FIFA World Cup, its wealth of players have competed in club tournaments worldwide, demonstrating Colombia’s soccer talent. Here is the list of the top six soccer players from Colombia.

Who are the best Colombian Soccer Players ever?

The best Colombian soccer player of all time is Carlos Valderrama. The attacking midfielder was born in the city of Santa Marta in 1961. After playing soccer from a young age, Valderrama was called up to the Union Magdalena first squad, where he began his professional career in 1984. After his time playing in Colombia’s top flight, Valderrama moved to Europe, where he played for Montpellier in France and Valladolid in Spain. He ended his career in the United States in 2002 after playing for Tampa Bay, Miami Fusion, and finally, Colorado Rapids. In 1995, Valderrama was awarded the MLS player of the year award.

Rodriguez was born in the town of Cucuta in 1991. The midfielder played for the Envigado youth teams from a young age, eventually making his way to the first squad in 2007. James Rodriguez quickly drew acclaim for his playmaking abilities, earning him a spot in the Portuguese top team F.C. Porto in 2010. From 2014 to 2021, Rodriguez played for several other top-flight European clubs, including Bayern Munich, Real Madrid, and Everton F.C. In total, Rodriguez has scored 25 goals for the Colombian national team.

Rincon was born in 1966 and grew up in the town of Buenaventura. In 1986, he made his debut with Barranquilla FC, demonstrating his playmaking ability in the midfield. In 1994, he made his move over to Europe, where he was signed by the Italian team Napoli, and at his peak, Real Madrid. Rincon ended his successful European career and went to play in his home country, playing for CD America in 2013 after a long and successful 27 year career. While he has only scored 17 goals for the Colombian national team, he was a key playmaker throughout his time.

Falcao was born in 1986 and began his professional career playing for the Argentinian top-flight team River Plate in 2005. Falcao quickly drew international attention, eventually being recruited to the Portuguese powerhouse FC Porto in 2009. At his peak, the center forward was worth a whopping 60 million euros on the transfer market. So far, Falcao has played the majority of his career for top European teams, including Atletico Madrid, Monaco, Manchester United, and Chelsea. The center forward signed for Rayo Vallecano in 2021, where he continues to play in Spain.

Ortiz was born in 1952 in the city of Tumaco. In 1972, he began his professional career with Millonarios. Ortiz stayed with the side until he signed for Deportivo Cali in 1980. Just three years later, he transferred to CD America, where he stayed until his retirement in 1989. Willington Ortiz is unique, as he managed to become one of the best Colombian soccer players of all time without playing for a top-flight European club, demonstrating his gifted attacking ability. Like many midfielders, Ortiz was not a major goal scorer, instead acting as a key playmaker and build-up passing player.

Rene Higuita was born in Medellin in 1966. Alongside his successful goalkeeping career, Higuita is most known for creating the “scorpion kick,” an acrobatic kick that he performed in-game to clear an incoming shot. He made his professional debut playing goalkeeper for Millonarios in 1985, staying with the team for just one year until his departure for Atl. Nacional, another Colombian club. Higuita played the majority of his career in his home country until he retired in 2009 while playing for the Pereira soccer club.

Who is the best men’s soccer player from Colombia?

The best Colombian men’s soccer player of all time is Carlos Valderrama. Valderrama has played for top clubs such as Union Magdalena, Montpellier,  Valladolid, and the Colorado Rapids. In 1995, Valderrama was named the MLS Player of the Year. He is widely known for his progressive passing ability and for winning the French League with Montpellier in 1989. The legendary player retired in 2002 following his stint in the MLS.

Who is the best goalie from Colombia?

The best goalie from Colombia of all time is, without a doubt, Rene Higuita. Higuita was born and raised in the city of Medellin, where he began his professional career in 1985 playing for Millonarios. Over the course of his career, Higuita played for many different Colombian clubs, eventually retiring in 2009 after a 24-year run in goalkeeping. Aside from his shot-stopping talent, Rene Higuita is known for his creation of the “scorpion kick,” an acrobatic shot-stopping kick that he performed on the fly mid-game.