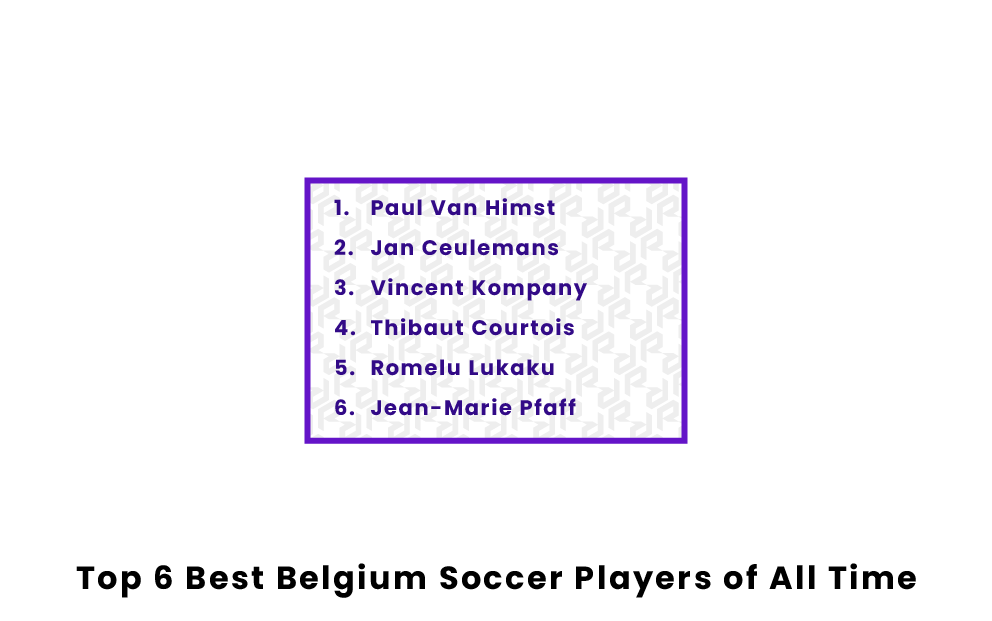 Soccer, mostly known as football in Europe, is played by people from all over the world and is also a part of the largest championships, such as the FIFA World Cup. One country participating in the 2022 FIFA World Cup is Belgium. Below are the six best Belgian soccer players of all time.

Who are the Best Belgian Soccer Players Ever?

Paul Van Himst, who played from 1960 to 1974, is one of the best goal-scoring players in the history of Belgian soccer. During his 81 matches for the Belgian national team, van Himst scored 30 times. Throughout his 14-year career, Van Himst has mostly played for RSC Anderlecht and played as a forward. While playing for Anderlecht, he won the Belgian Championship eight times and scored 223 goals in 457 appearances. Later in his career, Van Himst also worked as football manager for Anderlecht from 1983 to 1986 and for the Belgian national team from 1991 to 1995, including in the 1994 FIFA World Cup.

Jan Anna Gumaar Ceulemans played as an attacking midfielder and won the most international games in Belgium’s history. Ceulemas was well-known for his playing technique and his natural authority. Ceulemans played for his country’s club Brugge for 13 years and even declined A.C. Milan’s offer. He was named the Belgian Player of the Year as well as Belgian Professional Footballer of the Year three times throughout his career.

Vincent Jean Mpoy Kompany is a Belgian professional football manager and a former center back for the Belgian national team. Throughout his 15-year career, Vincent was not only an invaluable part of the Manchester City team, but he was also repeatedly called the best center back. Kompany was twice included in the Premier League Team of the Year in 2011 and 2012. He is considered to be one of the best defenders in soccer history.

Thibaut Nicolas Marc Courtois is a goalkeeper that plays for Real Madrid and the Belgian national team. He previously played for Chelsea but was loaned to Atlético Madrid. In 2014, Courtois returned to Chelsea and helped them win the Premier League title. In 2018, Courtois signed for Real Madrid and ended up being their most expensive goalkeeper. Throughout his career, Courtois has played for multiple soccer clubs such as Genk, Chelsea, Atlético Madrid, Real Madrid, and the Belgian national team. He has also repetitively been described as a “complete goalkeeper.”

Romelu Menama Lukaku Bolingoli is a striker for the Belgian national football team. He has played for numerous club teams, including Anderlecht, Inter Milan, Chelsea, Everton, and Manchester United. After joining Chelsea in 2011, he ended up coming back 10 years later and becoming the seventh-most expensive player on the roster. Lukaku has been playing soccer since he was five, starting at his local soccer team Rupel Bloom. He was later discovered by scouts from a Belgium Pro League club, which later resulted in him progressively growing as a soccer player and making it to the list of top players.

Jean-Marie Pfaff was one of the most important players of the entire Belgian gold generation. Throughout his 11-year career, he played in four major international tournaments: the European Championships in 1980 and 1984, and the 1982 and 1986 FIFA World Cups. As a player, Pfaff was known for his impeccable playing style and his quick reflexes that made him an even more valuable goalkeeper. Pfaff started his career at the age of 16 by joining K.S.K. Beveren. With Beveren, he won a Belgian championship title and a Belgian Cup.

Who is the best men’s soccer player from Belgium?

Paul Van Himst is considered the best Belgium soccer player ever. He has won the Belgian Golden Shoe award four times, which is a record. On top of that, the Belgian Football Association referred to him as the most outstanding player in the past 50 years. Throughout his career, Van Himst scored 235 goals in club play and 30 goals for the national team. Some fans even compare him to Pelé, saying that his playing style is very unique and his skills are irreplaceable.

Who is the best goalie from Belgium?

Thibaut Courtois is the best goalkeeper from Belgium. He received the Yashin Trophy from Football France, supporting the claim that he is one of the most impactful goalies in the world. As for statistics, he stopped 79.9% of shots on target and denied about 33% of penalties in 2022. When the Yashin Trophy voting results were revealed, they showed that 97% of votes were in his favor, and only three countries did not place him at the top of their list.

Who is the best women’s soccer player from Belgium?

Tessa Wullaert is the best women’s soccer player in Belgium. She is the top-scoring player with 65 goals in only 107 appearances. During the last two seasons, Tessa scored 79 goals and assisted 57 goals, making her one of the highest scorers in women’s soccer in Belgium.