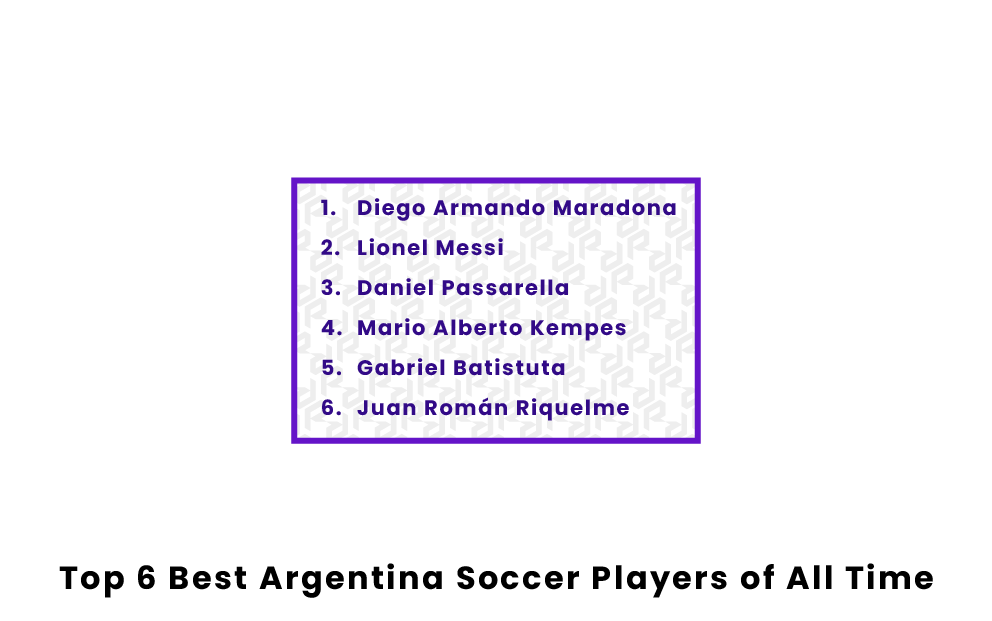 Despite winning only two World Cup titles in 17 appearances, the Argentinian National Team has had some of the most talented soccer players of all time wear their legendary “Albiceleste” jersey. Let’s find out who are the top six players in the history of the Argentinian Soccer National Team!

What are the best Argentina Soccer Players ever?

Considered by many to be the greatest player of the 20th century, Diego Armando Maradona won the heart of every Argentinian during the 1986 World Cup. His ten-goal contributions campaign, including the assist for the winning goal in the final, put him among the biggest legends in the history of the game.

Maradona made his international debut in 1977 at the age of 16 and wore the Albiceleste colors for 17 years, playing in four World Cups and taking his team to two back-to-back finals. He also won the Golden Ball at the 1986 World Cup and received many other awards for the second goal he scored in the quarterfinals against England.

Alongside Diego Maradona, Lionel Messi’s name is always included in the list of the greatest soccer players of all time. Argentina’s current captain is the all time leader in goals and appearances for the national team with over 90 goals in less than 175 caps.

After a World Cup final loss in 2014 and two straight losses in the Copa América final in 2015 and 2016, Messi led Argentina to a win in the 2021 Copa América in Brazil. His four goals and five assists earned him the honors of best player of the tournament. Lionel Messi also won the Golden Ball at the 2014 World Cup after his five goal contributions led his team to their first final in 24 years.

“El Kaiser,” as they used to call Daniel Passarella in his playing days, is one of the few players to have won multiple World Cups and the only to do so in Argentina’s history. Passarella was the captain of the 1978 World Cup side and was in the 1986 squad, helping his team with his great leadership despite being sidelined with an injury for the second tournament.

Daniel Passarella was a complete center-back with great touch and goal instinct, as shown by the fact that he went down as the highest scoring defender in the history of the national team with 22 goals in 70 appearances.

With six goals in the whole tournament, including the winning brace in the final against the Netherlands, Mario Alberto Kempes is considered the hero of the 1978 World Cup. His heroics also rightfully earned him the Golden Ball and the Golden Boot for that tournament.

Mario Alberto Kempes is a fan favorite in Argentina, especially among the older generations, as he led the country to their first ever World Cup win. This even led the mayor of Cordoba, Kempes’ hometown, to name the stadium of the city after him as a sign of gratitude for his stellar display at the World Cup. Kempes also took part in the 1974 and 1982 World Cup.

With 56 goals in 78 matches, Gabriel Batistuta is the second highest goalscorer in the history of the Argentinian national team. The former ACF Fiorentina and AS Roma player represented the Albiceleste in three World Cups scoring ten goals, which is tied for eighth highest of all time in the history of the competition.

Batistuta was one of the key players in the golden Argentina generation that won the Copa América in 1993 and 1995, scoring the winning goals in both finals. “Batigol” also won the Golden Boot at both the 1991 and 1995 Copa América and the Silver Shoe at the 1998 FIFA World Cup.

Although he only played 51 matches with the Albiceleste, Juan Román Riquelme went down as one of the classiest number ten in the history of Argentinian football. The Boca Juniors legend had 37 goal contributions for Argentina, including various free-kick stunners.

Juan Román Riquelme played at the 2006 World Cup wearing the prestigious number ten and dishing out three assists in the competition. He was also one of the stars of the team that made it to the Copa América final in 2007 and took part in the 2008 Summer Olympics, captaining Argentina to the gold medal and scoring in the semifinals win against Brazil.

Who is the best men’s soccer player from Argentina?

Diego Maradona is the all-time best men’s soccer player from Argentina. The Argentinian national team has had loads of talent including Sergio Aguero, Omar Sivori, Javier Zanetti and one of the other greatest players of all time, Lionel Messi. However, Diego Maradona is still considered the greatest player in the history of the national team, having led Argentina to two back-to-back World Cup finals and a win in the 1986 tournament where his five goals and five assists earned him the Golden Ball.

Who is the best goalie from Argentina?

Ubaldo Fillol is the best Argentinian goalkeeper of all time. Over the decades, Argentina has had some great goalkeepers like Nestor Pumpido and Roberto Abbondanzieri and some of the finest penalty specialists like Sergio Goycochea, Emiliano Martinez and Sergio Romero. However, former River Plate and Atlético de Madrid player Ubaldo Fillol tops them all as the greatest goalie in Argentina’s history. Fillol took part in the 1974, 1978, and 1982 World Cup, getting four clean sheets and contributing to Argentina’s first ever title.

Who is the best women’s soccer player from Argentina?

María Belén Potassa, former Boca Juniors player, is considered the greatest women’s soccer player in the country’s history for her crucial role in the 2006 Copa América. Similarly to many other countries in South America, Argentina recently started investing in women’s soccer. The team, which was only formed in 1993, has taken part in the 2003, 2007 and 2019 World Cup, never making it out of the group stage and won the Copa América in 2006 thanks to the four goals by Potassa.