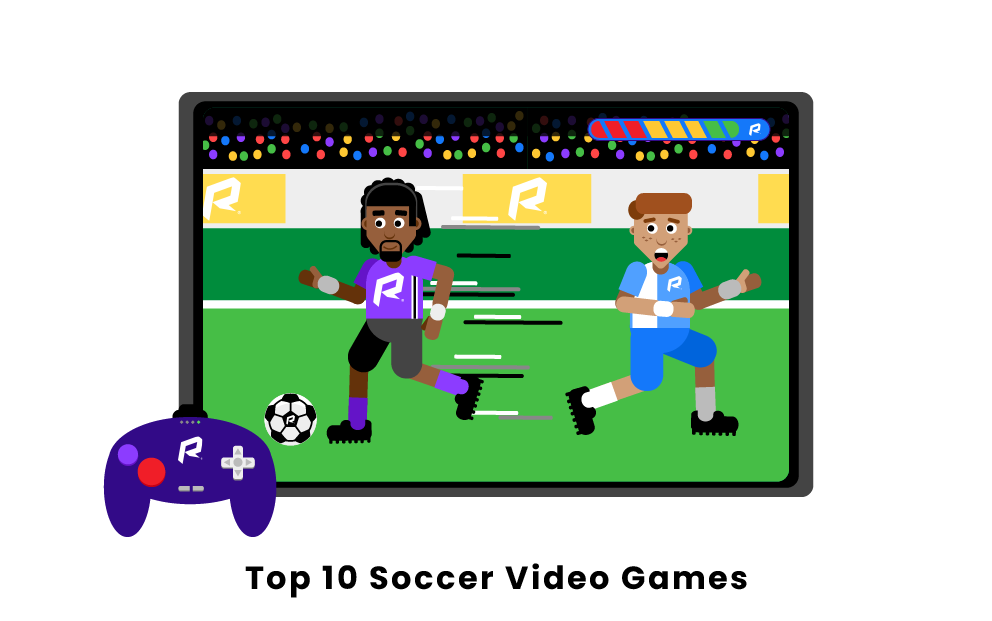 What Are The Most Popular Soccer Video Games?

FIFA 11 was developed by Electronic Arts, was released on September 28, 2010, and was available on IOS, PlayStation 3, Xbox 360, and PlayStation Portable. Overall, the FIFA games have been highly successful and raved about by fans for many reasons. Gamers believe that the FIFA series has been the best soccer video game series in the past decade. The graphics in this game on their own are phenomenal, as well as the sounds and controls in this game. FIFA 11 has also been praised for its 360-degree camera angles in the game over the previous eight camera directions beforehand.

Football Manager 2010 is regarded by fans as the best game of the whole Football Manager franchise. IGN ranked this game a 9.3 out of 10, which is an unheard-of score for a PC game. Football Manager 2010 came out on October 30, 2009, was developed by Sports Interactive and was available on Microsoft Windows, IOS, and Classic Mac OS. This game is praised for its wide selection of over 50 nations and 100 international leagues. The graphics in this game come in 3D and are spectacular and really help the game maintain an overall lifelike feeling.

The first game in the Mario Strikers series, Super Mario Strikers is somewhat of an oddball among soccer games, as it is not based on real-world soccer, but rather a fictionalized version of soccer involving characters, themes, and settings from Nintendo’s Mario universe. Released in 2005, the game is extremely popular both among soccer fans and fans of the Mario franchise. It features a version of soccer without standardized rules and without referees. The game is also notable for employing classic Mario power-ups, as well as special strikes which, when successful, earn players two goals instead of one. Because there are neither referees nor fouls, a major part of the gameplay involves kicking or striking other players, making Super Mario Strikers a much more intense and exciting variation of soccer, which no doubt contributes to its popularity.

FIFA 18 is another addition to the highly-praised and favored FIFA soccer video games series. FIFA 18 was released on September 29, 2017, was developed by Electronic Arts, and was released on Android, PlayStation 3, PlayStation 4, Xbox One, Nintendo Switch, Microsoft Windows, and Xbox 360. Fans loved how accessible this game was to them on many different platforms. The graphics in this game are phenomenal, as well as the very swift and fluid player controls as well. FIFA 18 does a wonderful job of making gamers feel that they are actually playing and fighting to win a soccer game.

Rocket League is a soccer game where players control rocket-powered cars instead of regular soccer players. Up to eight players on each team try to knock balls into their opponents’ goal in several single-player and mulit-player modes. Originally released by Psyonix for PlayStation 4 and Windows in 2014, Rocket League was one of the leaders in inter-console online play. It was eventually released for Xbox One and Mac and in 2020 transitioned to a free-to-play version. Rocket League has become a popular esport, with Psyonix hosting a yearly tournament series called the Rocket League Championship Series (RLCS).

Considered one of the best soccer games ever upon its release, Pro Evolution Soccer 2017 is the fan-favorite release from the FIFA franchise’s biggest competitor. The graphics and AI were some of the best in the industry, and the career mode was highly captivating and realistic. In a coup for the series, the ​​UEFA Champions League and UEFA Europa League were licensed for the game, adding extra realism. PES 2017 also offered online gameplay for endless matchups against friends and rivals.

Kick Off 2 was created as a sequel to the original Kick Off game. This game was developed by Dino Dini and Anco Software and was released in 1990. Kick Off 2 was available on AmigaOS and Atari ST. Kick Off 2 required players to think much more critically about passing, dribbling, and other important moves. Fans of this game also loved the addition of the 24 different referees because each one would make different calls during the games. The graphics in this game were and looked extremely real and were great for being developed in the late 80s to 1990s.

FIFA 12 is another FIFA game from the series that was a smash success with fans as well. FIFA 12 was released on September 27, 2011, by EA Vancouver and was available on the platforms: Android, Classic MAC OS, and PlayStation 3. This game was nominated for a BAFTA Games Award for Best Game, which proves it is one of the best FIFA games to grace the series. Gamers love the overall controls of this game and the different combinations of moves that were integrated into the game. This game also provided a competitive atmosphere which was fun for players to utilize when playing with friends.

Sensible World of Soccer was released in 1994 by Microsoft Corporation and Renegade Software and was available on the following platforms: Xbox 360, Amiga, DOS, and MS-DOS. Fans loved the simple and easy-to-understand controls in this game, which helped set the standard for soccer video game controls for the future. There was also an overhead view for players to rely on while playing the game in order to better understand where they should pass the ball, etc. At the time, the graphics were great, and the different modes that were offered within the game were also a nice feature.

Unlike most soccer video games, FIFA Street did not aim to provide a realistic experience of playing in a top-level match. Instead, the 2005 release was based on five-to-a-side street soccer, with games taking place in various urban locations. The five-on-five format made the game much quicker and more dynamic than typical FIFA releases, with more of an emphasis on performing tricks than scoring goals. Every court had a slightly different size and features, and a career mode kept players coming back for more.

Considered superior to the FIFA release from the same year, UEFA Euro 2008 focuses on a single tournament with exacting detail. Beloved by fans for that attention to detail, UEFA Euro 2008 was the most realistic soccer game at the time of its release. The game perfectly recreates the 2008 UEFA European Football Championship tournament, with customized celebrations and different pitches which are affected by the weather.

Nintendo World Cup was released on May 18, 1990, by Technos Japan and was available on Nintendo Entertainment System, Game Boy, Wii, Sega Genesis, Wii U, TurboGrafx-16, X68000, and TurboGrafx-CD. This game is loved by fans for its graphics, interactive storyline, and of course, the Double Dragon theme involved with the game. Gamers also loved that their characters had the ability to get physical on the field without fouls being called on them. Participants had the choice to change the playing field as well during the game, ranging from normal grass to ice. This game was also unique because each team had its own move at the end of each game.

Intertellivision Soccer was released by Mattel Electronics in 1979 and was one of the oldest soccer video games in history. For the time when the game was made, the graphics were phenomenal and should not be compared to newer games like FIFA. This game is so popular amongst fans because of how amazing it was as one of the first soccer video games. Ultimately, nothing beats a classic and original video game; Intertellisvison is exactly that. The controls are simple and crisp, and this game will always be regarded as an impressive soccer game for the rest of time.

International Superstar Soccer Pro is considered one of the best soccer video games according to soccer fans. This classic game was introduced to the gaming world on August 11, 1998, was developed by Konami, and was available on the PlayStation platform. There are six different modes of play in this game which include: Open Game, International Cup, World League, Penalty Kicks, Scenario, and Training. Players love the large selection of different teams available in the game, as there are over 60 teams as playing options. Players can also change the weather and the time of day for their games as well.

What is the best-selling soccer video game of all time?

EA Sports’ FIFA franchise is the best-selling soccer video game series of all time. Across 30 released games, the FIFA franchise has sold more than 325 million units as of 2021, actually earning their way into the Guinness Book of World Records for being the best-selling sports video game series of all time. EA’s latest FIFA release, FIFA 23, was played by approximately 10.3 million people in the first week after its release on September 30, 2022.

What are the top soccer games for Android?

While mobile gaming doesn’t offer as many high-tech options as traditional console gaming, there are many popular options for soccer-based video games on mobile services, such as Android. Some of the most popular Android soccer games include: Final Kick, Football Manager Mobile 2021, Head Soccer La Liga 2020, Dream League Soccer 2019, eFootball PES 2021, and FIFA Soccer. Each of these games offers unique perks for Android users, making them interesting alternatives to traditional console games.

What is the best soccer video game?

The question of the best soccer video game is one with a debatable answer, as there are so many excellent soccer video games, each with their own unique perks and drawbacks. However, among the contenders for this title, FIFA 11 is widely considered to be one of the best. FIFA 11 is held to be one of the best entries in the FIFA franchise for its controls, sound effects, and dynamic camera angles.