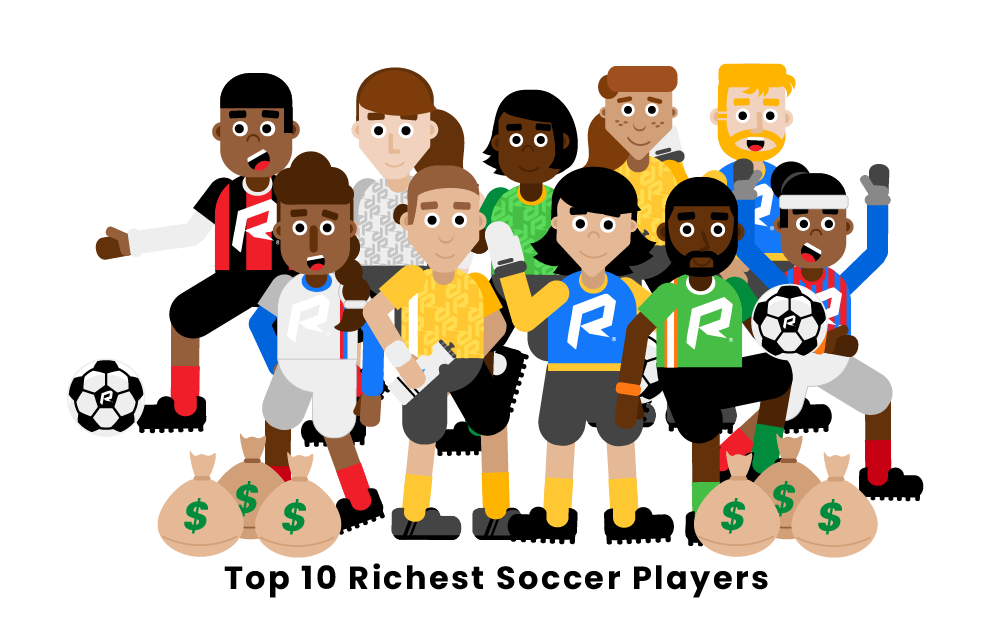 Soccer is the most widely watched sport in the world, so it should come as no surprise that professional soccer players can make an astonishing amount of money through their skill on the pitch. Read on to learn about the top ten richest soccer players of all time.

Who are the richest soccer players?

Cristiano Ronaldo is the wealthiest soccer player in the world with a net worth of $500 million. Ronaldo has earned a large majority of his wealth from his soccer contracts, becoming the first team-sport athlete to make over $1 billion in career earnings. Ronaldo joined the Italian club Juventus in 2018 after playing Real Madrid for nine years. He then rejoined Manchester United in 2021, where he began his rise to superstardom. Since 2003, Ronaldo has played for the Portugal national football team alongside his club career. Ronaldo is also known for his large social media presence, as he is the most followed athlete on Instagram with over 440 million followers. Some of his major sponsors include Nike, Unilever, Altice, and Herbalife.

David Beckham is an internationally-known soccer player best known for his playing days with Manchester United, who has managed to accumulate a net worth of $450 million. Beckham is a six-time Premier League champion, one-time La Liga champion, two time FIFA World Player of the Year runner-up, and has earned countless other distinctions on the pitch over the course of his career. However, his skills on the soccer field aren’t the only reason David Beckham finds himself so financially sound today. Beckham’s fame and looks have earned him extremely lucrative sponsorships with companies such as Emporio Armani, Kent & Curwen, Sainsbury’s, and Jaguar.

Lionel Messi is the third highest-paid soccer player of all time with a net worth of around $400 million. Over the course of his career, he has won seven Ballon d’Or awards and ten La Liga titles. Considered to be one of the greatest to ever play the sport, Messi signed not only the largest contract in soccer history but also the largest contract in the history of sports in 2017. This renewed contract with Spanish club FC Barcelona netted Messi a total of $674 million over four years. His average annual value for this contract was nearly $100 million higher than the next highest contract in all of sports! The Argentinian now plays for french club, Paris Saint-Germain after his 17-year tenure with Barcelona. Some of Messi’s major sponsors include Adidas, Gatorade, Pepsi, and Huawei. His deal with Adidas is a lifelong deal.

While Dave Whelan may not have had the illustrious career as many others on this list, he still boasts a net worth of around $220 million. He began his career with the Blackburn Rovers in 1956 and was eventually sold to Crewe Alexandra F.C. However, where Whelan made the majority of his wealth was following his playing career. He undertook numerous business ventures including turning JJB into a premier sports retailer in England. Most notably, Whelan brought Wigan Athletic F.C. from Division Three to the Premier League under his ownership.

Neymar endured a meteoric rise to fame, and has since accrued a net worth of around $200 million. Neymar plays for french club, Paris Saint-Germain, and earns around $80 million per year. His transfer from FC Barcelona to Paris Saint-Germain is the most expensive club transfer in history which is valued at $263 million. Some of Neymar’s major sponsors include Nike, Beats Electronics, Gillette, Red Bull, and Mastercard. In 2016, Nike’s Jordan Brand signed Neymar as their first soccer ambassador.

Zlatan Ibrahimovic is one of the most memorable players in the history of soccer, and also sports a net worth of about $190 million. Zlatan has played for a wide range of clubs during his career on the pitch, including Juventus, Inter Milan, Barcelona, Paris Saint-Germain, Manchester United, and the LA Galaxy. Across his time with each of these teams, he has time and time again proven that he is an all time talent in the world of soccer. His skills are backed by seven Serie A titles, four Ligue 1 titles, one La Liga title, and 11 Ballon d’Or nominations. Playing during the same era as all-time greats like Lionel Messi and Christiano Ronaldo may have hindered his overall reputation as a generational talent, however it has far from hurt his ability to obtain sponsorships. Current and past sponsors of Zlatan include Nike, Adidas, Puma, Microsoft Xbox, and Volvo.

Wayne Rooney is a British soccer legend who has managed to accumulate a net worth of $170 million. Rooney played for four different clubs during his soccer career, Everton, Manchester United, D.C. United, and Derby County. Rooney was extremely well regarded during his playing days, earning accolades including five Premier League titles, one FA Cup title, three EFL Cup titles, and induction into the Premier League Hall of Fame, among many others. He is also the all-time leading goal-scorer for both Manchester United and the England national team with 253 goals and 53 goals, respectively. Outside of his dominance on the pitch, Rooney garnered massive sponsorship deals with a number of brands, such as Nike, Coca-Cola, and EA Sports.

Alexandre Pato is a Brazilian soccer player who currently holds a net worth of $145 million. Pato has spent most of his playing career with Brazilian clubs like São Paulo, Corinthians, and Internacional, however he has also spent time with non-Brazilian clubs like AC Milan, Chelsea, and Orlando City SC. Pato has been a part of some dominant clubs, with team distinctions like Serie A champion (1x), the 2006 FIFA World Cup title, and both a silver and bronze Olympic medal playing for Brazil. Outside of his salary as a player, Pato has also racked up his fair share of endorsements, including Nike and CoverGirl Cosmetics. He also has various business investments, such as a perfume brand called “With Love From Alexandre,” a chain of burger restaurants called “Fat Pato Burger,” a vodka brand called “Pure Wonderpato,” and his own soccer club called Pato Branco Angels.

Garreth Bale is a very well-known Welsh soccer player with a total net worth of approximately $145 million. Bale has spent the majority of his playing career in Europe, playing for clubs like Southampton, Tottenham Hotspur, and Real Madrid. He has been a part of some extraordinary clubs during his time on the pitch, earning team accolades such as three La Liga titles and three FIFA Club World Cup titles with Real Madrid. On the individual side of things, Bale has earned distinctions such as 2010 and 2013 UEFA Team of the Year selection, The Football League Team of the Decade selection, the  ‘12-‘13 Premier League Player of the Season, and is widely regarded as one of the greatest Welsh soccer players of all time. Outside of his spectacular playing career, Bale has also made a good deal of his wealth through endorsements with brands like Adidas, Nissan, Foot Locker, Duracell, and EA Sports.

Paul Pogba claims his place on the list with a net worth of around $125 million. As one of the youngest players on this list, Pogba has enjoyed his share of success at both the club and international levels. After playing for Juventus for four years, Pogba transferred back to Manchester United in 2016 for a five-year contract. His transfer fee cost the club $120 million. Once his contract expires in June 2022, Pogba is expected to leave Manchester United once more and sign another lucrative contract elsewhere. Some of his major sponsors include Pepsi and Adidas. He is known for promoting charities to clean oceans and end racism. He also has his foundation which focuses on providing clean drinking water to communities in Africa.

Andres Iniesta is a Spanish midfielder who has garnered a net worth of around $120 million. Iniesta played for FC Barcelona for 16 seasons and was captain for three of those years. At Barcelona, he played alongside Messi and won nine La Liga titles. In 2018, he joined Japan’s Vissel Kobe squad on a three-year deal. In the 2010 World Cup, he scored the goal that won Spain the title. Some of his major sponsors include Asics and Mikakus. After a two-decade deal with Nike, he signed a multi-year deal with Asics.

Mesut Ozil is a German midfielder who gained a net worth of $120 million. While he started out playing for a few different clubs in the German Bundesliga, Ozil rose to fame during his tenure with Real Madrid. He moved over to Arsenal in 2014, but has since transferred to Turkish club, Fenerbahçe S.K. Although he played for the German national soccer team and won a World Cup in 2014, Ozil retired from international competition in 2018. Some of his major sponsors include Adidas, Beats Electronics, and Mercedes-Benz.

Kylian Mbappe is the youngest player on this list, but still has a net worth of $110 million. The French phenom has already enjoyed a successful career, with four Ligue 1 titles with Paris Saint-Germain and one World Cup victory. After considering a move to Real Madrid, Mbappe decided to sign a new lucrative deal to stay with PSG until 2025. In 2018, he became the youngest French player in history to score during the World Cup and second-youngest player to score during the World Cup finals. Some of his major sponsors include Nike and Hublot. In December 2019, Nike released Mbappe’s first Mercurial shoe.

Why is Ronaldo the richest soccer player?

Despite earning $64 million annually in comparison to Messi who earns $72 million, Ronaldo’s endorsements are valued highly. His endorsements earn him about $45 million per year. Not only that, but he also has a large social media presence on Instagram, Facebook, and Twitter which helps build his brand. Ronaldo also has his own CR7 line which sells eyewear, footwear, underwear, and more. His CR7 brand helps increase his earnings as well.

What is the difference between salary and endorsements?

An annual salary is paid to the soccer player by their designated club. Most of them sign a contract for a few years (eg. three or five years) and it will be stated how much they will make every year. Contracts may be renewed or often what happens is another club may offer a better deal, so players may transfer. Endorsements or sponsorships are paid by external companies who pay the players to promote their brands.

Why do companies pay soccer players for sponsorships?

Major companies pay soccer players for endorsements/sponsorships because of the weight the player’s names carry and the exposure they bring. Soccer is a world-renowned sport and people everywhere are watching and idolizing these players. When companies pay the players to become the face of their products and promote them, this prompts their fans to buy these items as well. Fans are easily influenced by their favorite players and companies monetize off that.

What are some of the largest endorsement deals with soccer players?