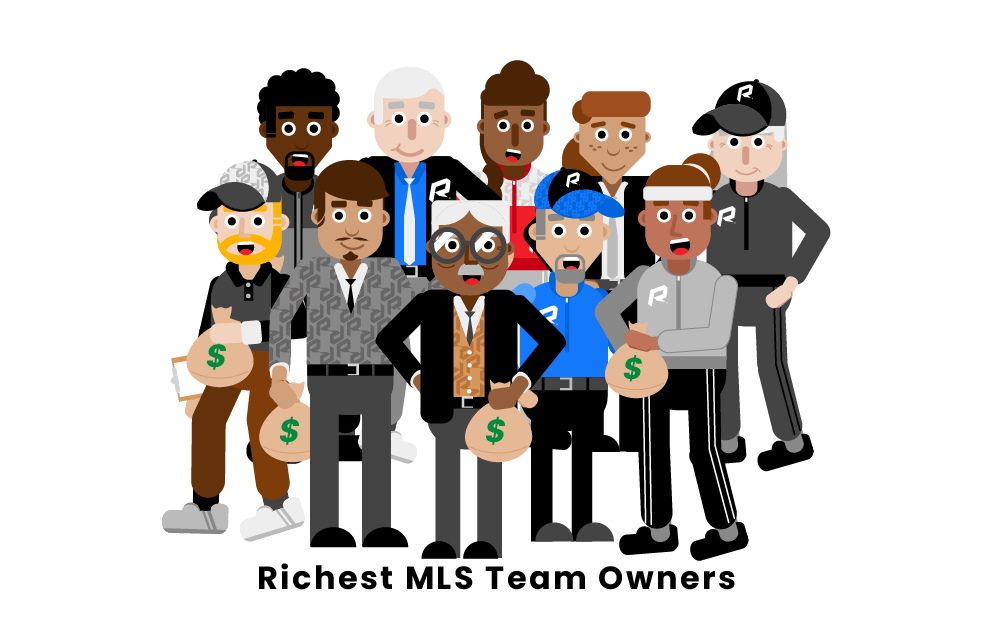 In the United States, professional soccer is rapidly growing in popularity. As the MLS gains new fan support each year, it also grows in value. Many teams have been purchased by billionaires in recent years for investment opportunities. Here is a list of the top ten richest MLS team owners to date.

Who are the richest MLS Owners currently?

It is estimated that Sheikh Mansour’s individual net worth is around $17 billion, though Mansour's family is believed to have far more wealth, being related to the United Arab Emirates’ royal family. Mansour is the second richest MLS soccer team owner, owning a large share of New York City Football Club. Sheikh Mansour is an important figure in the United Arab Emirates, having served directly with the U.A.E’s president, and is very involved in his country’s politics. Among his investments, Mansour owns a majority stake in Manchester City Football Club and is known around the world for his investments in sports.

Stanley Kroenke is the third richest MLS team owner on the list, having an estimated net worth of $12.9 billion. Kroenke built his fortune investing in real estate and later sports teams. Specifically, Kroenke owns a large amount of retail real estate properties around the country, as well as land. Using his real estate earnings, Stan Kroenke began investing in sports teams. Kroenke is recognized as the owner of the Colorado Avalanche, Colorado Rapids (MLS), Denver Nuggets, and most notably, Arsenal, one of the major soccer teams in the English Premier League. Currently, Kroenke resides in Texas.

Robert Kraft has an estimated net worth of $8.3 billion, making him the fourth-richest MLS team owner in the league. Kraft was born in Massachusetts in 1941. When he was older, he attended Columbia University and later Harvard University. Robert Kraft made his fortune after founding International Forest Products, a company that deals with wood and paper products. He is most widely known for owning the New England Patriots, buying the team in 1994. In the MLS, Kraft owns the New England Revolution. Through his success in the paper and wood industry, Kraft focused his income on sports investments, becoming one of the most well-known sports team owners.

Born in New York State in 1942, Arthur Blank has a net worth of $7.6 billion. After being fired from his job, Blank and his business partner co-founded Home Depot, one of the largest national hardware stores in the country. He stayed with his company until retiring in 2001, going on to buy the Atlanta Falcons, an NFL team. In 2017, Arthur Blank created Atlanta United Football Club, becoming involved in the MLS. Blank is renowned for his self-made fortune, as well as for introducing professional soccer to Atlanta. Furthermore, Arthur Blank has made large contributions to charities in recent years, pledging to donate half of his wealth in 2012.

Patrick Soon-Shiong has a net worth of $6.7 billion. Originally, Soon-Shiong was a doctor, though he is most known for founding the companies Abraxis and American Pharmaceutical Partners, as well as creating the cancer drug Abraxane. Soon-Shiong sold his drug companies in 2010 for a whopping $9 billion. Since then, Soon-Shiong has continued working in the medical industry, creating his other companies Nantkwest, NantHealth, and NantWorks. Patrick Soon-Shiong is now the majority owner of D.C. United, one of the MLS’s oldest soccer teams, and also owns large shares in the Los Angeles Lakers. Additionally, Soon-Shiong entered the media industry, buying out the San Diego Tribune and the Los Angeles Times.

Mark Wilf made his fortune in the real estate industry, building a net worth of a whopping $5 billion. Mark Wilf was born in 1962 to a family of Holocaust survivors. He started his career with his brother, renting out apartment units. Eventually, Wilf founded the real estate powerhouse Garden Homes, ramping up his investments. Currently, Mark Wilf is the president of the Minnesota Vikings NFL team and owns a majority stake in the Orlando City Soccer Club. Furthermore, Wilf also owns the Orlando Pride, a professional women’s soccer team in the NWSL. Wilf is known for his generous contributions to Jewish groups in the United States as well as in Israel.

Giuseppe Saputo is a Canadian businessman that has a net worth of an estimated $4.9 billion, making him the eighth richest MLS team owner. Saputo currently owns a majority share of the MLS team CF Montreal. In 1954, Giuseppe’s father, Emanuele, founded Saputo, a cheese and dairy powerhouse, after immigrating to Canada from Sicily. Later, Giuseppe went on to create CF Montreal in the 1990s. The Saputo family is known worldwide as their dairy products are sold in over 40 different countries. Giuseppe, commonly known as Joey, is credited with popularizing soccer in Montreal, as well as expanding the MLS in Canada.

Joe Mansueto has a net worth of $3.7 billion. He was born in 1956 in Indiana and later attended the University of Chicago, where he received his MBA. In 1984 Joe Mansueto began his entrepreneurial career when he founded Morningstar, a financial service company that provides market research and investment management. After amassing his fortune in the investment research and financial services industry, Mansueto purchased a majority stake in the Chicago Fire MLS team. Later in 2021, Joey Mansueto went on to purchase a stake in FC Lugano, another professional soccer team that is based in Switzerland. Mansueto and his wife are known for their philanthropic efforts, having donated millions to different causes.

Meg Whitman was born in Spring Harbor, New York, in 1956 and has a net worth of $3.1 billion. Whitman received her MBA from Princeton University. Later, she built her fortune after working for eBay and Hewlett Packard, where she served as their CEOs. After earning her wealth, Whitman moved into politics, acting as the national co-chair for Senator John McCain during his 2008 presidential campaign. Later, Meg Whitman ran for Governor of California under the Republican party but eventually lost the campaign. Whitman and her husband currently own a minority share in the MLS team FC Cincinnati after having spent $100 million for their stake.

Who is the richest MLS Team owner?

Who is the youngest MLS Team owner?

At 47 years old, the youngest MLS team owner is David Beckham, who owns a partial stake in the MLS team Inter Miami C.F. David Beckham is no stranger to soccer, as the partial owner made his name playing soccer for top European clubs as well as England’s national team. At the end of his playing career, David Beckham played in the MLS for L.A. Galaxy. Following his retirement, Beckham invested some of his fortunes into team ownership, becoming one of the co-owners of Inter Miami C.F.