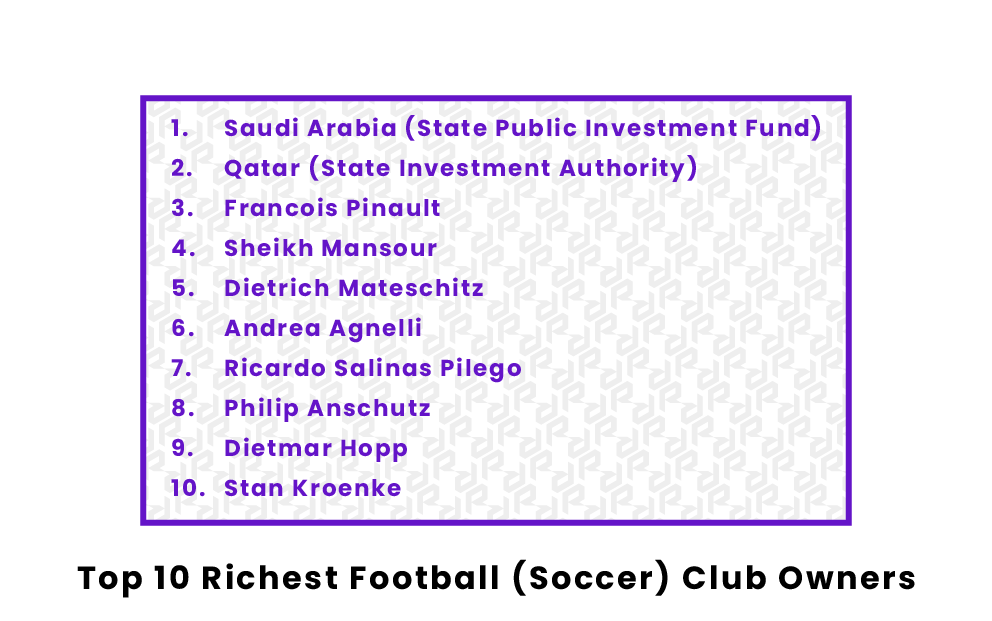 Who Are The Richest Football (Soccer) Club Owners Currently?

In 2011, the legendary soccer club Paris Saint-Germain was bought out by the Qatar Sports Investment Authority, officially making the owner the second-richest soccer club owner in history; estimates place the net worth of the owning party around $250 billion. Run by Nasser Al-Khelaïfi, Paris Saint-Germain’s chairman, the 2011 buyout was the first time in history a government invested in a private soccer club. Similar to the Saudi Arabian State Public Investment Fund’s purchasing of Newcastle United, the Qatar Sports Investment Authority has nearly infinite monetary resources.

Francois Pinault’s net worth is estimated to be $33.5 billion, making him the third richest soccer club owner. Francois Pinault made his money by creating and owning the luxury company Kering, the owner of brands such as Gucci and Saint Laurent. Furthermore, Francois Pinault and his family own Christie’s Auction House, a luxury art and goods auctioning company, as well as a valuable art collection. Pinault owns the French Ligue 1 soccer team, Stade Rennais F.C.. While the team is far smaller and less wealthy than the Ligue 1 giant Paris Saint-Germain, Pinault’s net worth makes him the third-richest soccer club owner.

Dietrich Mateschitz is the fifth-richest soccer club owner, holding an estimated net worth of $22 billion. Mateschitz was a co-founder of Red Bull, the globally dominant energy drink brand, in the 1980s. After making his money through the energy drink brand, Mateschitz directed his company towards sports team ownership, becoming the owners of the New York Red Bulls, RB Salzburg, and RB Leipzig, top-tier soccer clubs in the United States and Germany. The energy drink company co-founder has ownership over three different professional soccer teams, making him the fifth-richest owner on the list.

Andrea Agnelli holds sixth place on this list, coming in with a net worth of roughly $17 billion. The Italian owner of the soccer club Juventus F.C. earned his wealth by working his way up through multiple large companies, starting with Ferrari. Currently, Andrea Agnelli is on the board of directors for IFI S.p.A, a commercial furniture company based in Italy. Additionally, Agnelli also holds leadership roles in Fiat, BlueGem Capital Partners, and Giovanni Agnelli BV. Agnelli’s Juventus F.C. is one of the most successful Italian soccer clubs in history.

Born in Mexico City, Ricardo Salinas Pilego has grown his net worth to roughly $11 billion, making him the seventh-richest soccer club owner. Ricardo Pilego inherited the Mexican company Grupo Elektra, a retailer tied to the Banco Azteca lending service, from his family, and went on to own the second largest Mexican TV company, TV Azteca. Currently, Ricardo Salinas Pilego owns the Mexican Club Mazatlán Futbol Club. The Mexican retail and media billionaire maintains his place as the seventh richest soccer club owner on this list.

With just under a net worth of $11 billion, Philip Anshutz’s $10.8 billion net worth places him in the eighth position on the list. The billionaire from the United States built his net worth in multiple industries, ranging from railroads and energy to telecom, TV, and even real estate. Currently, Philip Anschutz owns the MLS soccer club L.A. Galaxy, one of the most successful American teams. Alongside his soccer team ownership, Anshutz also owns stakes in the Los Angeles Kings hockey team, as well as the L.A. Lakers basketball team. Among his real estate holdings, the Staples Center is his prized asset.

Dietmar Hopp has a net worth of roughly $9.2 billion, ranking him the ninth-most wealthy soccer team owner. One of the original members of the technology giant IBM, Dietmar Hopp left the company in the late 1980s to start his own software company SAP. In the late 1990s, Hopp transferred the majority of his company’s ownership to his newfound charity, Dietmar Hopp Stiftung, donating to causes such as medicine and education. Notably, Hopp’s charity has invested large sums into the German vaccine developer CureVac. The German billionaire currently owns the German Bundesliga club TSG 1899 Hoffenheim.

The second American on the list, Stan Kroenke, has a net worth of around $8.6 billion, placing him in the number 10 spot. Interestingly, Kroenke made his fortune by investing in residential and commercial real estate. Using his real estate earnings, Stan Kroenke turned his focus onto sports teams. Kroenke is the owner of the Los Angeles Rams, Colorado Avalanche, Denver Nuggets, and most notably, Arsenal F.C., one of the largest soccer clubs in the world. Kroenke’s net worth of $8.6 billion and his ownership of Arsenal F.C. makes him the tenth-richest soccer club owner.

Who is the richest soccer club owner?

The richest soccer club owner is, surprisingly, the Saudi Arabian government. One of just two club owners that are tied to a government, the Saudi Arabian State Public Investment Fund bought the English Premier League soccer club Newcastle United in 2021. Estimates on the State Public Investment Fund place their net worth around roughly $300 billion, although, as it is backed by the state, the investment fund has nearly infinite resources. The founder of the fund is the Saudi Crown Prince, Mohammed bin Salman.

Who is the youngest soccer club owner?

The youngest soccer club owners are actually a group of teenagers from Great Britain. In 2019, a group of seven 19-year-olds bought their local soccer club, Walton & Hersham F.C. Despite Walton and & Hersham F.C.’s low ranking in the English soccer league pyramid (standing as a non-league club), the group of friends’ ownership of the club makes them the youngest soccer team owners.