Top 10 MLS Rivalries of All Time 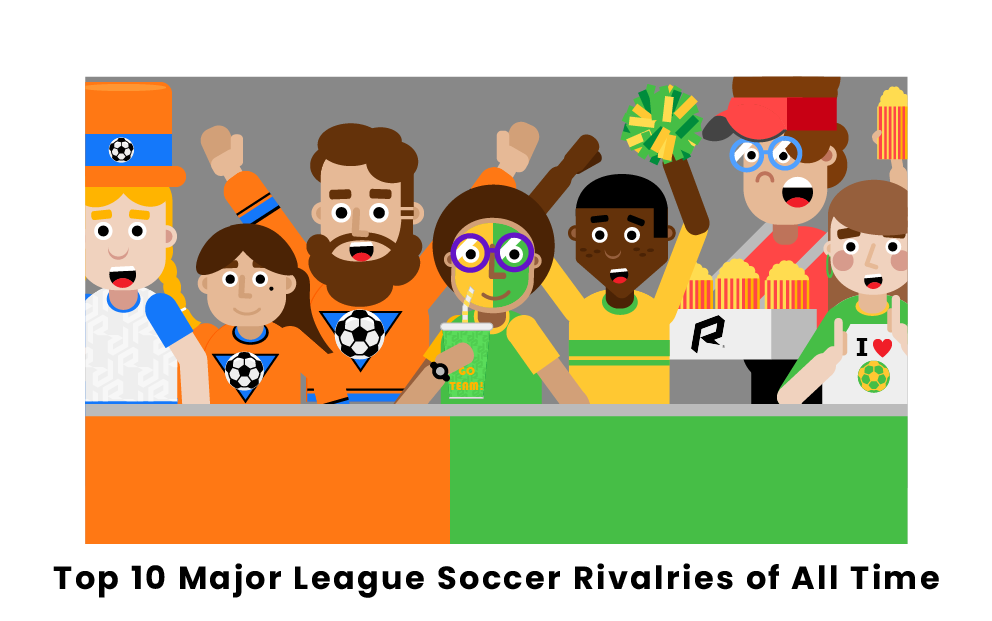 The MLS is growing exponentially in terms of popularity both in the United States and abroad. This is partly due to the many rivalries amongst the teams. Many new fans are starting to watch MLS games thanks to rivalries such as the Cascadia Cup or El Tráfico, which display high levels of competitiveness and passion.

What are the Biggest MLS Rivalries of All Time?

The Cascadia Cup is widely considered the biggest rivalry in the MLS. What started as a regional contest, which involved the Vancouver Whitecaps as well, is now regularly a head-to-head between the Seattle Sounders and Portland Timbers, two of the top teams in the whole league. Over the years, games between Seattle and Portland have seen great moments by MLS legends such as Clint Dempsey, Diego Valeri, Obafemi Martins, and Darlington Nagbe. This is also one of the most established rivalries in the MLS, as the Cascadia Cup was first played in 2011. 2021’s edition was a close contest as both teams were in the playoffs, with Portland even reaching the final.

Although this is a young rivalry, with LAFC only joining the MLS in 2018, El Tráfico has quickly become one of the most popular games during the regular season. Dubbed “El Tráfico” due to the infamous traffic congestion in Los Angeles, this is one of the only two derby matches between teams based in the same city. In recent years, the two teams have put on a great show thanks to the rivalry between 2019 MLS MVP Carlos Vela and European soccer legend Zlatan Ibrahimovic. In the first-ever matchup dubbed “El Tráfico,” Zlatan Ibrahimovic came off the bench to score a debut brace that helped the LA Galaxy win 4-3 after starting down three goals.

Established in 2002, the Atlantic Cup is part of the great sporting rivalry between New York City and Washington DC. Similar to the Washington-New York matchup in the NFL, DC United and the New York Red Bulls play each other twice in a home-and-away series that awards the Atlantic Cup. Over the years, former European soccer greats such as Thierry Henry, Shaun Wright-Phillips, and Wayne Rooney have made the rivalry between the two fan bases even stronger. 2021’s Atlantic Cup saw two really close contests as both teams were trying to sneak in the playoffs with the last seed in the Eastern Conference.

Before LAFC joined the MLS, the California Clasico was deemed the main rivalry in the region. Both teams have great histories in the MLS, as the San Jose Earthquakes have won the MLS Cup twice, while the LA Galaxy holds the league record with five. The two teams have also had some of the greatest MLS players of all time on their rosters. Players like David Beckham, Robbie Keane, and Steven Gerrard all played for LA Galaxy, while the Earthquakes were home to Chris Wondolowski, the MLS all-time leading goal scorer, who made LA one of his favorite victims with twelve goals in his California Clásico career.

Similar to the case of El Tráfico, the Hudson River Derby is a relatively young rivalry as New York City FC joined the MLS in 2015. However, this has become one of the fiercest rivalries in the league, especially due to the opposition of the Red Bulls’ fanbase to the creation of another MLS team in New York. The Red Bulls have long dominated the scene in the MLS, while NYCFC was crowned MLS Cup Champions in 2021, which makes this rivalry a must-watch for the years to come. Sharing the same city also allows for away fans to fill up the opponents’ stadium, which is a great spectacle even for neutral fans.

After the NHL, the MLS is the American sports league with the largest number of Canadian teams. For geographical reasons, the main Canadian rivalry involves the Montreal Impact and Toronto FC. This long-standing rivalry was established in 2012 and has become one of the best parts of the MLS regular season. From 2016 to 2021, both teams have become major threats within the MLS, with Toronto FC appearing in the MLS Cup final twice, winning it once. CF Montreal has also reinforced its roster with notable players such as Victor Wanyama, Didier Drogba, and Romell Quioto.

The Texas Derby is a rivalry between two of the oldest teams in the MLS, with both teams having played in the league for over fifteen years. Houston Dynamo joined the league in 2006, while FC Dallas is one of the ten founding teams that started playing in 1996. The Texas Derby has seen some great young talent in recent seasons. For years, the Dynamo were playing entertaining soccer thanks to the Honduran winger duo composed of Alberth Elis and Romell Quioto, while FC Dallas has counted on USMNT striker Ricardo Pepi.

Together with the Hudson River Derby and El Tráfico, the Hell is Real Derby is one of the MLS rivalries to look out for in the future. FC Cincinnati is the second youngest team in the MLS, having joined the league in 2019, while Columbus Crew SC won the MLS Cup in 2019. In the three seasons of this rivalry, both teams have always put on a great display, with the best game being the Columbus Crew SC’s 3-2 comeback in August of 2021. After going down 2-0, the Crew facilitated a miraculous comeback thanks to a brace from Michael Berry and a goal from MLS All-Star Lucas Zelarayán.

The Rocky Mountain Cup, like the Texas Derby, is one of the oldest rivalries in the MLS, as the Colorado Rapids are one of the founding members of the league, while Real Salt Lake has been playing in the MLS since 2005. Both teams made the playoffs in 2021, with Colorado finishing first in the Western Conference and second in the overall league standings. Over the years, the Rocky Mountain Cup has seen plenty of goals, with the greatest game between the two teams taking place in 2018. In a red card-filled contest, Real Salt Lake was able to put six goals past legendary goalkeeper Tim Howard, giving Colorado its largest loss ever in the rivalry matchup.

The Brimstone Cup was created in 2001, following the great start in MLS history from the Chicago Fire FC. In 1998, the Fire were able to win the MLS Cup in their first-ever season in the league and reached another final in 2000, which started the rivalry between the two teams’ fan groups. The two teams initially faced each other four times a year, but due to changes in the MLS scheduling format, the Brimstone Cup has not been played since 2019. However, the 2019 matchup between the two teams was one of the most spectacular games in the history of the rivalry, with the Fire earning a 4-0 victory.

The Atlanta United-Orlando City rivalry is known for being rather one-sided, as Atlanta United has thus far won every single match in which these two teams have met. However, this rivalry is known for the intense bitterness and contention between its players and fanbases. One of the major instigators of competitiveness between the two teams is Atlanta forward Josef Martinez, who is known for his skill and his brash trolling of Orlando City on social media. This has led to a great deal of animosity between the teams’ fanbases, with Orlando’s fans routinely booing and jeering at Atlanta and their players during matchups. While it may be a one-sided contest, this rivalry stands out as one where there is certainly no lack of devotion amongst its members.

Originally a rivalry created for the USL, the Copa Tejas (Texas Cup) migrated to MLS in 2021, introducing a new rivalry to the long history of matchups in the league. The Copa Tejas also includes a third MLS team, Houston Dynamo FC, but thus far, only two of the three participating teams (FC Dallas and Austin FC) have won a title in the rivalry. Each team has a solitary victory, with FC Dallas winning the first MLS Copa Tejas in 2021, and Austin FC winning the Cup in the following year. Though it is a relatively new rivalry, the Copa Tejas is certainly one to watch in the years to come, as it definitely promises to result in many intense matches as it becomes less of a two-team rivalry and more of a three-team matchup.

In one of the oldest rivalries in American soccer, the Seattle Sounders and San Jose Earthquakes have been facing off since 1974. At the time, both teams belonged to the North American Soccer League (NASL). After a hiatus, the rivalry was rekindled when the two teams joined the MLS in 2009. The same year, the Heritage Cup trophy was designed by an Earthquakes fan and the rivalry began to be formally contested, using the final two matchups of the season to determine a winner. The Earthquakes won the first cup, but it took a few years for the rivalry to heat up as both teams viewed other rivals as more important at the time.

What is the biggest MLS rivalry?

Rivalry games such as El Tráfico, the Hudson River Derby, and even the Canadian Classique have gained great popularity in recent years. However, the Cascadia Cup is still regarded as the best contest during the MLS regular season. This rivalry was formed ten years ago, and it has constantly provided fans with some of the best games of the season. One of the more memorable contests between the two teams in August of 2021 saw a dominant 6-2 away win from the Seattle Sounders, despite the great talent on the Timbers’ side.

What is the oldest MLS rivalry?

Established during the inaugural season of the MLS in 1996, the California Clásico and the Atlantic Cup are the two oldest rivalries in the league’s history. All four teams are founding members of the league, and they all have reached the MLS Cup in their history, with the Galaxy, DC United, and the Earthquakes winning it more than once. These rivalry cups constantly feature great players on the rosters and are some of the season’s most entertaining games.

Which MLS rivalry has featured the most MLS Cup matchups?

In twenty-five years of activity, the only rivalry game to ever feature in an MLS Cup has been the California Clásico. In 2001, the San Jose Earthquakes defeated the Los Angeles Galaxy to win their first title in the sixth edition of the MLS Cup. The game was filled with drama, as San Jose came back to win it in the ninety-sixth minute after Los Angeles had initially taken the lead in the twenty-third minute.

Pages Related to Top 10 MLS Rivalries of All Time