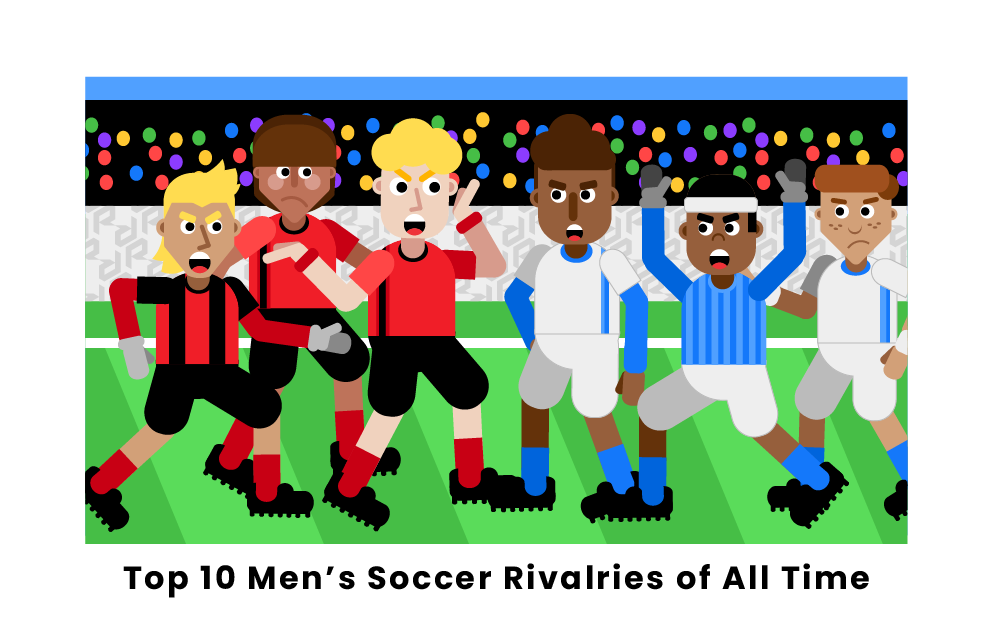 As the most widespread and timeless sport in the world, soccer has some of the most heated and long-standing rivalries in all of sports history. Whether rooted in political conflict or the strive for pure competitive excellence or, more often, both, games between familiar foes of soccer are the most followed and eagerly anticipated in the world.

What Are the Biggest Men’s Soccer Rivalries of All Time?

Games between Real and Barcelona are the most revered, eagerly anticipated, and hotly debated for good reason. Every year, El Clásico brings together the most star-studded and accomplished teams in the world, playing to a backdrop of the cultural rift between Spain’s most shining cities. Barcelona and Madrid represent Catalonian nationalism and Spanish nationalism, respectively, a divide that has been bone-deep in the country since the Spanish Civil War in 1936. This political backdrop has remained integral to the teams’ rivalry, although today their rift is fuelled more by pure athletic excellence, as Real and Barcelona have become the two single most accomplished and popular teams in the world.

The most contentious and high-stakes rivalry in all of England is easily the feud between Liverpool and Manchester United, the country’s two most skilled and accomplished teams in history. The start of the cities’ rivalry goes beyond sports, with Manchester having overtaken Liverpool as the country’s most successful port with the opening of the Manchester Ship Canal in 1894. Manchester and Liverpool would be in heated competition culturally and economically when their soccer clubs were created shortly after, leaving the field ripe for the thrilling rivalry that blossomed. While Manchester United has a slight edge on Liverpool in domestic Premier League wins, Liverpool has the edge in European championships abroad, fuelling debate on which of these accomplished teams is superior.

Every year, the Old Firm Derby between the Glasgow-based Celtics and Rangers represents a battle not just between soccer teams but of the cultural rift integral to Scottish history. The Celtics represent Catholics and nationalism to the Scots, while the Rangers are the Protestant team representing unionism. The divide between Catholics and Protestants has roots in English colonialism, which sought to impose Protestant beliefs on Catholic Scotland and Ireland in particular (not coincidentally, the Celtics enjoy wide support amongst Irish-Catholic fans as well). They are the two most popular and powerful teams in Scotland, having over 100 League titles between them. Their Glasgow Derby is a contentious and impassioned showdown every year, with millions watching worldwide.

Two of England’s oldest and most popular teams, Manchester City (nicknamed the blues for their uniform) and Manchester United (the reds), played their first match all the way back in 1881. Their evergreen, world-famous rivalry and the Manchester Derby as it’s known today took shape in the late 1960s and 1970s especially and would become followed by millions of soccer fans every year. While United has been the more decorated team over the years, Manchester City has always been unfailingly spirited and sometimes managed an upset, such as their 2002 defeat of United for the Premier League title.

Arsenal and Tottenham have been rivals since Arsenal moved just four miles away from the Tottenham stadium in North London, leading to a turf war and a number of heated derbies in the 1920s and beyond. Both teams are successful, but Arsenal (also nicknamed the Gunners) in particular has seen several top stars join its ranks and accolades mount up. In contrast, Tottenham has traditionally been the underdog in the North London derbies. Recent years, however, have seen Tottenham catch up to Arsenal’s formerly consistent winning streaks.

Boca versus River is easily the most hostile rivalry in Argentina, with a long, often ugly history between the two teams and their fanbases. Like many great rivalries, their contempt for one another is rooted in politics and class divisions. Boca is seen as the populist, scrappy team, and River Plate is seen as more educated and upper-crust. The crowds in attendance of their Superclasico game are known to be some of the most unruly and inclined to taunt, with many considering beating their rival equally important to winning championships.

Inter Milan and A.C. Milan face off every year in the highly anticipated Derby della Madonnina. Their rivalry originated from the rise of Italian nationalism in the early 1900s when the A.C. team adopted an Italian-only policy for its players, and the Inter team remained open to foreigners. The two Milan teams were prosperous and star-studded throughout the 20th century, with the 1960s featuring particularly exciting clashes between the two evenly-matched clubs. Today, relations between the teams and fans are friendly and celebratory, with a good-natured and competitive spirit.

The Borussia Dortmund and Bayern Munich rivalry is rooted in the pure competitiveness of two of Germany’s most elite teams. Though they first met in 1965, their true rivalry blossomed in the 90s when Dortmund grew to be a formidable opponent to the decorated and favored Bayern. Their fixtures would become known as Der Klassiker, watched by a wide audience in Germany and around the world. In a surprising upset in 1997, Dortmund would beat Bayern in the UEFA Championships League for the first time, which Bayern would reclaim the next year. The rivalry would reheat in many high-stakes matchups throughout the 2010s.

Although Real Madrid’s most noted rivalry is with Barcelona, its long-standing feud with Atletico, its close southern neighbor of Madrid, has its own exciting and emotional history. Many view their rivalry as a David and Goliath story, with Real as the wealthier, dominant team and Atletico as the working-class underdogs. In the years they’ve faced off since their first matchup in 1906, Real has overpowered and defeated Atletico at almost every turn, so much in fact that loss has become part of Atletico’s team identity as “the jinxed ones.” However, in a remarkable turn of events in 2013, Atletico beat Real in the Copa Del Rey Final, marking the first time they had defeated Real in 14 years.

It is widely disputed when the Inter vs. Juventus rivalry started, but the match that kicked it off was unforgettable. In 1961, the teams faced off in a ferociously competitive game. Inter initially won 2-0, until their triumph was overturned by the Italian soccer governing body (whose president was also head of the Juventus team) due to a technicality. The decision caused heated debate and accusations of bias amongst fans, which only grew worse when Juventus won the rematch 9-1. Soon after, the teams’ fixtures were dubbed Derby D’Italia, becoming a must-watch event in Italian soccer.

Originally, Club Deportivo Guadalajara (also known as Chivas) and Club América were not rivals but rather friendly competitors in the Mexican Primera Division, which later became the Liga MX. Their games were exciting but not bitter or competitive. That changed, however, with the purchase of Club América by Televisa in 1959. The media company changed the game of Mexican soccer by pouring money into Club América and encouraging competition. As a result of their new funds, Club América managed to hire a larger number of talented players from around the world, while Chivas set up an opposing philosophy, in which they drafted only Mexican players, preferring to make experts out of weaker talent rather than hire only the best. This division in worldview has led to an intense rivalry between the two teams, with Chivas fans viewing Club América as a “rich man’s club,” adding a flavor of class warfare to their matches.

The oldest derby in the Bundesliga, the rivalry between Borussia Dortmund and Schalke 04 dates from their first meeting in 1925. Both teams are based in the Ruhr region of North Rhine-Westphalia, Germany, which is the basis for their rivalry. The matchup between Dortmund and Schalke is known locally as the Revierderby and as the Ruhr derby internationally. This rivalry is fairly evenly matched, with both teams trading periods of dominance and enjoying occasions of recent success.

The rivalry between Porto and Sporting is one of the biggest in the Portuguese Primeira Liga. It started in 1922 when the two teams met in the Campeonato de Portugal, a predecessor to today’s Taça de Portugal, the Primeira Liga championship. Porto won the first meeting in a best-of-three series. The rivalry has been even since then, with the team’s records almost identical. Like many rivalries, this one is based on geography, with Porto representing the North of Portugal and Sporting the South.

What is the biggest soccer rivalry of all time?

As one of the most popular sports in the world, soccer has no shortage of dramatic rivalries, which are in contention for the biggest of all time. However, the long-standing conflict between Real Madrid and Barcelona is broadly considered the most compelling feud to date, with exceptional talent on each team and a complicated political history between the cities. El Clásico of the Madrid-Barcelona rivalry is the single most followed and anticipated soccer rivalry event.

What is the oldest soccer rivalry?

What is a derby in soccer?

The term derby can describe a match or the overall rivalry between two teams in close geographical proximity. One of the most famous is the Madrid Derby between Real Madrid and Atlético Madrid, which occupy northern and southern Madrid, respectively. In contrast, Real Madrid vs. Barcelona, also known as El Clásico, is not considered a derby because the teams are not in close proximity to each other.

Pages Related to Top 10 Men's Soccer Rivalries of All Time