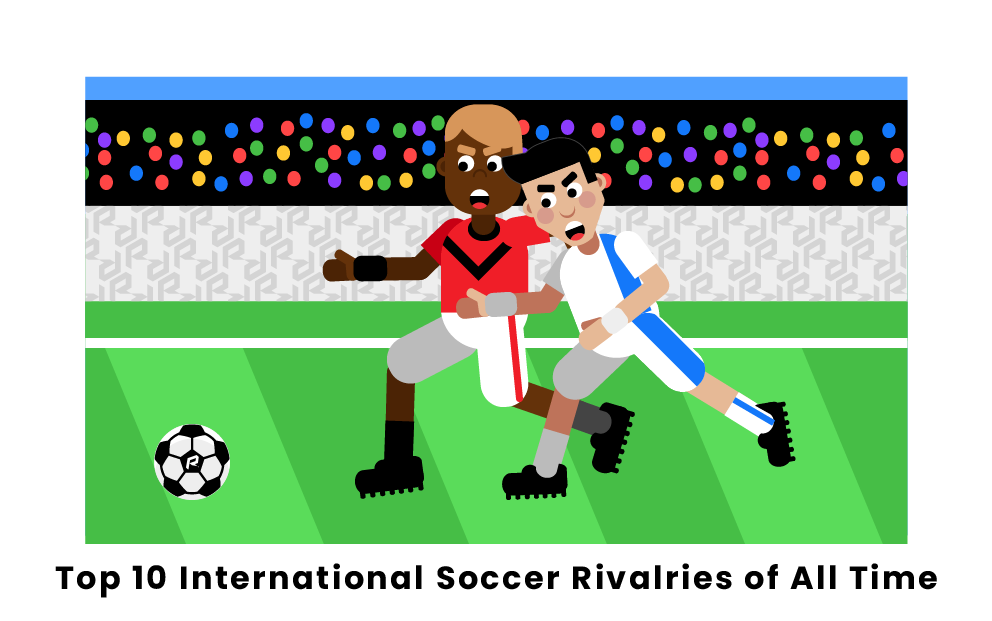 What Are the Biggest International Soccer Rivalries of All Time?

The rivalry between Argentina and Brazil is the fiercest rivalry in South America and might even be the fiercest rivalry in the world. Their rivalry is referred to as the “Battle of the Americas,” and ESPN has even described it as the essence of soccer rivalry. The two countries were bound to be rivals because they have always had political disputes and bad trading relationships. The teams played their first match against each other in 1914. Since then, they have played each other upwards of 100 times, with Argentina slightly holding the edge. The rivalry has greatly influenced their fans, and some even see soccer as their “religion.”

The soccer rivalry between England and Scotland is the oldest international soccer rivalry in existence. It all stems from the two teams sharing an island, Great Britain, and a nation, the United Kingdom. England and Scotland are also forefathers of the sport. Their first match dates back to 1872, the sport's first international game ever. Scotland fans describe England as the “Auld Enemy,” auld meaning old. This is because the two countries also have centuries worth of socio-political conflict in their history. Scotland's national anthem makes reference to this age-old rivalry.

The rivalry between France and Italy dates back to before their first match in 1910. The two countries have always had a love-hate relationship, not just in the realm of sports. They have a sort of jealous admiration for each other because they share the same love of food, wine, art, and soccer. Notable games between these rival teams include the 2006 World Cup Final when Italy defeated France 5-3 in a penalty shoot-out after a 1-1 draw, and the 2000 European Championship when France won with a goal in extra-time by David Trezeguet.

The rivalry between the US National Team and the Mexican National team stems from respect. This rivalry is called dos a cero, a Spanish phrase meaning two to zero, which refers to the final score of several Mexican losses in the rivalry. The two teams have fought for decades to hold the title of Kings of CONCACAF. There is a lot of passion that both teams put into the games they play against each other, making this one of the most intense rivalries in all of international soccer. The teams, however, have mutual respect for one another. The teams’ neighboring geographical location has also helped to fuel this rivalry. Their most important meeting ever was in 2002 at the World Cup in South Korea, in which the US infamously defeated Mexico 2-0. This remains their only ever meeting at a World Cup.

It is suspected that the rivalry between Germany and the Netherlands began after the 1974 World Cup Final when the Netherlands lost 2-1 to West Germany, but others say that this rivalry is due to a much deeper resentment that the Dutch have for Germany. Some say that this hatred is rooted in World War II, but others contest that this has nothing to do with their soccer rivalry. One of the most notable moments of this rivalry was during the 1990 World Cup Final when Dutch midfielder Frank Rijkaard spit on Germany’s Rudy Völler.

Denmark and Sweden's soccer teams first met in 1913. Their rivalry has escalated tremendously since then, especially since 1992 when Sweden won its first game at a European Championship and Denmark won the title that same year. For over 100 years, Denmark and Sweden faced each other in almost every major event in soccer, whether at the Nordic Cup or the European Championship. One of their more recent notable games was at the 2008 Euro Qualifier. During this match, a Danish fan ran out onto the field and tried to punch the referee. The referee abandoned the match shortly after, and Sweden was awarded the match. As a result, Denmark was sentenced to play its next two qualifying matches at least 140 kilometers away from Copenhagen.

Portugal and Spain are traditional rivals because they are neighboring countries. Also known as the “Iberian War,” the rivalry between Spain and Portugal is one of the oldest soccer rivalries, beginning in 1921. Although they mostly play friendly matches, they have played a handful of competitive matches against each other as well. This rivalry stems mostly from the countries’ history, with Portugal and Spain often finding themselves on different sides of wars and political conflicts.

Fans describe the rivalry between Japan and South Korea as a historic rivalry. Japan colonized South Korea for over 30 years, so this rivalry is about more than just soccer. The two teams have officially played each other since 1954. The matches between the two are often referred to as nikkansen (Japanese) or haniljeon (Korean). One of the most memorable moments between the two teams was during the 2012 London Olympics, when the South Korean team won the bronze medal for the first time, defeating Japan 2-0.

The rivalry between El Salvador and Honduras is very intense, and even allegedly started the 100-Hour War. These two neighboring countries in Central America have a history of border disputes. In the 1960s, their main conflict was the influx of Salvadoran migrants into Honduras. In 1969, El Salvador and Honduras were both fighting to compete in the 1970 FIFA World Cup. They had to play a three-match series, and the winner would advance to the World Cup. El Salvador won two of the three games and advanced to the World Cup. On the same day of the last match, diplomatic ties were cut between the two countries, and they were at war within a few weeks.

Algeria and Egypt are both located in North Africa, so their rivalry, like many others, is based on the region they are both located in. However, their rivalry heated up during the 2010 World Cup Finals, with the match ending in violence. Violence also broke out in Algiers, Algeria, because of news about Algerian supporters being attacked in Egypt during the match. There was also notable violence between the players, and the Egyptian team doctor lost an eye due to a broken bottle being thrown at him.

The rivalry between Croatia and Serbia has its roots in both shared culture and shared history. Between 1918 and 1991, Croatia and Serbia were both part of a united country, Yugoslavia. However, in 1991, the Croatians began a war for independence, and after years of fighting, the country of Croatia was formed in 1995, with what remained of Yugoslavia becoming Serbia. Some attribute the very start of the war to soccer itself, as a large riot between fans of the rival teams Red Star Belgrade and Dinamo Zagreb was considered to be one of the first salvos of violence in the Croatian War for Independence. The intense rivalries between Croatia and Serbia on the soccer pitch were only enhanced by the war, and they remain strong to this day. Though there is not always violence at Croatia-Serbia matches, the atmosphere is undoubtedly tense and evokes the bitter feuds left behind from the two countries’ not-too-distant war.

Iran and Saudi Arabia are two major Middle Eastern countries, and their struggle for dominance on the world stage often seeps into their soccer. The divide between the two nations is not only based on geographic separation, but also on racial and religious grounds, as Iran is a country largely comprised of Sunni Muslims, while Saudi Arabia is mostly Shia in populace. The two teams are known for frequently interfering with each other, such as when the Iranian football team was detained at length in a Saudi Arabian airport, presumably as an attempt to hinder their ability to play. Back-and-forth barbs like this characterize this bitter rivalry, and recently, Saudi Arabia has had the edge, though most consider the two teams to be evenly-matched.

Like many of the feuds on this list, the rivalry between Chile and Peru is based on the political conflict between the two nations. Since the 1800s, the two countries have engaged in war and various border disputes. Football hooliganism intensified the rivalry in the 1980s, leading to the raucous crowds always found at the Clásico del Pacífico, or Pacific Derby, a reference to their neighboring locations on the Pacific Coast. Chile won the first of the 83 matches the teams have played to date, and they hold the edge in victories, with 46.

What is the biggest international soccer rivalry?

What is the oldest international soccer rivalry?

The oldest international soccer rivalry is the rivalry between England and Scotland. Both countries are forefathers of the sport, and their first match was in 1872. This was soccer’s first-ever international game. Scotland’s fans even describe England as “the old enemy,” further showing that they have been rivals for a very long time.

Pages Related to Top 10 International Soccer Rivalries of All Time