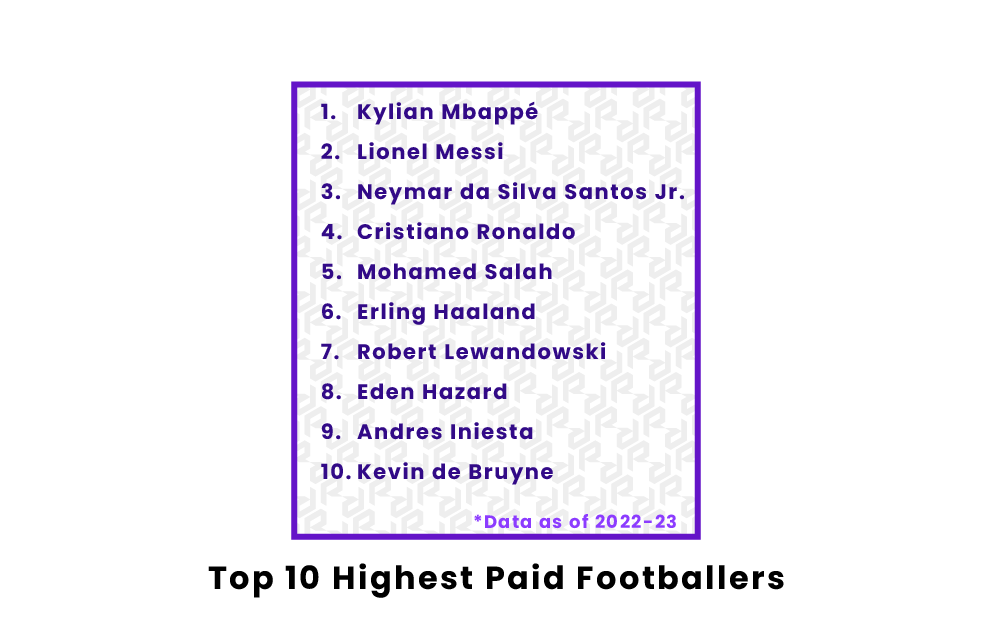 In the world of professional soccer, the top names in the sport are able to command extremely large salaries. Soccer clubs are often willing to shell out millions to secure the most talented and reliable players, even stealing them from other teams. Listed below are the ten highest paid soccer players in the world in terms of current annual salaries.

Who are the highest paid footballers in the world?

Kylian Mbappé is currently the highest paid footballer in the world, reportedly earning $110 million every year in salary. Mbappé is undoubtedly an upcoming star in an exciting new generation of soccer players. He plays for one of the best teams in the world, Paris St. Germain, which is a member of France’s top soccer league. They’re also one of the most willing teams to shell out the big bucks for premier talent.

Lionel Messi is the second-highest paid footballer in the world, earning $65 million every year in salary from Paris St. Germain (PSG) Football Club. Even though his career is far from over, many are already calling Messi one of the greatest footballers of all time. His legendary career at FC Barcelona saw him score 474 goals between 2004 and 2021. He also has scored 90 goals with the Argentinian national team, some of which have been truly legendary moments in the FIFA World Cup.

Neymar da Silva Santos Júnior, better known as just Neymar Jr., makes a reported $55 million per year playing for Paris St. Germain (PSG). Again, Neymar Jr. is also a member of the PSG squad that rosters other superstars like Messi and Mbappé. Neymar is similarly one of the most iconic names in the whole sport, thanks to his legendary efforts, such as 175 goals between Santos FC and Barcelona. He’s also well-known for his heroics with the Brazilian national team.

Making $40 million per year playing for Manchester United, Cristiano Ronaldo is the fourth-highest paid soccer player in the world. The name Cristiano Ronaldo is instantly recognizable, and for good reason. Ronaldo spent the better part of a decade with the legendary Spanish football club, Real Madrid, where he scored 311 goals over the course of nearly a decade. Similarly, he’s scored 117 total goals with the Portuguese national team. Ronaldo currently plays for Manchester United, which he returns to after playing for them between 2003 and 2009.

As a member of the Liverpool Football Club, Mohamed Salah annually earns $35 million. Since signing with Liverpool in 2017, Salah has been practically unstoppable and has scored a whopping 121 goals with the team. As a result of his effort in the 2021-2022 season, Salah was awarded the Golden Boot Award, which recognizes the player who scored the most goals in the entire premier league. Salah finished with 23 goals in Premier League play that season, plus another eight in Champions league play.

With the Manchester City Football Club, Erling Haaland makes the same as Mohamed Salah, $35 million per year in salary. Haaland plays striker for the club and has scored 17 goals in only 11 appearances since debuting at the start of the 2022 season. Prior to signing with Manchester City, Erling Haaland played for Borussia Dortmund between 2020 and 2022, a period in which he somehow managed to score 62 goals. He had only 67 appearances in those seasons.

As a member of FC Barcelona, Robert Lewandowski earns $27 million annually in salary. As one of the most successful teams in Europe, Barcelona is willing to spend large sums of money on maintaining their relevance, and Lewandowski was well worth such a large contract. With the Bayern Munich club, Lewandowski scored 238 goals in 253 appearances. And in 2021, he finished second in Ballon d’Or voting, which is an award given to the best footballer in the world that year. Thus far into his Barcelona career, he has scored 13 times in 12 appearances.

Tied with Lewandowski, Eden Hazard earns $27 million each year from his salary with Real Madrid. Similar to Paris St. Germain, Real Madrid has been known to give high-paying salaries to acquire some of the world’s most-deserving soccer talents. Eden Hazard is one of those players, considering he scored 85 goals when he played for the Chelsea Football Club between 2012 and 2019. Since signing with Real Madrid in 2019, Hazard has unfortunately only managed to find the net four times in 51 appearances.

Andres Iniesta is paid $25 million per year as a player for the Vissel Kobe soccer team in Japan. Iniesta is one of the premier veteran players in the entire world, having played for Barcelona since 2002 and then switching to Vissel Kobe in 2018. Iniesta is a midfielder and has managed to score 56 goals since his debut with Barcelona in 2002. Iniesta is a native of Spain and, like many other players on this list, helped the Spanish national team for many years.

Also with a salary of $25 million per year, Kevin de Bruyne ties with Iniesta for the ninth highest paid footballer in the world. Kevin de Bruyne currently plays for Manchester City, who pay him handsomely for his strong skills in the midfielder position. Since he made his debut in 2015, de Bruyne has managed to score 59 goals over 218 appearances with the team. He has also been twice awarded the Premier League Playmaker of the Year award.

Who is the highest paid footballer in the world?

The highest paid footballer in the world is Kylian Mbappé. Mbappé is a native of Paris, France, and also happens to play for Paris St. Germain (PSG), one of the premier football clubs in the entire world. As a forward, PSG pays Mbappé such a large salary for his incredible footwork and aggressive style. These skills have so far yielded him 116 goals in 126 appearances for the Paris-based football club.