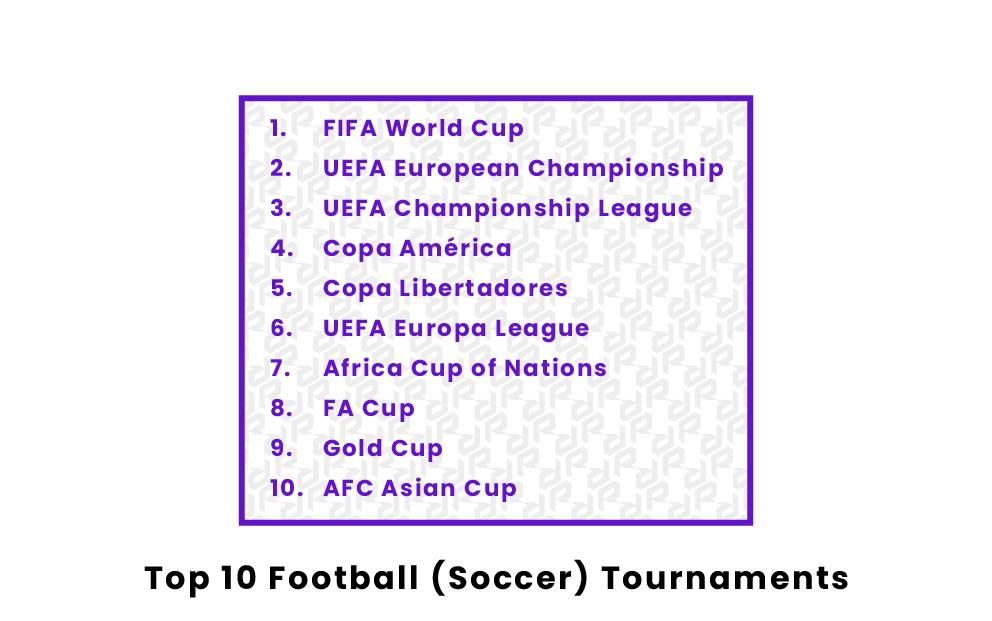 Soccer is one of the most popular and exciting sports in the world. Each year, there are different tournaments hosted in each continent that pair the best clubs and national teams against each other. While there are many different soccer tournaments due to the sport’s global presence, ten soccer competitions stick out as the largest in the world.

What Are The Biggest Football (Soccer) Tournaments in the World?

The UEFA European Championship, commonly known as the Euro, is Europe’s regional international soccer tournament. Played every four years, 55 European national teams compete to qualify for a spot in the UEFA European Championship’s 24-team competition. The UEFA Euro started in 1958, and the most successful teams throughout the competition’s existence are Germany and Spain, both of which are tied with three Euro wins. In the 2020 UEFA Euro, a whopping 5.2 billion people cumulatively tuned in throughout the tournament’s run.

Similar to the UEFA Champions League, the Copa Libertadores is South America’s international club competition and is played by each country’s domestic champion club. The Copa Libertadores was founded in 1960 and is played by clubs from countries that are part of CONMEBOL, the continent’s international soccer governing body. Currently, the most successful club in the tournament’s existence is the Argentinian team Indipendiente, with a total of seven tournament wins. The most recent tournament winner is Brazil’s Palmeiras.

The UEFA Europa League, commonly referred to as the Europa, is Europe’s second-most prestigious club soccer tournament. The Europa League is the second-highest level of European soccer, pitting top domestic teams that did not qualify for the UEFA Champions League against each other. The UEFA Europa is played every year throughout the fall, winter, and spring. The most successful club throughout Europa's existence is the Spanish team Sevilla, holding six tournament trophies. The runner-up is Atlético de Madrid, another Spanish team, which has won three trophies.

The FA Cup is England's domestic soccer tournament that is held every year. Every season, hundreds of teams across England attempt to qualify for the tournament. While every club from the Premier League (England’s most prestigious soccer league), the EFL Championship, EFL League One, and EFL League Two automatically qualify for the knockout tournament, lower-league teams must compete to qualify. The FA Cup is unique because it includes a large range of talent, ranging from the best soccer teams in England to low-level regional teams. The first FA Cup was held in 1887.

The CONCACAF Gold Cup is an international soccer tournament that is played by members of CONCACAF, the international soccer governing body for North America, Central America, and the Caribbean. Every two years, 15 national teams from the region participate to prove their skills on the international level. The most successful team in the Gold Cup’s history is Mexico, with eight wins. The United States is the runner-up, holding seven trophies.

The AFC Asian Cup is held every four years and is Asia’s international soccer tournament. Originally made up of the founding 12 member states of AFC, the tournament now includes 24 of the continent’s best national teams out of the 47 eligible member associations of AFC. The tournament was founded in 1956, and the most successful national team to date is Japan, holding four titles.

What is the biggest football (soccer) tournament in the world?