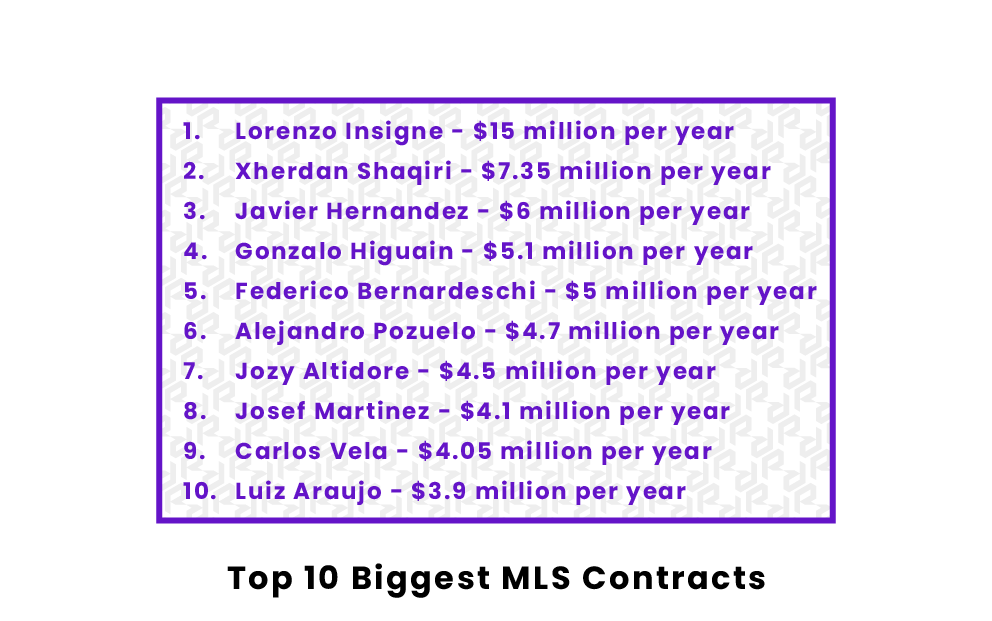 In recent years, the MLS has gained increased notoriety as the league attracts soccer talent from all across the world. With this rise in skill and fame, certain MLS stars have negotiated contracts with their clubs that have shattered previous contract records. Listed below are the top ten biggest MLS contracts of all time.

What are the biggest MLS contracts of all time?

Lorenzo Insigne has by far the largest MLS contract, earning himself a whopping $15 million per year. The Italian left midfielder joined the MLS club Toronto FC in July of 2022 after building his career in Italy. Insigne grew up playing for the Italian giant SSC Napoli in their youth academy, eventually making his way up to the first team. After being loaned out to other Italian soccer clubs, Insigne eventually returned to SSC Napoli in 2012, where he played there until his move in 2022 to the MLS.

Xherdan Shaqiri has the second-largest contract in the MLS, coming in at $7.35 million per year. The 30-year-old right midfielder from Switzerland honed his skills while playing for the FC Basel youth and U21 teams. After becoming a standout, Shaqiri signed with FC Basel’s first team in 2009, remaining at the Swiss club until 2012. Xherdan Shaqiri has also played for massive clubs such as Bayern Munich, Liverpool FC, and Inter Milan, eventually signing with Chicago Fire and making his move to the MLS in 2022.

Javier “Chicharito” Hernandez has the third biggest contract in the MLS to date, earning $6 million each year. The Mexican center forward made a name for himself playing soccer in Europe, playing for club giants such as Manchester United, Real Madrid, West Ham, Sevilla, and even Bayern Leverkusen. In January of 2020, Chicharito made his move to the MLS, going on to play for LA Galaxy. Javier Hernandez is a fan favorite in the MLS and remains also liked all across Europe, especially by his former Manchester United fans.

Gonzalo Higuain has the fourth-largest contract in the MLS, earning $5.1 million per year. Higuain is one of the league’s most well-known players, having built his career in Europe. The Argentine center forward started for Real Madrid from 2007 to 2013, eventually moving to play for clubs in the Serie A. Higuain even had a loan stint with English giants Chelsea at one point. In 2020, Gonzalo Higuain made his move to the MLS, where he was bought by Inter Miami, a young club quickly making a name for itself.

The MLS player with the fifth largest contract is Federico Bernardeschi, earning $5 million per year. The Italian right midfielder grew up playing for the Italian club Fiorentina’s youth squads, making his way to the first team in 2013. In July of 2022, Bernardeschi moved from his former club, Juventus, to Toronto FC, becoming one of the Canadian club’s most prominent players.

Alejandro Pozuelo has the sixth-largest contract in the MLS, making $4.7 million a year. Born in Sevilla, Spain, the 31-year-old midfielder began his career playing for the Real Betis U19 team, eventually signing with the club’s first team in 2013. Pozuelo was transferred to Swansea, a club from Wales, in 2014, and then eventually onto Rayo Vallecano and KRC Genk. In 2019, Pozuelo made his move to the United States, signing with Toronto FC. Three years later, the midfielder transferred to Inter Miami, where he currently plays alongside Gonzalo Higuain.

Jozy Altidore ranks seventh on the list of the players with the biggest MLS contract, earning $4.5 million per year. Born in the United States, Altidore is the highest-paid American soccer player in the MLS and has even started for the U.S. national team. Altidore began his professional career playing for the New York Red Bulls in 2008, eventually making his way to Europe to play for Villareal in Spain. After stints with Xerez CD, Hull City, Bursaspor, AZ Alkmaar, and Sunderland, the center forward returned to the MLS playing for Toronto FC. Currently, Altidore is on loan from New England Revolution to Puebla FC in the Mexican League.

Josef Martinez has the eighth-highest MLS contract, earning himself $4.1 million per year. Martinez began his career in his home country, playing for Caracas FC’s U20 team. Following his successful youth career, he was brought up to Caracas FC’s first team, eventually transferring to Europe to play with BSC Young Boys, a Swiss club. The Venezuelan center forward currently plays for Atlanta United FC after a series of loans between the Italian club Torino and Atlanta United.

Making $4.05 million per year, Carlos Vela takes the ninth spot for the largest MLS contracts. Carlos Velas grew up in Mexico, playing for Guadalajara’s U20 team. In 2006, Vela was signed by English giant Arsenal. Following his move to the Premier League, the right midfielder moved to La Liga, playing for Celta de Vigo. After more loans from Arsenal, Vela was eventually bought by Real Sociedad and was eventually sold to the MLS club Los Angeles FC in 2018.

Luiz Araujo holds the tenth spot on the list, earning $3.9 million per year. The Brazilian right winger moved to the MLS club Atlanta United FC in 2019 after playing for the French club LOSC Lille. Originally, Araujo honed his abilities while playing for Sao Paulo’s youth teams. After a series of loans to other Brazilian teams, Araujo was bought by LOSC Lille in 2017, staying with the club until his 2021 move to the MLS.

Who has the biggest MLS contract currently?

Currently, the MLS player with the biggest contract is Lorenzo Insigne. The Italian midfielder transferred to Toronto FC in July of 2022 and earns a whopping $15 million per year, more than double the runner up, Xherdan Shaqiri, who makes $7.35 million per year. Lorenzo Insigne honed his talent while playing for SSC Napoli’s youth team. Following a series of loan agreements with other Italian clubs, Insigne made his move to the United States in 2022.

Who has the biggest MLS contract of all time?

The soccer player with the biggest MLS contract of all time is Lorenzo Insigne. Insigne signed for Toronto FC in July of 2022, agreeing to a contract of $15 million per year. After SSC Napoli’s youth academy, Insigne made a name for himself in Serie A. Rather than leaving the Italian league for another major European club, Lorenzo Insigne opted to move to Canada to join the MLS side Toronto FC, becoming the highest-paid MLS player of all time.