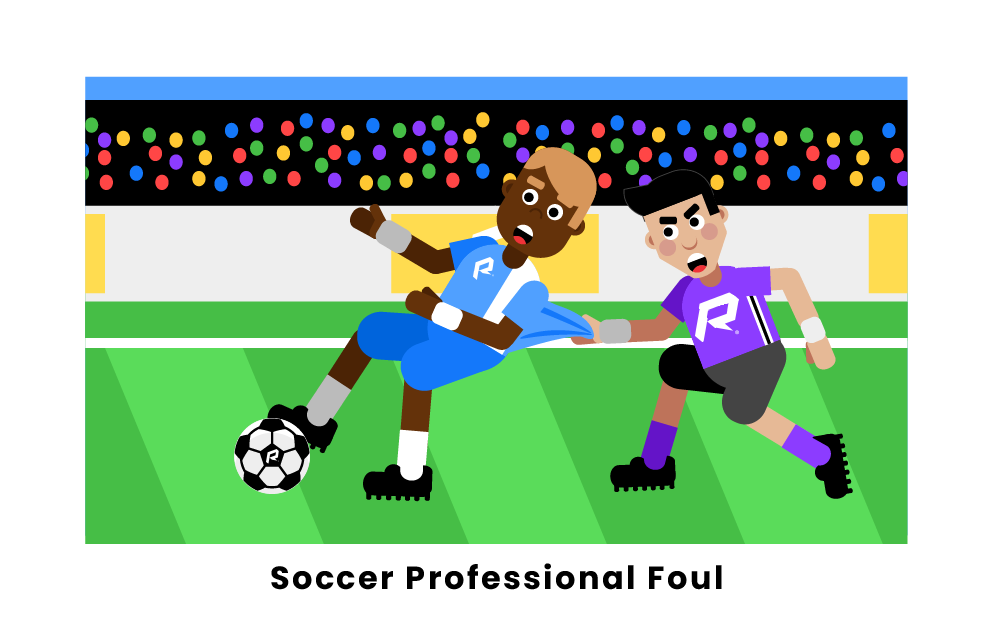 A tactical foul is committed when a player deliberately fouls another. This typically takes place as a strategy to prevent lethal counter-attacks or when an opponent has time and open space to go for the goal. In more serious cases, it can be a yellow card or red card offense.

A tactical foul in soccer, also called a professional foul, occurs when a player intentionally fouls another. It is done for strategic purposes and is particularly common for teams on the front foot who keep plenty of possession.

This offense often occurs in various situations, such as when a team gives up possession deep in their opposition’s territory and wants to prevent a quick and potentially dangerous counter-attack. A player will take down their opponent, giving time for their defense to regroup and organize.

Another example includes taking down an opponent that is one-on-one with their goalkeeper or in a likely goal-scoring opportunity. In this case, conceding a potential free kick is less threatening than a one-on-one opportunity.

When a tactical foul occurs, the referee will halt play, penalize the offender, and give a free kick or penalty kick (if committed in the penalty box). A tactical foul can be worthy of a yellow card, red card, or no card at all, depending on the situation it occurs in. For example, if a foul is committed to prevent an opponent from starting a counter-attack, the player who committed the foul may receive a yellow card.

Alternatively, they may be given a red card if a player fouls an opponent considered the “last man,” whether one-on-one with a goalkeeper or with a clear goal-scoring opportunity. When giving out a card, the referee will stand in front of the offender and hold the card up for all to see.

Additionally, a referee may call for a “play-on” to signal advantage, should possession be retained by the team who got fouled, and the foul will be assessed at the next stoppage of play.

Similar Fouls to a Tactical Foul

What is a tactical foul in soccer?

A tactical foul in soccer, also known as a professional foul, occurs when a player deliberately fouls another in order to prevent potential goal-scoring opportunities or counter-attacks. It is commonly practiced by teams who maintain high possession and play deep in opposition territory, as they are often vulnerable to counter-attacks. Often, a defender would prefer to give up a free kick rather than allow a one-on-one situation with their goalkeeper.

What are the consequences of being called for a tactical foul in soccer?

Tactical fouls can result in yellow cards or red cards, depending on the situation. The severity of the penalty depends on where and how the foul was committed. For example, if a player who has a clear one-on-one opportunity with the goalkeeper is tactically fouled, the player who committed the foul may be given a red card. However, if a teammate (of the player who got fouled) keeps possession of the ball, the referee may call for a “play-on” to signal advantage and penalize the offender later.

Is a tactical foul always a red card?

A tactical foul is not always a red card. In fact, it is only a red card in severe circumstances, such as when a referee deems it appropriate after a violation of the “last man” rule or when the attacker has a one-on-one with the goalie. Tactical fouls are usually a cautionable offense, also known as a yellow card.