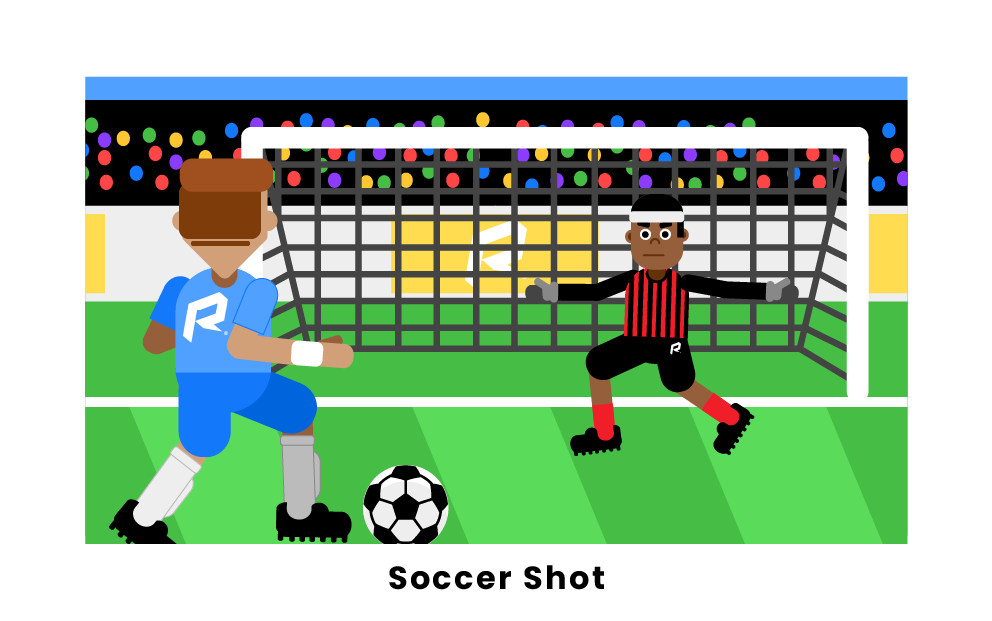 Not every goal looks the same in soccer, and that's because there are several different shot types a player can use to score. Shooting is when a player kicks the ball with the intention of scoring. Read on to learn about the different types of shots in soccer.

What are the different types of shots in soccer?

A bending shot is a shot that curves. Bending shots are used to confuse the goalkeeper and to get around defenders. Executing a bending shot is simple, all you need to do is kick the ball with either the inside or outside or your foot, and kick down on the ball at an angle. The amount of force applied at the angle will determine how much the shot bends.

Bicycle shots are extremely difficult shots in which a player leans backward with their back to the goal before kicking the ball in hope of putting it in the net. These shots are extremely rare, and make for quite the spectacle when successful. Additionally, due to the acrobatic nature of these shots, players only really attempt them when they have a good deal of open space around them.

These types of shots also require the ball to be elevated to about head level, so it takes a very specific scenario for an attempted bicycle kick to make sense.

A chip is when a player, attacking near the goal, chooses to loft the ball with the attempt of getting over the goalkeeper. This will reduce the power of the shot, making it easier for the goalkeeper to deflect or stop if they can make contact with it.

Chips are typically used when a goalkeeper is off their line or on the ground as they are not in a position to save it.

A dummy shot is a move wherein the attacking player moves their body in a way that looks like they will shoot or pass in a certain direction, only to do another action or shoot/pass in a different direction.

A dummy is used to trick a defender in order to create space or draw helping defenders away from the attackers they were marking.

A header is a type of shot in soccer in which a player redirects the ball with their head in an attempt to score a goal. These types of shots require precise passing from a teammate, and usually take place on corner kicks, free kicks, or cross passes. Typically, these types of shots are most effective when taken by taller players who can rise above defenders to make contact with the ball. They are becoming less common and some even argue that their practice will soon be stopped altogether, except by accident.

A Panenka is a soft, lofted kick mostly taken in a penalty shot, down the middle of goal, executed by kicking underneath the center of the ball. Panenkas are often seen as a confident shot that requires perfect execution and exact technique. Like the bicycle kick, they are not very common for these reasons but are heavily publicized when successfully done.

As the name would suggest, the standard shot is the most common type of shot in soccer. A standard shot will have some curve or movement to it while also having enough force to blow by a keeper. This shot is performed by using the area between the inside of your foot and the top of your foot. You will want to kick down on the ball at an angle while swinging your leg across your body upon contact.

A straight shot is slightly similar to a standard shot, except that it emphasizes more power. This type of shot is meant to be kicked with the top of the foot and often produces a low, piercing ball. This shot can be beneficial when you need to shoot the ball before the defense can react.

In some situations, if the ball is not already on your kicking side, using a touch to get into position for a standard shot may take too long. Approaching the ball head on and cracking it at the net can sometimes be the best option, even if it sacrifices some accuracy.

The rabona is a crafty type of shot in which a player crosses their kicking leg behind their other leg before making contact with the ball. Due to the motion of crossing one’s kicking leg behind the other this shot lacks power, however it is used in an attempt to deceive or confuse the goalkeeper and score. These shots are very rare, and take plenty of practice to pull off successfully.

A volley is a soccer shot in which the shooter kicks the ball out of midair. Volleys are shots on the first touch, meaning players do not control or dribble the ball before shooting it. They are most often attempted when a teammate crosses the ball into the box that is too low for a header.

What type of shot is used during a penalty kick?

The most common type of shot used during a penalty kick is the standard shot. With no defense other than the goalie, standard shots have the most optimal combination of power and accuracy. However, some players tend to get particularly crafty when attempting penalty kicks, and the possibilities for how a player can take a penalty are endless.

What is a first time shot?

A first time shot, also known as a one-timer, is when a player shoots the ball immediately upon receiving a pass from a teammate. This type of shot is best used when time is of the essence and taking a touch before shooting would be detrimental to your chances of scoring. This is often seen when a player receives a cross in the box or when defenders are quickly closing in on an attacker. While first time shots can catch the defense off guard and prevent them from setting up properly, it often results in poor accuracy.

What is a shot in soccer?

A shot in soccer is any form of attempt to score a goal. Typically shots are taken via a player’s kicks, however players can also score with their heads or legs if given the opportunity. Shots are divided into “shots on target,” in which the shots either go in the net or would have gone in if not for the defense, and “shots off target,” in which a player’s shot misses the net entirely.