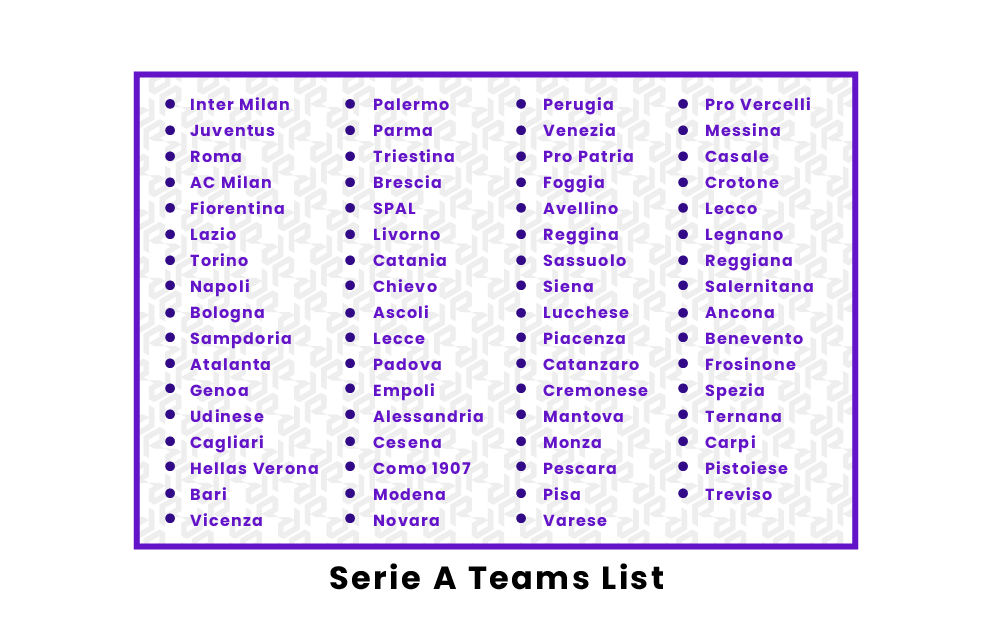 Serie A is a professional soccer league located in Italy. It is the top soccer league in the Italian Football System. The Italian Football System uses promotion-relegation for its leagues, so every year, the bottom three teams are sent down to the second division, Serie B. Conversely, the top three teams from Serie B come up to Serie A. Below is a list of all of the teams that have participated in Serie A over the years, with the 2022 teams bolded.

What are the teams in Serie A?

What is the oldest Serie A team?

What team has won the most Serie A titles?

Juventus has won the most Serie A titles, with 36 league championships since their first title in 1905. This is by far the most in Serie A history. Inter Milan and AC Milan are tied for the second most titles with 19 each. In addition to their 36 titles, Juventus has finished in second place 21 times, meaning they have finished in the top two in Serie A 57 times.

When was Serie A founded?

The first official season of Serie A was the 1929-30 season. Professional soccer first began being played in Italy in 1898, but prior to 1930, Italian soccer was broken up regionally, with teams competing in separate leagues across the country. Starting in the 1920s, the leagues slowly began to merge until Serie A was officially created for the 1929-30 season. Originally, there were eighteen clubs in the league, but that number has varied throughout history. Currently, there are twenty teams in the league.