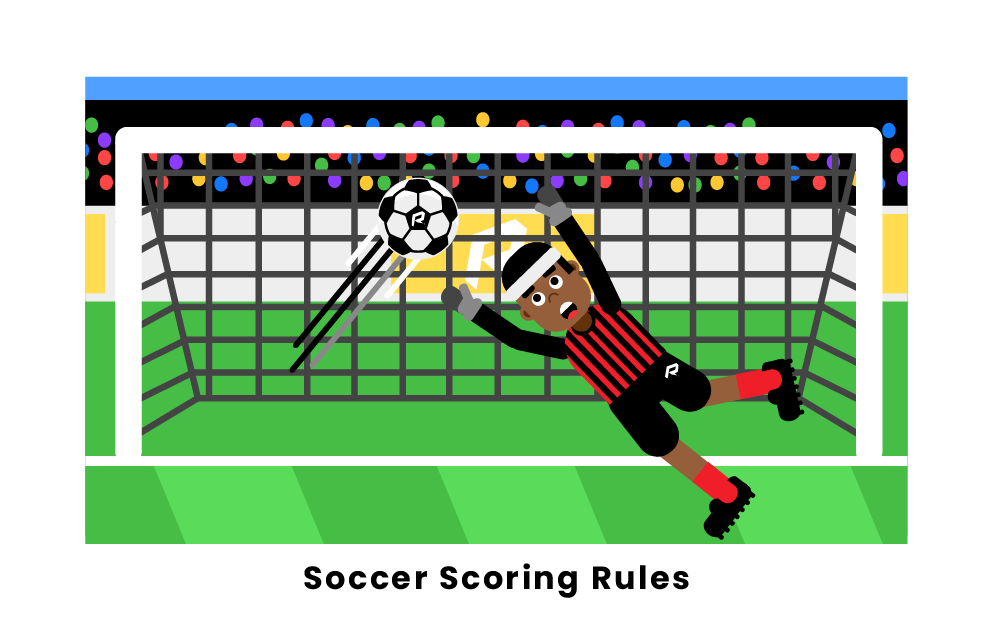 Soccer is a sport played by all ages that has garnered worldwide popularity. The rules of soccer, also known as association football, are relatively simple. Read on to learn more about scoring goals in soccer.

What Is a Goal in Soccer?

In the sport of soccer, teams work together to score goals to win the game. A goal is scored when the ball fully crosses the goal line between the goalposts and under the crossbar. A goal is worth one point in a soccer match, regardless of where it is scored.

The goal lines are the shorter of the boundary lines where the goals are positioned that form the perimeter of the field. The goalkeeper protects this line because a goal is scored if a ball completely crosses this line and goes into the goal.

Who Can Score in Soccer?

A goal is one of the most exciting parts of any match, and it can be scored in a variety of ways. Unique goal celebrations composed by players make goals all the more enjoyable.

Anyone can score a goal, regardless of position. Typically, offensive players, known as strikers, score the most. It’s much less common, but midfielders, defenders, and even goalkeepers can also score.

The team on offense is in possession of the ball and can attempt to score by taking a shot, which is simply the act of kicking or heading (hitting the ball with the head) the ball in the direction of the goal. If a single player scores three goals in a single match, this is known as a hat trick.

What Is Aggregate Scoring?

Aggregate scoring is the total number of goals scored by a team in a series of two or more games played. In multi-legged tournaments, aggregate scoring determines which team moves on if both teams have the same number of wins and losses.

Usually, aggregate scoring is used in tournaments that feature stages with two legs, which means two teams may play each other twice to determine a winner, with one match at home and the other away. The combined score of the two matches is the aggregate score, with the team with the higher number of goals moving on to the next stage.

If the overall aggregate score is tied after the games are completed, there are two primary methods of deciding a winner. In some cases, tournaments determine the winner of a tiebreaker based on which team scored the most goals in away matches. This is known as the away goals rule. For example, Teams A and B played twice. Team A won at home 1-0, and Team B won at home 2-1. While the overall aggregate score is 2-2, Team A scored more goals  while playing away and, therefore would advance.

Alternatively, if the away goals rule is not being used, the last match goes to extra time and, if still tied, to a penalty shootout. In a penalty shootout, each team has five shots on goal from penalty kick distance to score the most goals.

How is the Winning Team Determined if the Score is Tied After Regulation Time?

Most soccer matches end in a draw if the score is tied at the end of regulation. If the match is part of a tournament that requires a winner to be determined, a match winner is decided in one of three ways:

How Does Scoring Work at the World Cup?

During the group stage of the FIFA World Cup, aggregate scoring is used to break ties between teams that had the same number of points after their three group matches. Teams receive three points for a win, one point for a tie, and zero points for a loss. The team with the most cumulative points advances as the winner of their group, and the runner-up also advances. If there are ties, then goal differential is used to determine the final standings, followed by goals scored and then a head-to-head competition.

This group stage scoring is the same system used in Olympic soccer.

Here are some concepts that are related to scoring rules in soccer:

What is a scoreline in soccer?

A scoreline lists the result of a match and the goal totals of each team, with each goal listed featuring the name of the player who scored it and the time the goal was scored. After a goal is scored, a point is added to the scoring team's total, and the team with the higher score at the end of the match wins. Fans checking the results of past matches are looking for scorelines. Scorelines can be used for a single game or represent the current standing in an aggregate match.

What is “offsides” in soccer?

Offside is an infraction of the rules of soccer that regulates offensive possessions and can have an extreme impact on a scoring push. In short, no offensive players can receive a pass if they are closer to the opposing goal than the defender standing farthest back on the pitch. This does not include the goalkeeper. The decision regarding whether or not a player is offside is measured at the moment a player’s teammate passes them the ball, not when they receive that pass. If a player is found to be offside, their team loses possession of the ball, and their opponent is given a free kick. This rule is not applicable when an offensive player is on their own half of the pitch or receiving a throw-in.

What is VAR in soccer?

What happens if you score in your own net?

Surprisingly, scoring on your own net can occasionally happen in soccer, even at the professional level. If the ball is last touched by a defensive player before crossing into his own team’s goal, it's credited as an own goal. The goal counts, and the opposing team will still receive a point, just the same as any other goal scored.