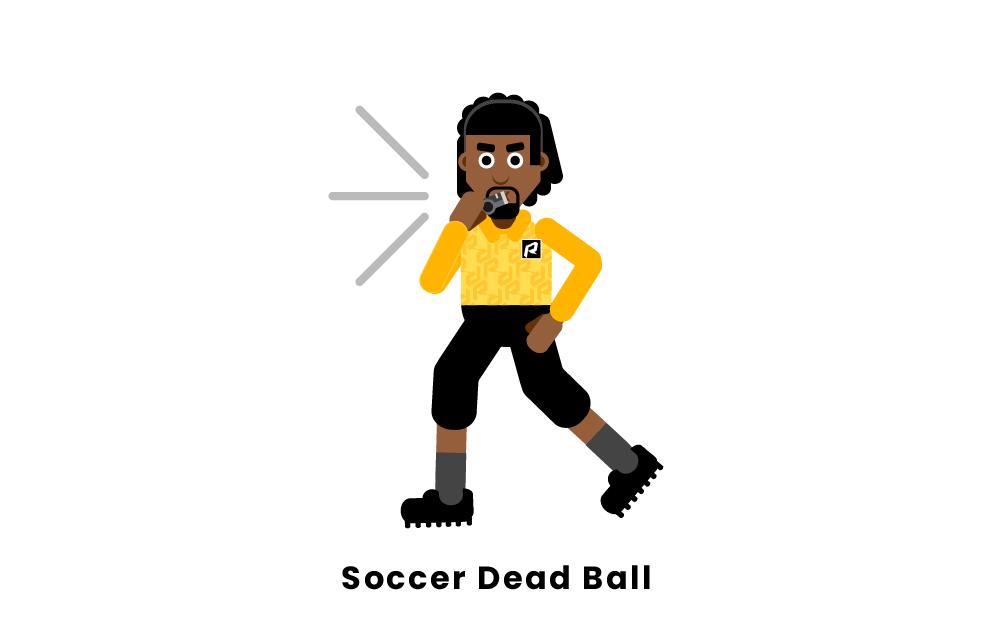 Although soccer is a very fast-paced sport with a running clock, there are many instances where the gameplay is temporarily stopped. This is a situation called a dead ball. Let’s talk about what constitutes a dead ball in a soccer match.

What is a dead ball in soccer?

A dead ball in soccer is a situation when gameplay is stopped, and the ball is not involved in live play. This is the time before the ball is put back into play. Dead balls can happen for multiple reasons, and players must follow the proper procedures for restarting play once the ball is dead.

The most common time when a dead ball happens is when the ball is kicked out of bounds and is no longer in play. There are one of three options to restart gameplay when the ball goes out of bounds, depending on the location it goes out at and which team touched it last. These are throw-ins, goal kicks, and corner kicks. Once the ball crosses in bounds and is played by a player, the gameplay continues until another dead ball is declared.

The referee will also blow their whistle and declare the ball dead when there is a foul. This is very common in soccer as well. Players must stop and obey the official’s call before the game restarts. For a dead ball that resulted from a foul, play is restarted with a free kick or penalty kick, depending on the location of the foul.

Dead balls also happen for substitutions and injuries in soccer. Play can be restarted in multiple ways, depending on where the ball was located when it was ruled dead.

What do players do when there is a dead ball?

The most common thing for players to do when there is a dead ball while on the field is to stop moving entirely. This is especially common for injuries on the field, where players typically take a knee.

For other instances like set pieces (throw-ins, free kicks, corner kicks), players do not stand still on the field. Instead, they position themselves for the ball to be put back into play and try to gain an advantage for their team.

Players are often trying to avoid defenders and are moving around on the field for throw-ins. For corner kicks and goal kicks, players are usually paying attention to the kicker and do not run until contact with the ball is made. For free kicks, the defending team may create a wall in front of the kicker, while the kicker’s teammates prepare to receive a pass or crash the goal on a shot.

When is the ball dead in a penalty shootout?

In a penalty shootout, the ball is dead after the kick has been taken and the ball has stopped moving. Most importantly, this means that the kick taker and their teammates cannot rebound a blocked or missed kick in an attempt to score. However, in a standard penalty shot during the game, the ball is live immediately after the shot and can be played by the players.

Is the ball dead on a substitution?

When a team makes a substitution, the ball is considered dead. The game restarts after a player makes contact with the ball in bounds, whether that be through a throw-in, corner kick, or goal kick. When an injury occurs on the field, the official will signal that the gameplay is stopped and the ball is dead.

When is a dead ball called?

A dead ball is called whenever certain fouls or penalties occur. First, if the ball goes out of bounds, it is considered dead. If there is a foul on the field, the ball will be dead once the referee blows their whistle to signal the foul call. Injuries and substitutions are also dead ball situations.

Does the game clock tick on a dead ball?

Regardless of the ball being declared dead, the game clock never stops ticking. Instead, time will be added to the end of each half to make up for wasted time during dead ball situations; this is referred to as stoppage time.