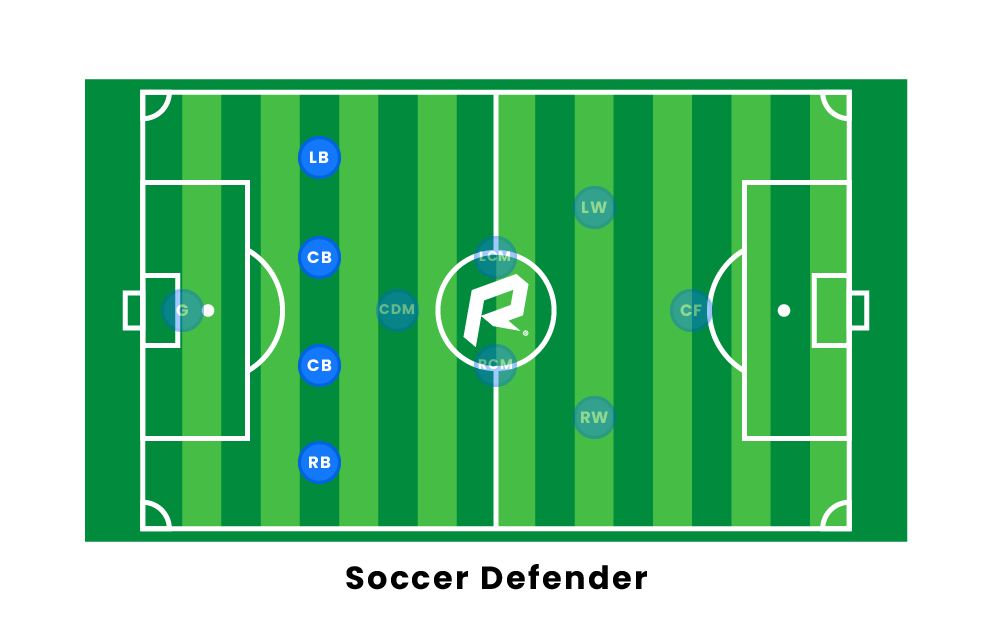 What are Defenders in Soccer?

The defenders are a group of players responsible for guarding their team’s goal and preventing the opposing team from scoring. While it may not be as glamorous, defensive soccer is just as important to a team's success as offense.

The defender's jobs on the pitch will change depending on the location of the ball on the pitch and the defensive strategy being used. However, a defender's core jobs are to:

Defenders do exactly what you think they would do, play defense. They play close to their team's own goal, attempting to thwart the opposition's attack. They typically play in a straight line parallel to the endline or form a diamond formation with a sweeper in the most backward position.

In order to stop the opposing team’s attack, defenders primarily need immense speed and physicality. This is because they need to be able to match the pace of opposing team members as they run down the field and must be strong enough to take the ball away from opponents.

Lastly, a defender should be coordinated so that they are capable of tackling an opponent at the right time. Slide tackles in particular are a popular way for defenders to take the ball away from their opponent.

There are quite a few variations on the defender playing position in soccer:

Outside backs, also known as full backs, line up on either side of the defense in soccer. They are responsible for providing support for the wide midfielder ahead of them and for facing down offensive wingers that make it to their area of the pitch.

Sweepers, also known as liberos, are a subtype of center back that act as the last line of defense. They are responsible for sweeping back and forth in front of the goalkeeper and then stopping any shots or passes attempted near their area.

Wing backs are a type of defender in soccer who play on the wings. They typically play a little further up than the rest of the defensive line. Wing backs also contribute to the offense a bit more than other defenders.

There are few important statistics that define a good defenders:

Blocked shots is a statistic that is recorded whenever a defender uses their body to deflect a shot away from the goal area. Blocking shots is a key stat for defenders because it shows how proficient they are in preventing shots on goal by getting in the way.

Interceptions are a statistic that is recorded when a player breaks up a pass made by an opponent and gains possession themselves. If a defender has a high number of interceptions, it means they are proficient in reading the attacking player’s passes and movements.

What is a defender in soccer?

In soccer, a defender is a position that is responsible for preventing the other team from scoring goals. Defenders typically stay in the defensive backfield in order to guard their own goal from their opponent’s attacks. In both offensive and defensive formations, the first number listed will mark how many defenders are in the formation.

What does a defender do in soccer?

The main responsibility of a defender is to protect their team’s goal from being scored on. Defenders divide this responsibility into two subsets. First, they support the goalkeeper by stopping the ball from entering the net or goal area. Second, they intercept the ball or perform tackles against opponent players to regain possession so that their team can begin their own attack.

How many types of defenders are there in soccer?

In soccer, there are four main types of defenders. The center backs work the center of the field and try to regain possession. Outside backs meanwhile work either end of the field. Wing backs stick to the wings and provide defense especially against offensive wingers. Sweepers are a subtype of center back that provide the very last line of defense before the goalie.