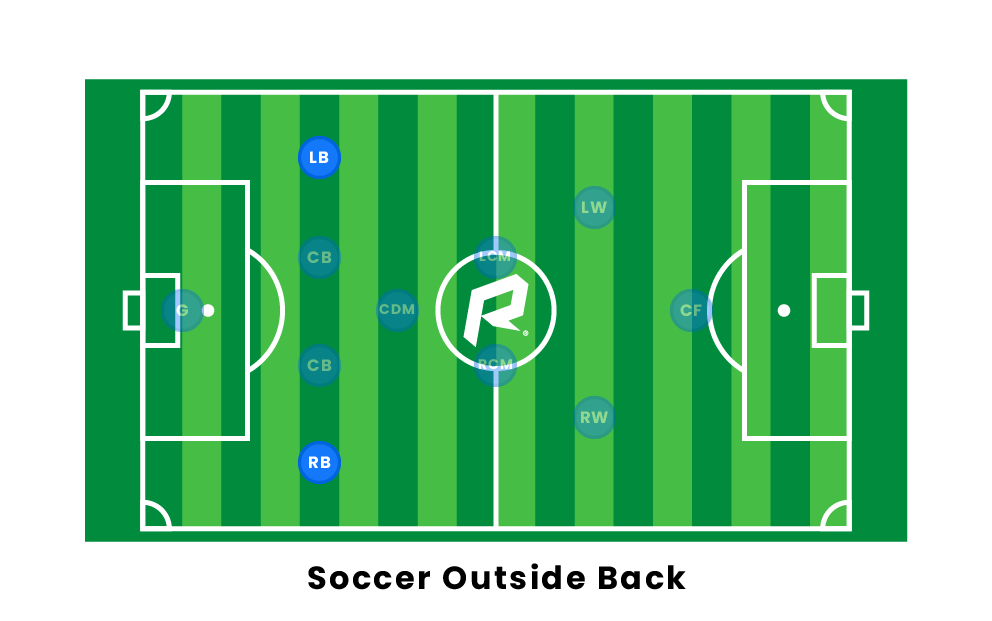 An outside back is a defender who patrols the outer edges of the pitch near the touchlines. They are usually two outside backs in a formation, a left back and right back. There are other names for specific types of outside backs, such as wing backs. Outside backs are responsible for defending the wings and starting the offensive build up through the midfielders. Read on to learn more about the outside back position in soccer.

Outside backs are typically positioned on the wings near the touchlines. They will either be on the left or right wings. In this way, outside backs can be considered the defensive counterpart to a winger on the offense. Instead of driving a ball up the wings toward the goal, outside backs push against wing-centric attacks by the offense and pass power back to their teammates in the midfield.

Outside backs are responsible for defending the outside portions of the pitch known as the wings. When the opposition is attacking from the wings, outside backs are responsible for slowing the attack down and gaining possession from the opposition. Once they regain possession of the ball, they must feed it back up to the midfielders or other attacking players.

Outside backs, first and foremost, must be excellent defensive players, as they are on the last line of defense before the goalkeeper. They must be especially good at one-on-one defense, as they will be guarding some of the quickest and most creative players on the opposing offense.

Outside backs also must be excellent passers, as they will be the start of most offensive build ups. A good outside back is aware of their spacing between them and the midfielders, and communicates well with them.

What is an outside back in soccer?

In soccer, an outside back is a type of defender who patrols the outer edges of the pitch near the touchlines. Outside backs are typically divided into left backs and right backs based on which side of the pitch they guard. Though they are mainly a defensive position, they can also help build offensive momentum by sending the ball to open midfielders after they’ve intercepted the ball from an opponent.

What does an outside back do in soccer?

In soccer, an outside back’s main objective is to defend the goal at all times. Though they do the general tasks of any standard defender, outside backs use a particular strategy in which they stay close to the touchlines and try to defend from the wings. In this way, they are a great response to an offensive formation using wingers to drive the ball towards the goal.

Pages Related to Soccer Outside Back