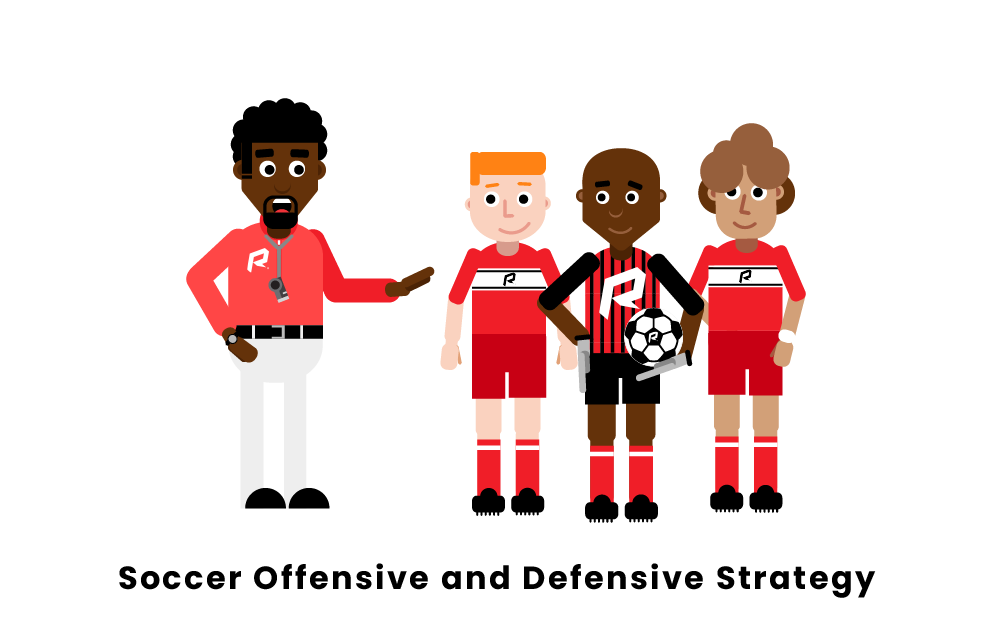 Teams are on offense when they're in possession of the ball. They try to move the ball through the offensive half of the field between the midline and opposing goal. Read on to learn about the basic tactics on offense in soccer.

A long ball is a pass that goes a long distance, such as a pass from one side of the pitch to the other. Long balls are used to make the defense reset on the other side of the field, which usually presents an opportunity to the ball further upfield.

Pressing is the strategy that requires aggressive man to man defense to create offensive chances. Pressing is based on defense, but mostly done so that the offense will have an opportunity to score right after a mistake, meaning the opposing team is not ready to defend. Pressing is when a team has its forwards high up the pitch closely marking the opponents back line of defenders in order to force a mistake.

Counter attacking strategy is the offensive tactic built around a team quickly moving the ball upfield when the defense has regained possession. This strategy works best with very athletic and fast attackers, who can take advantage of less defenders with their speed. Teams that use counter attacking as their main offensive strategy will often have a minority of possession in the game.

Breakaways are when a player gains possession behind the defense and has a 1 on 1 opportunity against the goalkeeper. Due to soccer's offsides rules, this usually requires great timing, or a great pass. A perfectly timed run will allow the player to be in line with the defense, and onside, while the pass is kicked.

If a foul is assessed and a free kick awarded near the goal, an offensive player who specializes in free kicks may try to score from the free kick spot (as long as it is a direct free kick). If it is an indirect free kick, they will try to kick the ball nearer the goal, where another player must touch it prior to scoring.

These players will attempt to either head or kick the ball into the net. A header involves redirecting the ball with a player's head. This principle also applies to corner kicks, and to passes originating from near the touchlines called crosses (as they cross the field of play).

Teams are on defense when they are not in possession of the ball. Each team will use different strategies to defend their goal and stop the opposing team from scoring on them.

Man-to-man defensive strategy is when a team assigns or dynamically chooses each player on their own team to defend a specific player on the opposing team. The idea is that by defending the player, the attacking team will make mistakes or the player will be subjected to a tackle and lose the ball. Man-to-man is not commonly used in soccer, because most players have zonal positions from the start of play and act based on their placement.

Zone coverage defensive strategy is when a team assigns each defender a specific area to defend. The idea is that if they are defending space, there is less chance for the defense to foul and less space to pass, so the opposing team will have their passes intercepted. Zone coverage is much more popular in soccer, especially since players are already divided into zones for each position.

The offside trap is a defensive strategy where the defensive team baits the attacking team into an offsides foul to gain back possession of the ball on a free kick. The idea is to gain possession of the ball without even tackling or intercepting the opposing team. This relies on all the defenders to communicate and move forward together in order for the attacking player to be caught behind them in an offside position.

What is a long ball in soccer?

A long ball is a pass in soccer that travels a far distance on the pitch. Long balls can either be vertical or horizontal. Vertical long balls are typically used to feed an attacker who is making a run toward the opposing team’s end. Horizontal long balls are used to make the defense reset on the other side of the field, opening up space for passes up the field.

What is an offside trap in soccer?

An offside trap occurs when the defensive team baits a member of the offensive team into an offsides foul so that they can regain possession of the ball on a free kick. This defensive strategy only works if defensive players are able to coordinate around the player with the ball until they are forced to cross out of bounds.

What is the most popular type of defensive strategy?

The most popular type of defensive strategy is zone coverage. This is because players are already typically separated into positions with specific areas of coverage and related responsibilities. Some players, such as center midfielders, will stay in one area and guard against anyone who enters that area. Other players, such as wingers, will slide up and down certain parts of the field and help stop anyone who comes near them during their sweep.