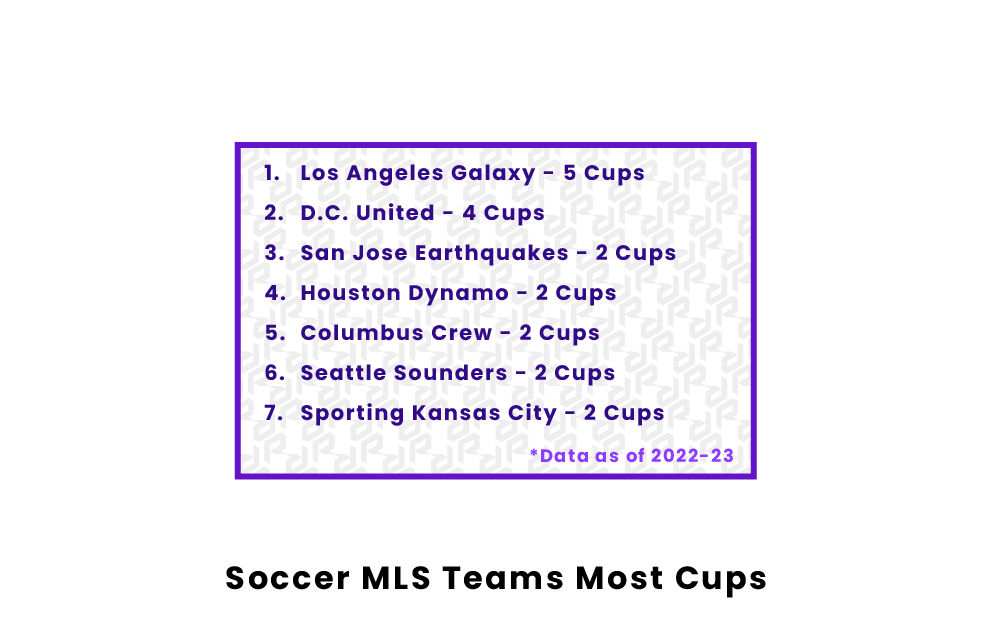 In the 25-year history of Major League Soccer, there have been 14 different winners of the MLS Cup. Teams must battle through 34 regular-season matches before entering a single-elimination playoff to fight for the championship. Some franchises have never won an MLS Cup, but others have hoisted it multiple times. Keep reading below to learn more about the teams with the most MLS championships.

Which MLS Teams Have Won The Most Cups?

These teams have won the most MLS Cups:

With five MLS Cups, the L.A. Galaxy is the most successful MLS team in history. They have had a number of European stars over the years, such as David Beckham and Zlatan Ibrahimovic, and that has helped them capture the most MLS Cups of any team ever. They won their first title in 2002, then won again in 2005. It was another six years before they returned to the top spot, but they did so in dominant fashion, winning back-to-back in 2011 and 2012. Their most recent MLS Cup win came in 2014.

D.C. United was easily the best MLS team at the inception of the league. They won the first-ever MLS Cup in 1996 and came back the next year to win it again. They were unsuccessful in 1998, but in 1999 they won their third Cup, giving them three of the first four MLS Cups. Their most recent championship win was in 2004, but since then, they have not been able to replicate the same level of success that their franchise had in its early days.

The San Jose Earthquakes are one of four MLS teams with two championships, but theirs are by far the oldest. The Earthquakes were great at the turn of the century, winning the MLS Cup in 2001 and 2003, but they have yet to win again since then. They finished as the top seed in the league in both 2005 and 2012, but they were unable to capitalize on that regular-season success either year. In the past decade, they have not finished higher than 10th in MLS.

The Houston Dynamo has perhaps the most interesting history of any team on this list. They were added to Major League Soccer as an expansion team in 2006, and they hit the ground running. Their only two MLS Cups in franchise history came in the first two years of the team’s existence, 2006 and 2007. Since then, the team has not returned to the championship or earned a number one seed, and their highest finish in the last decade was as the eighth seed in 2022.

The Columbus Crew had a much slower rise to the championship than the Dynamo. They were mired in mediocrity until 2004, when they won the league’s top overall seed. They did not win the championship that year, and it took until 2008 for them to be the league’s top seed again. That year, they finally brought home their first MLS Cup. They were once again the number one seed the following season, but failed to win the Cup, and for the next decade, they fell back to the middle of the league. In 2020, during the COVID-19 pandemic, the Crew won their second Cup in what was called the “MLS Is Back Tournament.”

The last team on this list with two championships, the Seattle Sounders have been one of the most consistent teams of the past decade. They were added to MLS in 2009 as an expansion team, and in 2014 they captured their first-ever top seed in the league. Two years later, Seattle won their first MLS Cup in 2016, and they came back in 2019 to win their second. Since being founded, the Sounders have never finished lower than the seventh seed.

Sporting Kansas City won the MLS Cup two times, in 2000 and 2013. A charter member of the MLS, Sporting Kansas City, often shortened to Sporting KC, was originally called the Kansas City Wizards, under which name they won their first cup. After a rebrand to its current name in 2010, Sporting KC built momentum, culminating in their second MLS Cup win in 2013. They defeated Real Salt Lake on penalties after tying 1-1 in overtime in the coldest MLS Cup final in history.

What MLS player has the most Cups?

The MLS player with the most Cups of all time is Landon Donovan, with six. Donovan started his career in San Jose, where he won two Cups in 2001 and 2003. After playing one season in Germany, he transferred to the L.A. Galaxy in 2005 and promptly won his third MLS Cup. Donovan went on to win three more Cups with the Galaxy in 2011, 2012, and 2014.

Which MLS teams have never won a Cup?