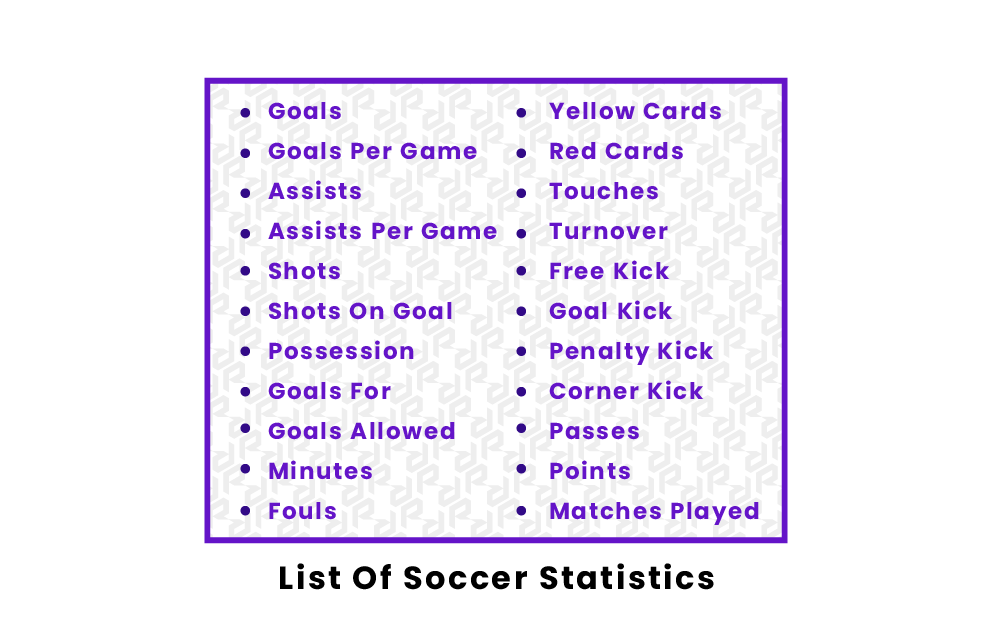 The game of soccer has not changed much since its inception. It is very basic and easy to track if you cannot watch it live or on television. The list below will teach you the meaning behind soccer statistics and show you how to follow what your team is doing during the game.

This accounts for how many goals a player has scored either in a single game, for their club team, national team, or across their entire career. The record holder for goals in a soccer career is Cristiano Ronaldo, with 807 goals at the end of the 2021-2022 Premier League season.

This stat illustrates how many goals a team scores per game. This can give the opposition an idea of how offensively skilled the team they are about to play is. This number is often very low because soccer is typically not a high-scoring sport.

Assists are when a player passes the ball to a teammate, and the next kick results in a goal. Players who create a lot of assists are very important for teamwork. One of the best assist makers in the world right now is Lionel Messi.

The assists per game statistic shows, on average, how many assists a player creates during one game. This is an average metric based on the player’s combination of assists and the number of games they have played.

This stat records all of the shots a team takes throughout the game. These shots are not based on whether they make it to the goal. They are based on the attempt of a player trying to shoot towards the net, even if it misses by a lot or a little.

Shots on goal are determined if the ball was on target to go in the net after it was kicked. This means it was saved by the opposing goalkeeper or a defender. Shots on goal are often displayed in parentheses next to the total amount of shots. Shots on goal can be recorded as an individual or team statistic.

This stat shows how long the team had control of the ball during the game. This is always measured in a percentage out of 100. For example, if your team had 51% possession throughout the game, your opponent would have had 49% possession.

Goals for is a stat for the team as a whole. It depicts how many goals the team has scored throughout a certain competition. These stats are often recorded during league play and can be important for tie-breaking situations.

Goals allowed are also a team stat. Goals allowed illustrates how many goals the team has given up during a competition or league season.

This stat shows how many minutes a player has been involved in the game. This is most often recorded as a game-by-game statistic and can be used when teams are looking to see if any of their players need rest.

Fouls are recorded on both a team basis and an individual basis. A foul occurs when a player pushes, grabs, or incorrectly tackles an opposing player. A foul can end in one of three ways; no card, a yellow card, or a red card.

Yellow cards are shown when a player makes an inappropriate challenge or tackle. The color yellow signifies a warning to the player. If the player continues to play recklessly, they may receive another yellow card, which automatically results in a red card.

While these cards are somewhat rare in soccer, they result in immediate disqualification. This happens when a player receives a second yellow card, makes a particularly bad challenge, or injures a player. Players are not the only people who can get a red card; coaches and players on the bench can be assessed a red for inappropriate behavior. Red cards are important to record because sometimes a player will get suspended for future games after getting a red card.

Touches are a statistic to show how much a player is involved throughout the game. A touch is defined as when the player makes contact with the ball. The more touches a player gets during the game, the more they are involved. Important players often have more touches than the rest of the team because they are more skilled and lead their team’s offense.

This stat signifies a turnover by a player or team. Turnovers frequently happen during a game of soccer, so these numbers can be very high. Unless a team is playing a possession-style game, there will be a frequent number of turnovers before the final whistle blows.

The amount of free kicks a team or player is given during a game is recorded by this statistic. A free kick occurs when a player is fouled. The ball is put back in play by an unguarded kick. A free kick can occur anywhere on the field.

Penalty kicks are one of the more exciting moments of soccer. They can be recorded either by team or player. A penalty kick occurs when a player is fouled in their offensive box. This results in a free shot one-on-one with the opposing goalkeeper. Sometimes, a game’s winner will be determined by a series of penalty kicks, known as a penalty shootout, when the game is tied after 120 minutes.

This statistic is mainly recorded on a team basis. A corner kick occurs when your opponent kicks the ball out of play over the end line in your offensive zone. You will get to kick the ball into play from the corner flag, giving your team a chance at heading or kicking the ball past the keeper. Corners are not successful that often, but they are very rewarding when played right.

The passes statistic can be recorded either individually or for the team as a whole. This covers the number of passes that a player or team makes throughout the game, regardless of whether the pass was successful.

Points refer to the number of points a team has in the standings based on the outcome of their matches played. In most soccer leagues, a team receives three points for winning a match, one point for a draw, and no points for a loss. At the end of the season or stage, the team with the most points either wins the league or moves on to the next stage.

Matches played, or games played, refers to the number of games a team has played in a particular competition. There are a certain number of matches played by each team in a league season or tournament, so recording how many matches have been played is vital.

What is an assist?

An assist is when a player passes the ball to a teammate, and the next kick results in a goal. Soccer is a team sport, so assists are one of the most important statistics to keep track of in soccer. A high number of assists is metric proof that a player is an excellent team player in a way that gets goals scored. The abbreviation for the assist statistic is the letter A.

What is goal differential?

What is SH in soccer stats?