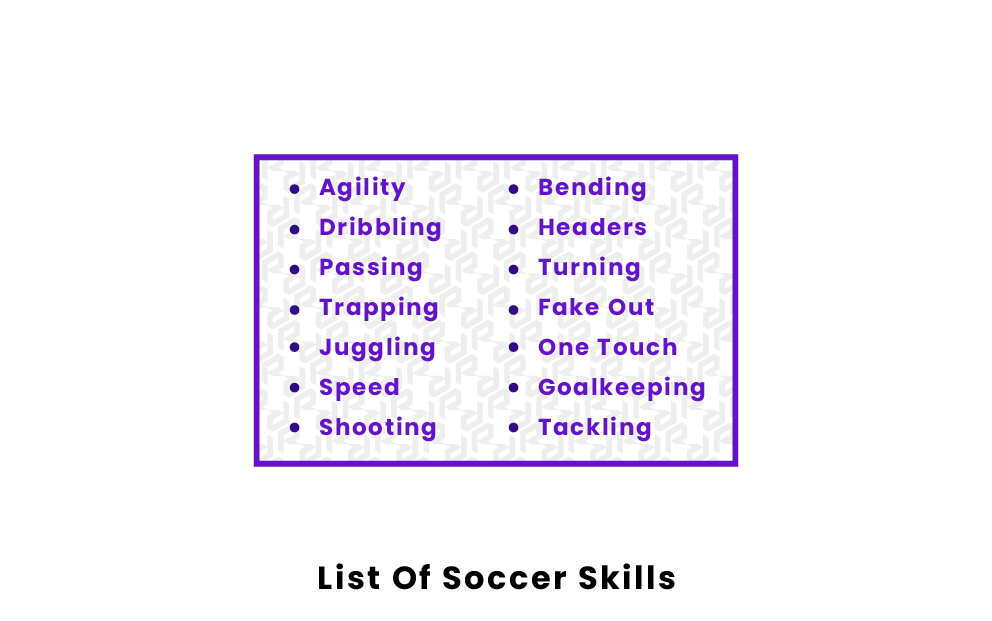 Soccer is one of the most popular international sports, and it takes a great amount of skill and practice to be a competitive player. While soccer is fun at all levels, gaining the skill and dedication to learn the sport properly pays off in the long run. Below is a list of soccer skills that are important to practice when learning this classic game:

Agility is a skill that can be extremely valuable in soccer, as many of the moves require speed and rapid changes in direction to be effective. An agile soccer player is much more capable of navigating around the defense on the field to score goals or assist teammates. To keep the defense on their toes, players need to use bursts of speed, dribble moves, and quick turns. A regiment of agility exercises is recommended for soccer players of all skill levels.

Dribbling is one essential way to move a ball up or down the field in soccer. Being good at dribbling relies on great control over the ball. While dribbling is one of the essential parts of soccer, many do not know how to dribble correctly. While a pass is usually performed with the inside of the foot, the proper way to dribble is with the front of your foot, laces first. This requires a great deal more control than using the inside of the foot but is much faster getting the ball up the field and worth the practice. Your legs should not be straight while you dribble, and you should be bending your knees for more mobility and speed.

Soccer should never be a one-person show. Having trust and communication with your teammates is essential, and one of the ways to practice this is passing. Passing is a skill in soccer one never stops using. It is how the ball travels from player to player. There are many ways to pass, but the most standard way is by using the inside of your foot to pass. Practicing passing skills such as one touch, through balls, and crosses will help you to become a better all-around player.

Trapping is a basic motion used for ball control that every soccer player needs to master. When receiving a long or wild pass, players trap the ball to tame its motion and bring it under control. They use short kicks or taps of their toes, depending on whether it is coming in low or high. There are many different ways to trap, but gaining control of the ball is all that really matters. Trapping is a skill that can be refined over a lifetime; one of the differences between an amateur and a professional is in the quality of their first touch of the ball.

Juggling is a skill that you may not use during a game but is an exercise most players learn at a younger age. Juggling involves keeping control of the ball in the air by using different body parts. Practicing juggling gives players a greater sense of confidence with the ball and helps strengthen coordination. When you work on juggling, make sure to be using your thighs, feet, chest, and head.

Speed in soccer is essential to getting past your defenders, winning races to the ball, and chasing down opposing players. No matter the position you play, being a fast runner will help your game immensely. Practicing speed drills with or without a ball will help you become a quicker player.

Being able to land more goals than the opposing team is how a team wins the game. Getting the ball past a goalie is a feat in itself. It’s great to practice shooting with your goalie before a game. Try to go with the element of surprise when shooting by using your non-dominant foot. Have a purpose and aim behind your shot so that you can beat the goalie and send the ball into the net.

Bending the ball is when a player kicks the ball in a way so that it will curve in mid-air. While bending the ball is not an essential skill, it can come in handy by airing on the side of the unexpected. This technique uses the outside of the foot and makes contact with the ball right behind the smallest toe. The curve is mostly used when there is a free kick at the goal, as the bend of the ball will catch the goalie off guard. It can also be used while playing but takes extreme skill. When done correctly, the ball will create a curve when kicked rather than going straight.

As soccer is a no-hands sport, using a header at the right time can be a great way to get a ball out of the air. Using the top front of the head, you can gain control of an airborne ball by knocking it back down to your feet or by heading it to another player on your team. Be careful when heading the ball, and learn to do it correctly in a practice setting before executing it during a game. To perform a header correctly, hit the ball with your forehead by striking it, do not let it fall onto your head with force.

Turning is another great way to keep the opposing team on their toes. By changing your direction with intent, it will wear down opposing players who are trying to keep up with you. There are many different ways to turn while in possession of the ball, and turning is usually used to avoid the other team stealing the ball. By doing quick turns, you keep the opposing team guessing and have more time to make a pass or take a shot.

A one touch in soccer is when a player either passes or shoots a ball immediately instead of trapping or dribbling it. Practicing one touches is a training exercise in which players learn to utilize their timing and control when they receive the ball. It easily translates to gameplay, as it trains player’s in quick thinking and precision, making it so that the opposing team doesn’t have time to take control of the ball.

Most soccer teams have players who are designated goalies or keepers, but on more amateur levels, the role of goalie is often interchangeable. The goalie is the only position on the field where using one’s hand is allowed. It’s important to practice as a goalkeeper to raise your confidence in your ability to block and save the ball from making a goal. Practicing with a player shooting on you as a goalkeeper will help improve your reflexes and decision-making. The keeper must learn to read the player's body language and use it to their advantage when defending the goal. Keepers should also be good at clearing a ball with their feet by doing a dropkick and getting it out of their zone.

Tackling is an essential defensive skill to master, as it consists of taking possession of the ball away from an attacking player. The three main types of tackles are poke tackles, block tackles, and slide tackles; each one is performed in a slightly different manner. A good defender will rely on their positional awareness to avoid becoming isolated, but in one-on-one situations, a well executed tackle can mean the difference between a turnover for your team or a goal scored against.

What are the most important skills in soccer?

The most important skills in soccer are ball control, passing, and receiving the ball. Other key fundamentals for soccer players are footwork, dribbling, shooting, precision, trapping, and positioning on the field. Some general athletic abilities that are essential for soccer players are stamina, speed, and discipline.

What is the easiest position to play in soccer?

Though there is no position in soccer which is “easy” to play, there are some positions that require slightly less effort or skill than others. Perhaps the “easiest” position to play is that of fullback, a player that guards the outer edges of the pitch and is the last line of defense before the goalkeeper. Fullbacks do not have to run as much as other defenders, and the zones they guard are not as commonly attacked as the middle of the field.

What is the hardest position to play in soccer?

Many people consider the position of goalkeeper the hardest position in soccer. This fact is a result of the tremendous pressure goalkeepers are placed under during a game. Goalkeepers must be quick and strong in order to defend against fast-moving goal shots, which requires a unique skill set that makes them invaluable to a soccer team. A good goalkeeper can save their team from a crucial loss, while a poor goalkeeper can be a massive hindrance. In a sport where every point counts, goalkeepers are undoubtedly the most important player on any soccer team.

How can you improve your soccer skills?

Without a doubt, the easiest way to improve your soccer skills is to practice them in your spare time, either at home or at an athletic facility. Fortunately, soccer relies upon skills that can often be easily practiced in your backyard, with nothing more than a soccer ball. Practices such as juggling exercises, dribbling, and trapping exercises can all be performed at home. For skills that require more than one person, such as passing, practicing is as easy as gathering a friend or group of friends and taking a soccer ball to a gym or park.