How Much Does A Soccer Player Make? 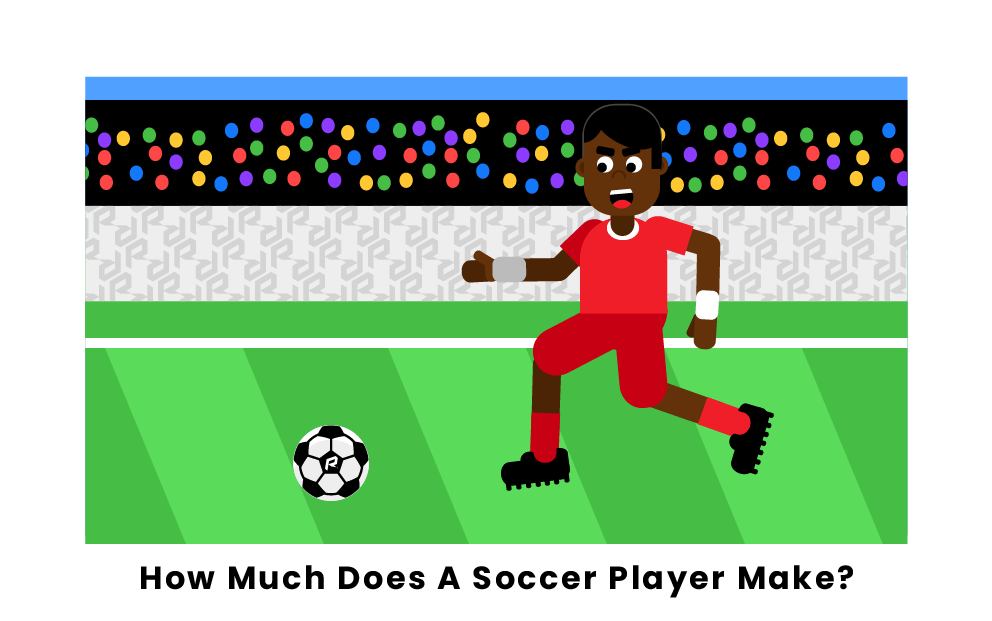 Soccer is very different from many other sports in terms of the players’ compensation. This is due to the large variance in professional soccer players’ salaries. In Europe, where the sport is known as “football,” there are many leagues regarded as top-class divisions with teams that pay high salaries. Although the amount can vary, the average salary for professional soccer players worldwide is around $60,000.

How Much Do Soccer Players Make?

The world of professional soccer consists of many levels of skill and commitment that dictate how much money the leagues and players make each season. There are a total of 209 men’s professional soccer leagues active today. Of these, some are fully professional while others are barely considered professional, as the players play more for a hobby than for a living and often carry second or third jobs.

The top five highest-paying countries measured by salary per year on average are:

England’s Premier League has long been considered the best and most competitive league in all of club soccer. The average annual salary for players in the Premier League is just under $3.9 million. La Liga, the top league in Spain, comes in next. With average player wages sitting at about $2.75 million per year, there is a lot of money to go around in the world’s second-richest league. Italy is the third-highest paying league, with Serie A players’ yearly salaries coming in at an average of $2.23 million. The fourth-wealthiest league is Germany’s Bundesliga, with players making an average salary of $2.05 million per year. Finally, rounding out the top five highest-paying leagues is France’s Ligue 1, which pays players an average of $1.54 million every year.

In England alone, there are seven levels of the “football system.” At the top is the Premier League, and at the bottom, there are lesser-known leagues. The Premier League has average wages of around $3.9 million a year. In the division right below it, the Championship, the average player’s salary is around $200,000 per year, a massive drop from Premier League salaries. League One, the third-highest level league in England, sees players make roughly $50,000 a year.

In other countries, soccer leagues and their salaries are much different than in England. In the United States, for example, there are only a few soccer leagues, with the top league being Major League Soccer or the MLS. In the MLS, the average salary for players was slightly under $500,000 in 2022, which was a 14% increase from the 2021 season. Comparing this to the Premier League, many MLS teams' entire player salaries are less than that of one player on teams in Europe or England, specifically.

To take a closer look at the monstrous difference in pay between the Premier League and the MLS, Atlanta and LA Galaxy have the highest total payrolls in the MLS, listed at just over $20 million. The highest paid player in the MLS is Chicago Fire player Xherdan Shaqiri, who makes just over $8 million a year. In the Premier League, Manchester United’s total team wages sit just below $300 million per year, about 15 times the amount of the MLS’s highest-paying teams. Cristiano Ronaldo individually makes over $34 million a year from his contract at Manchester United alone, not counting any of his endorsement deals. He makes about twice as much as the highest-paid MLS teams and more than triple other teams in the MLS.

While soccer in the United States and Asia has been gaining popularity, the sport has long been a staple in South America. Despite the sport’s popularity in South America, the salaries are meager compared to Europe’s top teams. There is an emphasis on winning and the culture of soccer in South America, leading teams in those divisions to focus on building a team that is affordable yet able to compete at a high level rather than overpaying for big-name players.

The Brazilian Serie A, the highest of the four leagues in Brazil, sees most players at or just above the country’s minimum wage. This means many players only make around $220 a month, which is very low compared to other football wages around the world. The compensation for top-tier players in Serie A ranges from $2,500 a month up to around $125,000 for elite players. These numbers are significantly less than those of England and most of Europe and therefore lead to lots of South American players traveling overseas to seek higher salaries.

Who is the highest paid soccer player ever?

Each year, it seems that player salaries in soccer continue to rise, especially among Europe’s elite clubs chasing the Champions League trophy. In 2022, Kylian Mbappe became the highest-paid soccer player after signing a contract worth $62 million per season. His teammates, Lionel Messi and Neymar Jr., are the second- and third highest-paid, earning $41 million and $36.5 million per year, respectively. Cristiano Ronaldo is fourth in salary at around $35 million a year. It is important to note that many of the contracts have incentive-based earnings in place that can earn players even more money.

What is the average salary of a pro soccer player?

The average salary for a professional soccer player across all of the world's leagues comes to around $60,000 per year. However, there are so many different factors that raise or lower wages in professional football. In many countries in Europe, this average is much higher due to high demand from fans. In countries like the United States, there is not enough demand, so players are paid a lot less. Furthermore, in less developed countries like Brazil, even the fans' love for football does not translate into high wages. Due to poor economies, the players do not make a lot of money, especially relative to their counterparts in Europe.

Pages Related to How Much Does A Soccer Player Make?