How Does Scoring Work In Soccer? 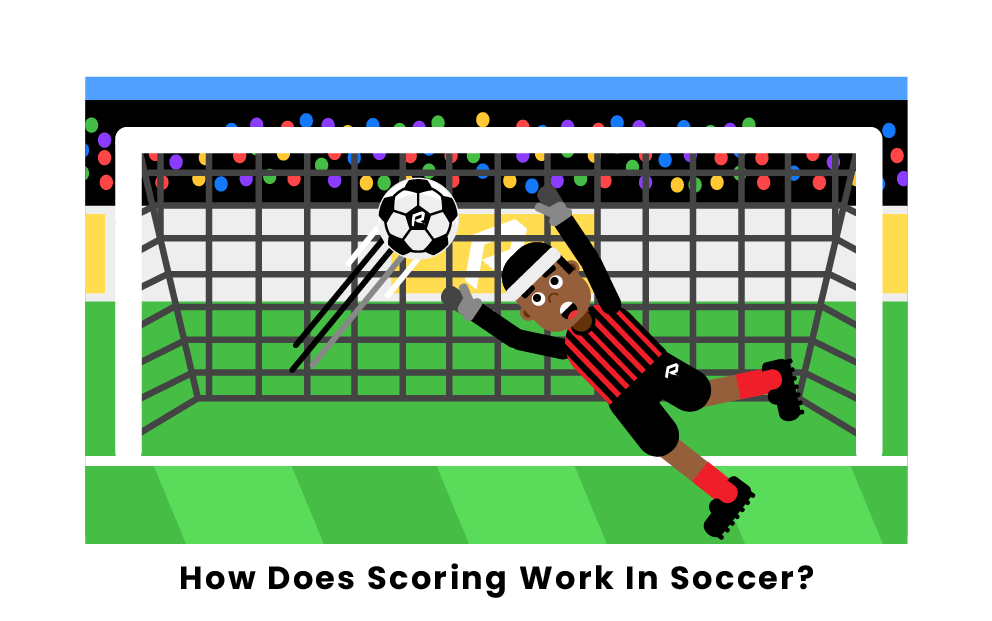 Scoring in soccer happens when the ball goes into the opponent’s goal. According to the International Football Association Board (IFAB) Laws of the Game: Law 10, the ball must be under the crossbar between the goalposts, and the whole ball must cross the plane of the goal line. The goal will count only if the scoring team has committed no penalties. Goals are worth one point in soccer.

Soccer games typically last 90 minutes, with two 45-minute halves. Ultimately, the team that scores the greater number of goals wins. If both teams score an equal number of goals or no goals, the game either ends in a tie or goes to extra time, depending on the competition.

There are numerous ways to score a goal in soccer and many situations where there is a chance to score. The main ways of scoring in soccer are:

A strike is a shot on goal using the feet. Players can strike the ball from anywhere on the field. This is the most common way for soccer players to score goals. Using the foot to strike the ball is the most powerful way to shoot a soccer ball. Players also are typically very accurate when striking the ball with their foot, making it an effective way to score a goal.

Headers are another common way of scoring goals in soccer. Scoring on a header occurs when a player puts the ball into the goal by deflecting it off of their head. Headers are usually attempted in close proximity to the goal when a cross is made to the middle of the box or during a corner kick. These are both situations in which the ball is in the air when approaching a teammate, making it easier to use the head and harder to use the feet.

Scoring on a volley happens when a player strikes the ball out of the air with their foot into the net. A volley is a relatively difficult shot to make in soccer, as it requires impeccable timing and coordination. Most volley goals are scored when a player receives a cross or kicks the ball after the other team has attempted a clearance.

A free kick goal is a goal scored on a free kick. A free kick is an unopposed kick from the spot where a foul has occurred. Opposing players are not allowed to come within ten yards of the free kick taker until they have struck the ball. Some free kicks are taken from just outside the penalty area and thus have a good chance of being on target.

An own goal is a goal scored by a player on their own team’s net. While own goals do not happen every game, they are not a rare sight. Own goals will typically occur when a defending player attempts to redirect or clear the ball away from the goal but mistakenly hits it into their own net.

Aggregate scoring in soccer is a scoring system used to determine the winner of a two-legged stage in a knockout round. Two-legged stages are a set of two games between the same two teams, one home game and one away for each. For aggregate scoring, the total number of goals scored within the two matches is declared the winner of that stage and will move on to the next round. Aggregate scoring can also be used to determine winners in multi-game tournament stages, such as the group stage of the World Cup.

If teams are tied in the aggregate scoring, the away goals rule will typically be used to decide the winner. This means whichever team scored the most goals as the away team is declared the winner. In competitions that do not use the away goals rule, such as the UEFA Champions League, tied stages will be settled by extra time and possible penalty kicks.

In soccer leagues, teams are ranked in terms of points awarded for wins, draws, and losses. A win results in a team getting three points towards their total. A draw results in both teams receiving one point in the standings. If a team loses, they are not awarded any points. At the end of the season, the team with the most points wins the league title.

How do you score in soccer?

To score in soccer, a player must shoot the ball inside the opposing team’s goal, and it must fully cross the goal line. As long as no fouls have happened leading up to it, the goal will count. The ball must have been between the goalposts and under the crossbar. The last criterion is that the whole ball must have crossed the goal line inside the goal. Goals can also be scored through penalty kicks, corner kicks, and goal kicks, which depend on varying situations.

How many points is a soccer goal?

One soccer goal is equivalent to one point. There’s no limit to how many goals a team can score as long as it’s within the parameters of 90 minutes. However, if no team has scored any points and it remains 0-0 at the end of the match, a referee will award extra time if the game requires a winner, like in knockout tournament matchups. Extra time is implemented in the hopes of one of the teams breaking the tie. On the other hand, the game may end in a tie if a winner isn’t required for advancement in a tournament or deciding rankings.

How are rankings determined in soccer?

How do you score more goals in soccer?

Scoring more goals in soccer requires precision, power, and exceptional shooting skills. Practicing accuracy on different types of shots and from different locations in the field can help score more goals. Players should keep their shots low and attempt to shoot towards the corner of the goal. This combination makes it difficult for the goalkeeper to keep the ball from entering the goal. Shooters should also kick with significant power and increase their follow-through to increase the chances of scoring.

Pages Related to How Does Scoring Work In Soccer?