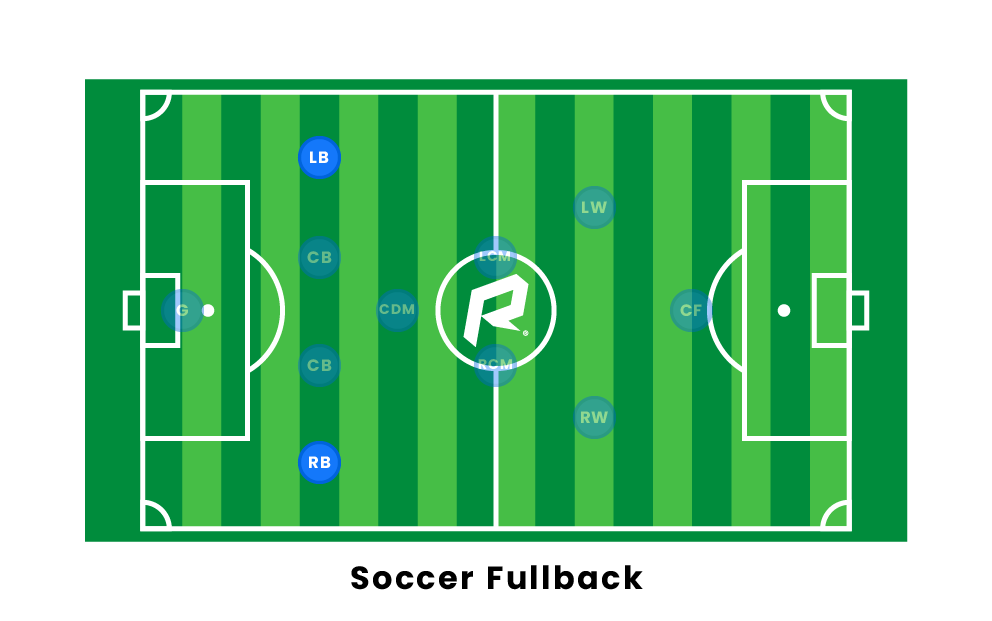 Fullbacks, also known as outside fullbacks, are a type of defender in soccer whose primary goal is to play defense on the outer edges of the pitch. Though they are mostly focused on defense, fullbacks may help with offensive counter attacks from the wings. There are typically two fullbacks on each team, starting the game lined up outside of the center backs on either side of the pitch.

A fullback is a player who will be lined up defensively to start the game at the outer edges of the pitch, often only a few yards from each touchline. As the game is played, fullbacks are asked to support the attack, running forward on offense and then sprinting back on defense to support the center backs.

Though most fullbacks are depended upon as defenders, some elite fullbacks are equally skilled at offense and are called attacking fullbacks. These players help provide deep defense on their ends of the pitch but then heavily push forward once their team has regained possession of the ball.

Fullbacks are positioned on the outermost point of the defensive line in soccer. They will stay on their respective sides of the pitch throughout the game, while occasionally providing interior support to the center backs. Thus, fullbacks are typically covering opposing wings and other attacking opponents.

Fullbacks are on the last line of defense before the goaltender, and are responsible for defending the wings. At the professional level, fullbacks are often rangy players that can make an overlapping run and be an offensive threat from the wing. The fullback’s main job is to defend against crosses and put pressure on plays developing from the outside channels.

First and foremost, fullbacks must be excellent defenders. As a defensive position, fullbacks are the last line of defense, and must be capable of defending the wings and supporting central defenders.

Fullbacks are often quicker and better dribblers than central defenders. They will also participate in the offensive buildup, so they must have good field vision to make good passes.

What is a fullback in soccer?

In soccer, a fullback is a type of defender whose main responsibility is to play defense on the outer edges of the pitch. Though they typically play wide, fullbacks can help protect the center as well if there is a gap in coverage. Fullbacks can also help move up and down the sides of a pitch in a role similar to a winger during offensive counter attacks.

What does a fullback do in soccer?

In soccer, the primary responsibility of a fullback is to be the last line of defense before the goalie. They generally stay on their respective sides of the pitch and guard that zone from oncoming members of the opposing team. In addition to this main role, fullbacks occasionally provide interior support as well as help push offensively down the wings of the field.

What is an attacking fullback in soccer?

An attacking fullback is a specific type of fullback who specializes in heavy offense once their team has regained possession of the ball. This modern style of fullback has increased in popularity and usually arises from a fullback who has explosive potential on the offense. Attacking fullbacks have their disadvantages though and can cause gaps in defensive coverage while pushing the ball forward.