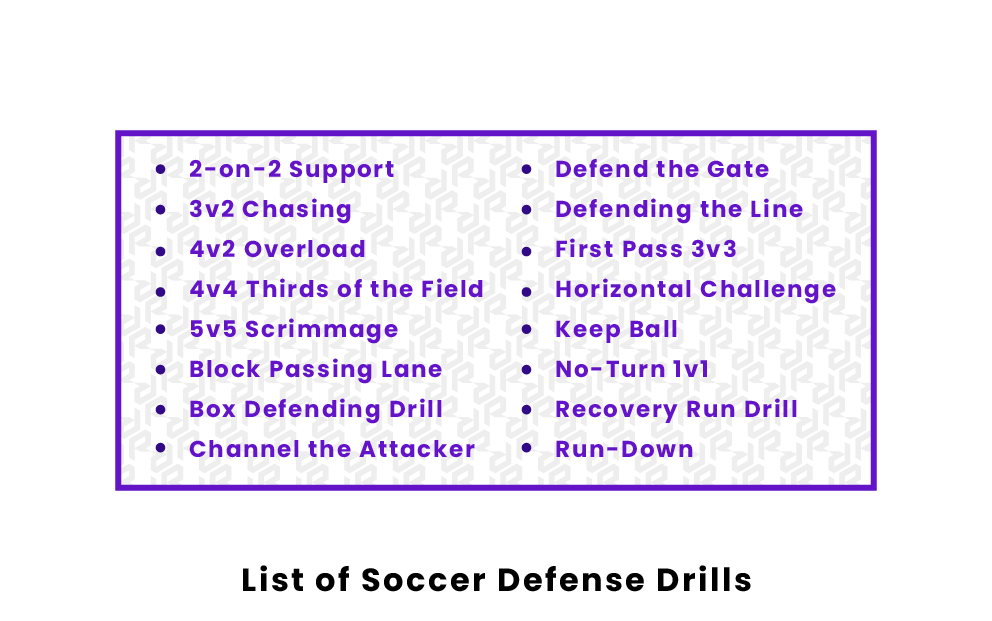 Defense is one of the most important aspects of soccer, and every player should know how to effectively defend the field. In order to improve a player’s defensive skills, there are a variety of drills one can perform to enhance vital aspects of defending in soccer. Read on for a list of drills that can be used to enhance your defensive skills on the soccer field!

This drill enforces individual defensive skills as well as proper defensive positioning. A pair of defenders will pass the ball out to a pair of attacking players, who will attempt to score. One defender will move up to directly challenge the striker, while the other defender will support from behind. This drill also helps improve defensive angles, timing, and footwork.

In this timed drill, two defenders face four attackers in the final third of the field. The attackers attempt to score as many goals as possible before time runs out. This drill will help defenders improve their speed, communication, and commitment. By over-training for an overmatched situation, defenders will be better prepared for 3-on-2 and 2-on1 situations in games.

4v4 Thirds of the Field

This drill is perfect for perfecting formation shape and positioning on the field. Two opposing teams of four face off on a 40 x 25yd training grid with a goal at each end. Each team has one defender, two wingers, and one attacker, with each position confined to one third of the field. This drill also enforces communication, passing, and ball control.

Put two goals on one half of the field, apart from each other. Two teams of five will compete against each other, trying to score goals and stop the other team from scoring. While this is also an attacking drill, it is a great way to force all players to play defense within a small area in a game-like situation.

This is a drill specifically designed to train defenders on heading and clearing crosses from attackers. A pair of defenders will stand in the box while three attackers kick crosses and attempt to score on a header. As soon as a defender successfully heads and clears the ball, they will drop back into the box to defend the next set of attackers.

Channel the Attacker (a.k.a. Shepherding)

Defenders and attackers take turns facing off one-on-one. Attackers will attempt to dribble the ball and get past the defender, then through one of three gates that are formed with cones. The gate closest to the attacker’s starting position is worth the least amount of points, with the farthest gate earning the most points. This drill is great for training defensive footwork, closing speed, and individual defensive tactics.

Set up this one-on-one drill by creating a playing grid about 10 yards wide and 20 yards long with a set of cones. A defender starts at one end of the grid (the “gate”) and the attacker at the other. They charge at each other, with the attacker attempting to get past the defender and out the other end of the gate. This drill is perfect for training ball control and one-on-one moves and footwork.

In this drill, one or more defenders line up and pass the ball to an attacker. The attacker tries to evade the defenders and dribble across an imaginary 10-yard goal line. The defenders must work together to mutually guide the attacker away from the goal line by exerting pressure.

This is a good drill for getting a lot of players involved at once and practicing closing down on offensive players. Create a 25x25 yard grid with groups of three players standing on two separate sides of the grid. One player from either side will kick the ball into the other team, who will then try to dribble over that team’s endline. If the defensive team steals the ball, they can do the same to the other team’s endline.

This drill helps develop defensive timing and agility when defending against goal-scoring attempts. An attacker will attempt to dribble the ball from one end of the top of the penalty box to the other. A defender will keep pace along the penalty line, trying to intercept the ball or block shot attempts. The attacker is free to change speed and direction throughout the drill.

In a small area, have three players dribbling around with one defender trying to steal the ball from each of them. The defender should try to steal all three balls as quickly as possible, racing against other defenders who are trying to do the same in their own area. This is a great way to practice putting pressure on the ball.

This 1v1 drill puts more emphasis on the defender than the offensive player. The attacker will receive the ball at the top of the 18-yard box with their back facing toward the goal. The defender is right behind them and should work to prevent them from turning toward the goal and getting a shot off. The defender should try to steal the ball, force a bad shot, or kick the ball outside of the box.

This is an exhausting drill but great practice for a defender. Two players start at midfield, one with the ball and one without the ball. The player with the ball will start sprinting and dribbling toward the goal. When they get a few yards away, the defender has to run after them and stop the attacker from scoring or getting a good shot off.