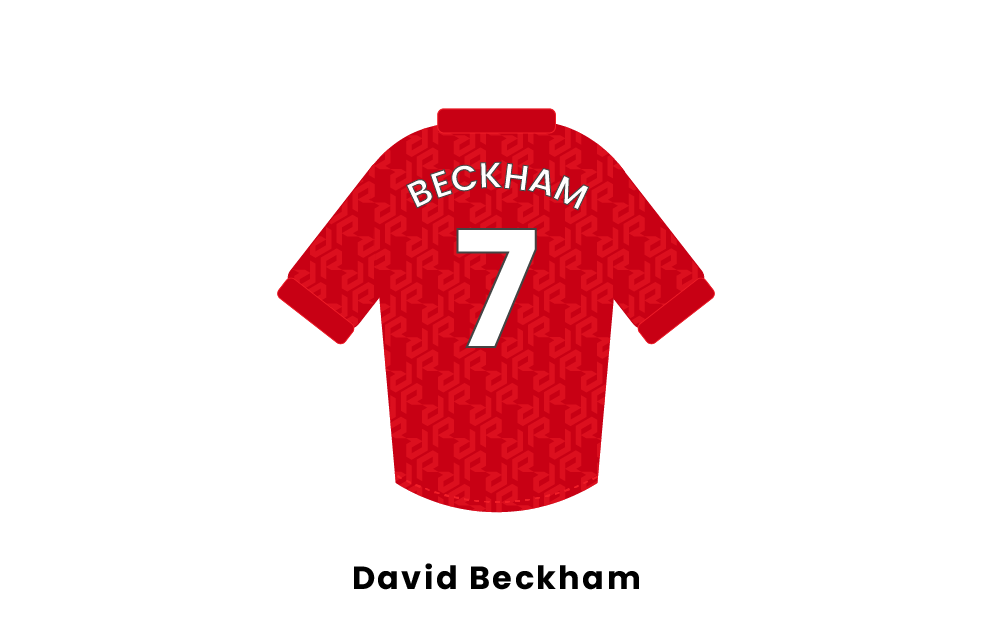 David Beckham is a retired professional soccer player who gained international fame on and off the field. He started his professional career playing for Manchester United and ended it with Paris Saint-Germain. He is the first British player to earn titles in four different countries: England, Spain, USA, and France.

Outside of his soccer career, Beckham’s popularity grew after getting married to Victoria Beckham. He is also known for his modeling, sponsorships, and being a spokesperson. Beckham is also very involved with UNICEF as he supported their work while playing for Manchester United. He also became a UNICEF Goodwill Ambassador in 2005 with a focus on the sports for development program. David Beckham is known both for being an extraordinary midfielder and for his business ventures as well.

Beckham began his soccer career as a part of the youth team for Manchester United in 1991. For the 1994-95 season, he went to Preston North End on a loan to gain some additional experience. Soon after, he became a professional player for Manchester United and helped the team win both the 1995-96 Premier League title and the FA Cup.

Beckham continued to succeed at Manchester United for almost a decade as they won the Premier League title again in 1997, 1999, 2000, 2001, and 2003. In 2003, he left and joined Real Madrid. In his last year with them, he helped Real Madrid win the La Liga championship title.

Beckham eventually signed a deal with the MLS team, the Los Angeles Galaxy, in 2007. In 2008, he played for the Italian club, AC Milan on a loan. After he returned, Beckham helped the LA Galaxy win the MLS title in 2011 and 2012. In 2013, he signed a deal with Paris Saint-Germain (PSG) and won the league title with them. After just one season with PSG, he retired from his professional soccer career.

In 2003-04, he won the Spanish Super Cup with Real Madrid. In the 2006-07 season, his final season with Real Madrid, they won the La Liga title. He was a two-time MLS Cup Champion with Los Angeles Galaxy in 2011 and 2012. Beckham then went on to win the French Ligue 1 title in 2012-13 with Paris Saint-Germain. Beckham was also inducted to the English Football Hall of Fame in 2008. Lastly, in 2004, Beckham was named one of the world’s greatest living players in the FIFA 100 list.

Soccer was a big part of David Beckham’s life when growing up. At 11 years old, he won the Bobby Charlton Soccer National Skills competition which caught the attention of Manchester United officials.

In 1997, Beckham met Victoria Adams from the Spice Girls and they quickly fell in love. On July 4th, 1999 they got married at a castle in Ireland. The couple gained increased media attention due to their joint celebrity status. The media attention also focused on their dressing, hair, and style. David and Victoria have four children: Brooklyn who was born on March 4th, 1999; Romeo who was born on September 1st, 2002; Cruz born on February 20th, 2005; and lastly, a daughter, Harper born on July 10, 2011.

What position did David Beckham play?

Beckham was known for being a midfielder (usually right or center) and has been regarded as one of the greatest free kickers. He had a strong range of passing, and the ability to kick accurate long balls, bending free-kicks, and crossing ability unlike any other. This helped him excel as a midfielder and help create more opportunities for his teammates to score goals. Beckham also was known for his defensive work-rate on the field and stamina.

How many championships has David Beckham won?

Is David Beckham a fashion icon?

Yes, Beckham is often considered a fashion icon. He and his wife became known for attending events in matching outfits at times. Beckham was also known for his range of haircuts from frosted tips, bleached hair, mullet, shaved head, ponytail, and more. Although he played around with some bold fashion choices, Beckham became known for a luxurious and sponsored style. He campaigned for fashion, beauty, alcohol, and luxury car brands. He also designed a men’s collection with H&M and was hired by Bentley and Jaguar for sponsorships.